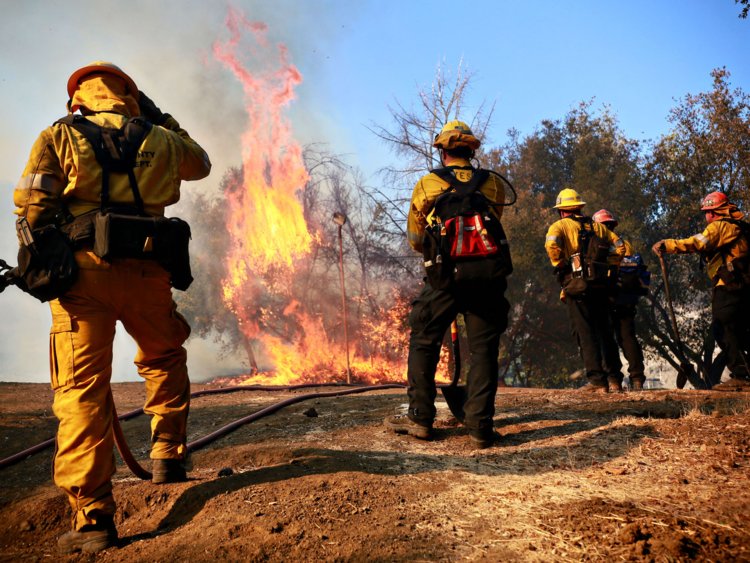 As multiple devastating wildfires raged across California, a private firefighting crew reportedly helped save Kanye West and Kim Kardashian’s home in Calabasas, TMZ reported this week. The successful defense of the $50 million mansion is the most prominent example of a trend that’s begun to receive national attention: for-hire firefighters protecting homes, usually on the payroll of an insurance company with a lot at risk.

The insurance companies AIG and Chubb have publicly talked about their private wildfire teams. AIG has its own “Wildfire Protection Unit,” while Chubb—and up to a dozen other insurers—contract with Wildfire Defense Systems, a Montana company that claims to have made 550 “wildfire responses on behalf of insurers,” including 255 in just the past two years. Right now in California, the company has 53 engines working to protect close to 1,000 homes.

The TMZ story feels uniquely 2018—financial capitalism, inequality, KimYe, the fires of Armageddon—and it is, for Americans at least.

“If the idea of private firefighting strikes us as an oddity nowadays, it should,” Benjamin Carp, a historian at Brooklyn College CUNY, told me. “While other societies throughout history have relied on private firefighting companies to protect the property of the upper classes … for the most part, we … have accepted the idea that fighting fire ought to be a public good.”

In London, firefighters worked explicitly for insurance companies during the 18th and 19th centuries. “Each insurance company maintained its own fire brigade, which extinguished fires in those buildings insured by the company and, in return for a fee to be paid later, in buildings insured by other companies,” the economist Annelise Anderson has written.

The United States might have been expected to inherit a similar system, but instead, volunteer fire departments became the most common means of fire protection. Insurers might give bonuses or other support to these groups, but firefighting was primarily a civic rather than commercial enterprise. These fire clubs were important social institutions, often commingling middle-class and working-class men of many ethnicities in the virtuous activity of defending their city from conflagration, according to the historian Amy Greenberg’s Cause for Alarm: The Volunteer Fire Department in the Nineteenth-Century City.

David Torgerson, the president of Wildfire Defense Systems, disputed any characterization of his particular company as fighting fires only on behalf of the rich. Ninety percent of the homes they protect, he said, were “average-value homes,” contracted through normal insurers, not the specialty companies that take on high-net-worth individuals’ properties. “If the fire hits Malibu, there will be a lot of high-value houses,” Torgerson told me. “If it hits somewhere in Utah, there won’t be.” In either case, he says, Wildfire Defense Systems will respond. Many types of regular old fire insurance can come with his company’s service. “We serve nearly a dozen [insurance companies],” he said. “If anybody wants to have this supplemental response capability during a fire, they need to pick an insurance company that has it.”

“There are not that many solutions in climate change,” he argued. “If we have a growing problem with wildfire—and it is statistically getting worse—why limit the ability to bring resources that the taxpayer doesn’t have to pay for and policyholders don’t have to pay for?”

In the 19th century, there were obvious reasons for residents to fight fires all together. Great calamities of many kinds wiped out huge chunks of people and property within new industrial cities. The Stanford historian Richard White calls the rough-hewn communal politics of these urbanities “a democracy of defecation.” “Like feces and urine, neither fire nor disease respected property boundaries,” White wrote in The Republic for Which It Stands. “Water and sewer systems had to cover and protect everyone. Cities were like ships; they sailed, and sank, as a whole.”

And thus the first metropolitan fire services were born. Professionals, paid by the city, took over from the volunteers. They got a push from the new technological possibilities of steam engines, which reduced the need for human labor but required more specialized technicians to operate them. Pro firefighters were needed, and municipal governments centralized the power to wield them and the funds to pay them.

This is the system that urban Americans encountered in the 20th century: the trusty fireman, the firehouse, the dalmatians, all that. But over decades, urban firefighting benefited from stricter building codes and strong unions that kept departments staffed up. The development of wildfire management has been quite another thing, as the Arizona State fire historian Stephen Pyne has noted.

From the early years of the 20th century until the late 1960s, the U.S. Forest Service adopted a line of fire suppression. Every fire was supposed to be put out, even in wildlands that scientists later discovered needed to burn. “An estimated 54 percent of California ecosystems are fire dependent, and most of the rest are fire adapted,” Pyne wrote in California: A Fire Survey. Fuel built up and natural cycles ground to a halt. Finally, after 1968, the Forest Service reversed course and began haltingly walking back its no-fire-is-good policy.

Wildland firefighters have to manage forces that are fundamentally beyond their control. Urban firefighters, on the other hand, still want to put out every fire. Meanwhile, urban sprawl and exurbs continue to push farther and farther into rural and wild areas.

Problems arise at the wildland-urban interface, where sprawl or exurb—which has to be protected like a city—meets backcountry that evolved to burn, and should do so.

This interface is exacerbated by a troubling chasm. Since 1968, when the Forest Service started taking a more naturalistic approach to letting wildfires burn, it has also cut full-time fire staff. But the fires—driven by climate change and an expansion of that same wildland-urban interface—have grown more destructive. The Camp Fire has killed more people and destroyed more buildings than any before it. And two months before the fire started, CalFire had already exhausted $431 million of its $443 million budget fighting earlier devastating fires.

So, beginning in the mid-1980s and accelerating in recent years, Forest Service budget cuts and increasingly prevalent wildfires opened the door for private contractors to assume roles formerly held by government employees. In some cases, that looks like insurance companies sending crews out, à la 18th-century London, or KimYe ordering up some firefighters to tend to their manse.