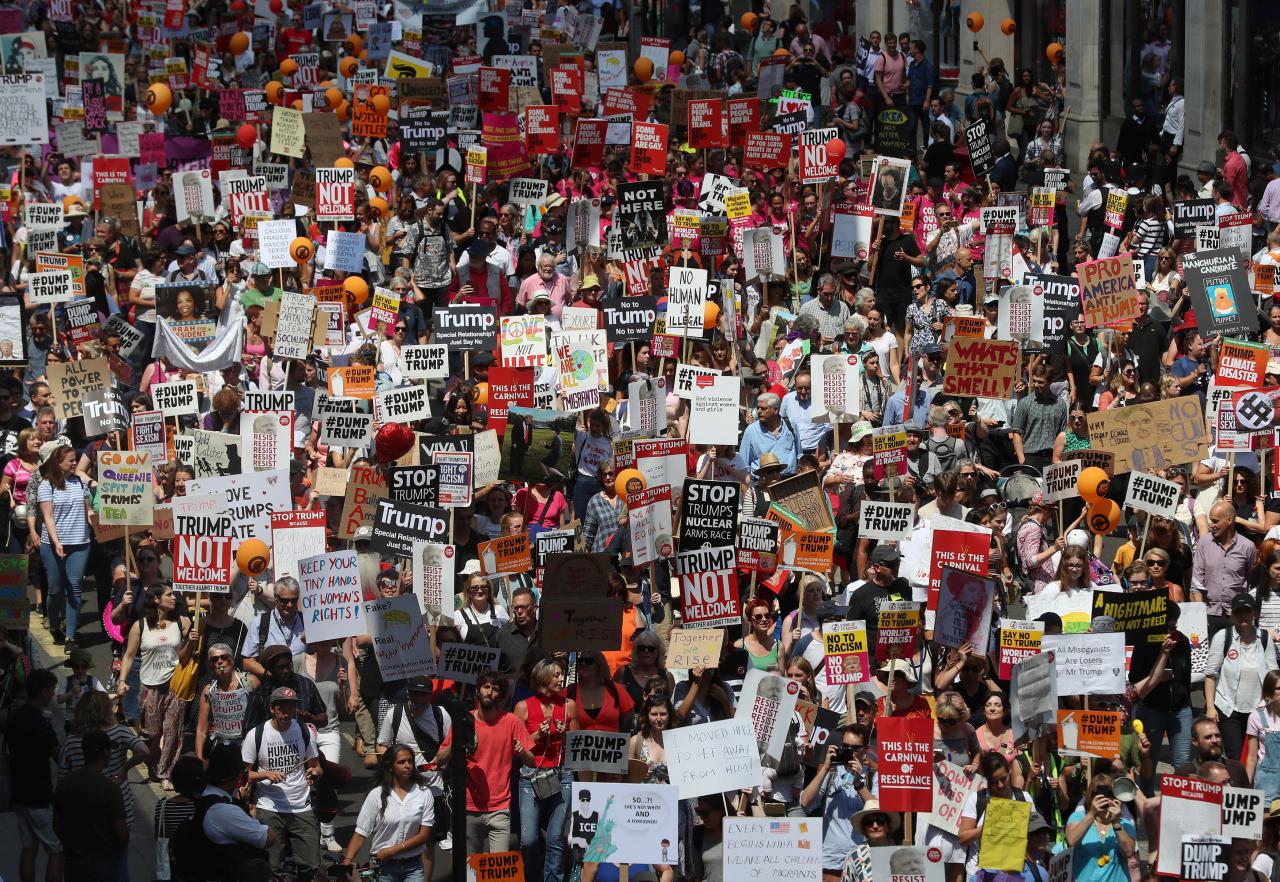 As US President Donald Trump took tea with the Queen in the exalted halls of Windsor Castle Friday, tens of thousands of people thronged the streets of central London, in a huge and colorful demonstration against a visit that aroused deep opposition in the UK.


“Stupid, callous, fragile, racist, narcissistic POTUS,” declared one man’s sign. The play on words from a “Mary Poppins” song was one of the less profane declarations of dissent. Another placard read: “Don’t worry! This protest is just fake news!”
For those who hadn’t prepared their insults at home, piles of placards emblazoned with anti-Trump messages — such as “Dump Trump” and “World’s #1 Racist” — lay banked by Oxford Circus underground station for anyone to pick up.
Others left their wit aside, wearing face masks printed with a simple message: “Trump stinks.”
Police in the city did not give an estimate on the turnout but said they were forced to close off Trafalgar Square, where protesters were headed for an evening rally, as it had nearly reached capacity.
Organizers claimed 250,000 turned out to voice their opposition to Trump, and while there is no way to verify that figure, it was clear that this was one of the biggest demonstrations in London since 1 million people demonstrated against the Iraq war in 2003.
Protesters listed a litany of grievances about the US president, from his attitude toward women, and his hardline policies likes family separations of migrants at the US border and the ban on travel from Muslim-majority countries.
Julia Lalla-Maharaj, a women’s rights activist, marshaled the crowds with a loudspeaker. “Resist!” she cried. “We have had enough. We have got to stand up because now is the time.”
Chants rang out from the waiting crowds. “Say it loud, say it clear, Donald Trump’s not welcome here,” and “Hey ho, hey ho, Donald Trump has got to go.”

‘It’s all so totally offensive’

Despite the vitriolic slogans and chants, the mood was festive, rather than aggressive, as Londoners enjoy a long run of sunshine.
People of different ages and ethnicities, families, mothers with strollers, retirees and wheelchair users all joined the march. Three-and-a-half-year-old Buster Dugdale from London, already on the sixth protest of his young life, danced among the bubbles sprayed by Palestinian protester Bashar Bahlawan, 23, wearing an outsized T-shirt declaring “Choose love.”
Buster’s mother, Beth Evans, supports the “Help Refugees” aid organization and said it was important to show her opposition to Trump’s policies.