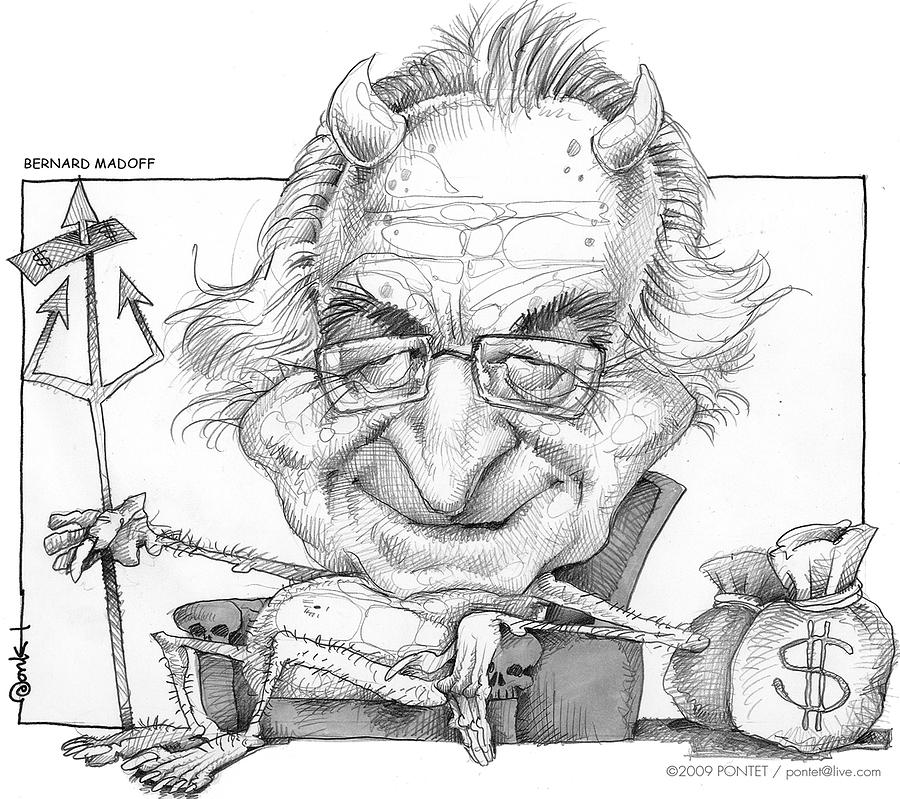 A decade after Bernard Madoff was arrested for running the world’s biggest Ponzi scheme, the bitter fight to recoup investors’ lost billions has astounded experts and victims alike.

While no one will ever collect the phantom profits Madoff pretended he was earning, the cash deposits by his clients have been the primary objective for Irving Picard, a New York lawyer overseeing the liquidation of Madoff’s firm in bankruptcy court. So far he’s recovered $13.3 billion—about 70 percent of approved claims—by suing those who profited from the scheme, knowingly or not. And Picard has billions more in his sights.

“That kind of recovery is extraordinary and atypical,” said Kathy Bazoian Phelps, a bankruptcy lawyer at Diamond McCarthy LLP in Los Angeles who isn’t involved in the case. Recoveries in Ponzi schemes range from 5 percent to 30 percent, and many victims don’t get anything, Phelps said. 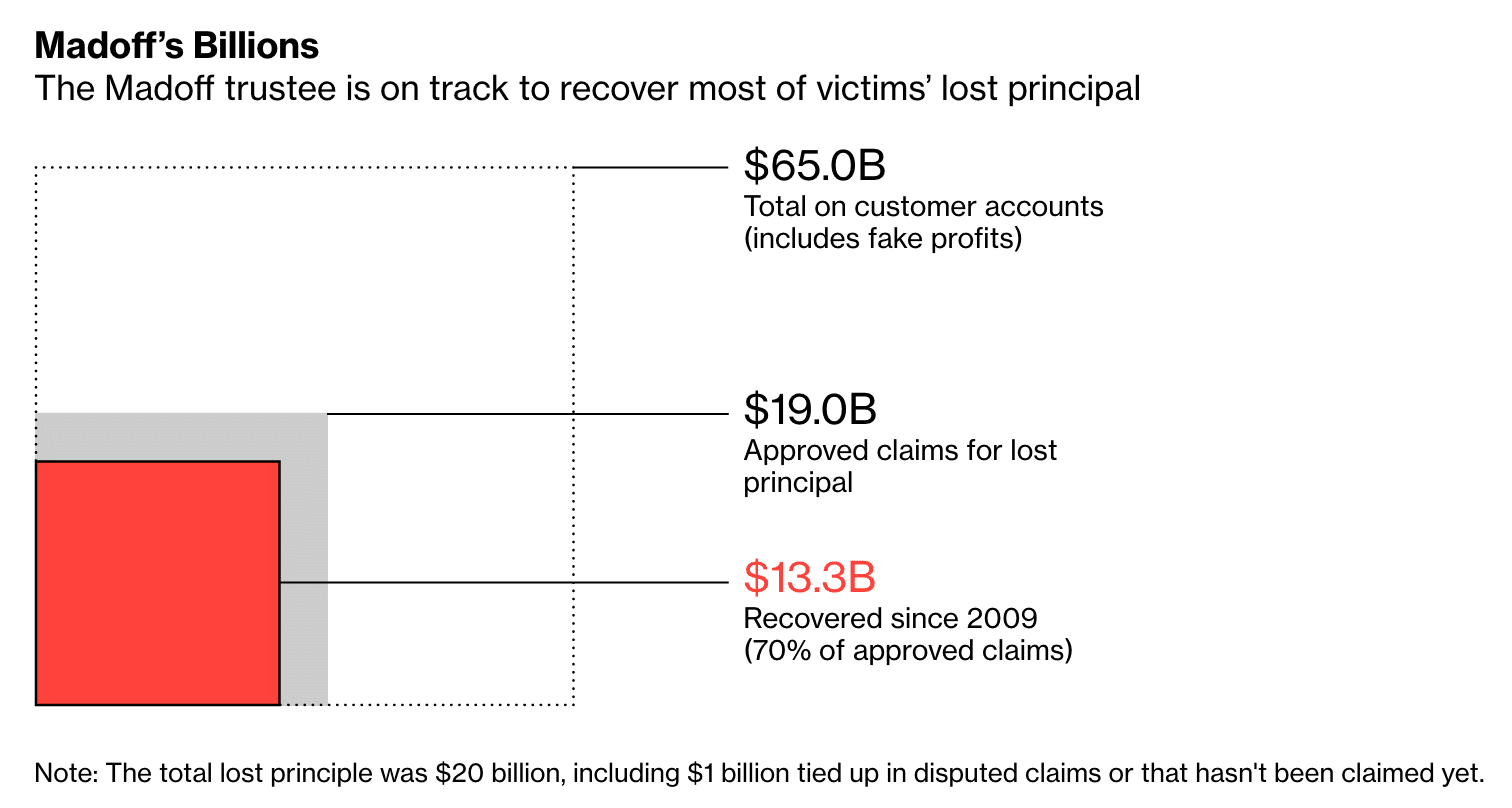 The scam by Madoff wiped out $19 billion that wealthy investors, charities and celebrities had entrusted to him starting as long ago as the 1970s, based on approved claims so far. For years, he doctored client accounts with phony trades and $45 billion in fake profits, until the 2008 financial crisis exposed the fraud and led to the collapse of his investment advisory firm.

When Madoff was arrested on fraud charges Dec. 11, 2008, the collapse of his company affected about 4,800 client accounts and kicked off prolonged legal battles over the scraps. Madoff pleaded guilty and is serving a 150-year prison term, while his five top aides were convicted. His sons, who worked for him, are dead—one hanged himself and the other died of cancer. Madoff’s wife, Ruth, is living in a rented home in Connecticut. The government allowed her to keep $2.5 million after Madoff’s plea.

“This was the biggest, longest-running and one of the more complex frauds of all times, so it’s not surprising that it’s taking a very long time to be dealt with,” said Matthew L. Schwartz, a former federal prosecutor who worked on the massive criminal case sparked by Madoff’s fraud. Picard, appointed as trustee in the case, “has really returned unexpected amounts of money to victims,” Schwartz said.

After the initial chaos following Madoff’s arrest, Picard has focused on a simple formula to recover principal cash for victims: Suing customers who withdrew more money than they put in. The strategy sparked controversy but was ultimately blessed by the courts.

The trustee, from Baker & Hostetler LLP, said the root of his success is the massive forensic accounting effort that began a decade ago in the Manhattan skyscraper where Madoff’s offices spanned three floors and later expanded to a large warehouse full of documents.

“A substantial amount of money” remains to be collected through pending court claims, Picard said in an interview.

The trustee has accepted claims totaling $19 billion—a figure that recently increased from $17.5 billion as a result of various settlement negotiations. So far he’s distributed $11.3 billion out of the $13.3 billion recovered, with the rest being held in reserve pending the outcome of legal disputes and appeals. The trustee is required to keep a reserve of about $200 million. The entire customer fund will eventually be paid to victims.

He periodically distributes the money he raises on a pro rata basis, usually in chunks of several hundred million dollars. Under his process, victims with smaller claims were paid back faster than those with bigger claims. As of now, almost 1,400 victims who had claims of $1.38 million or less have been repaid in full. 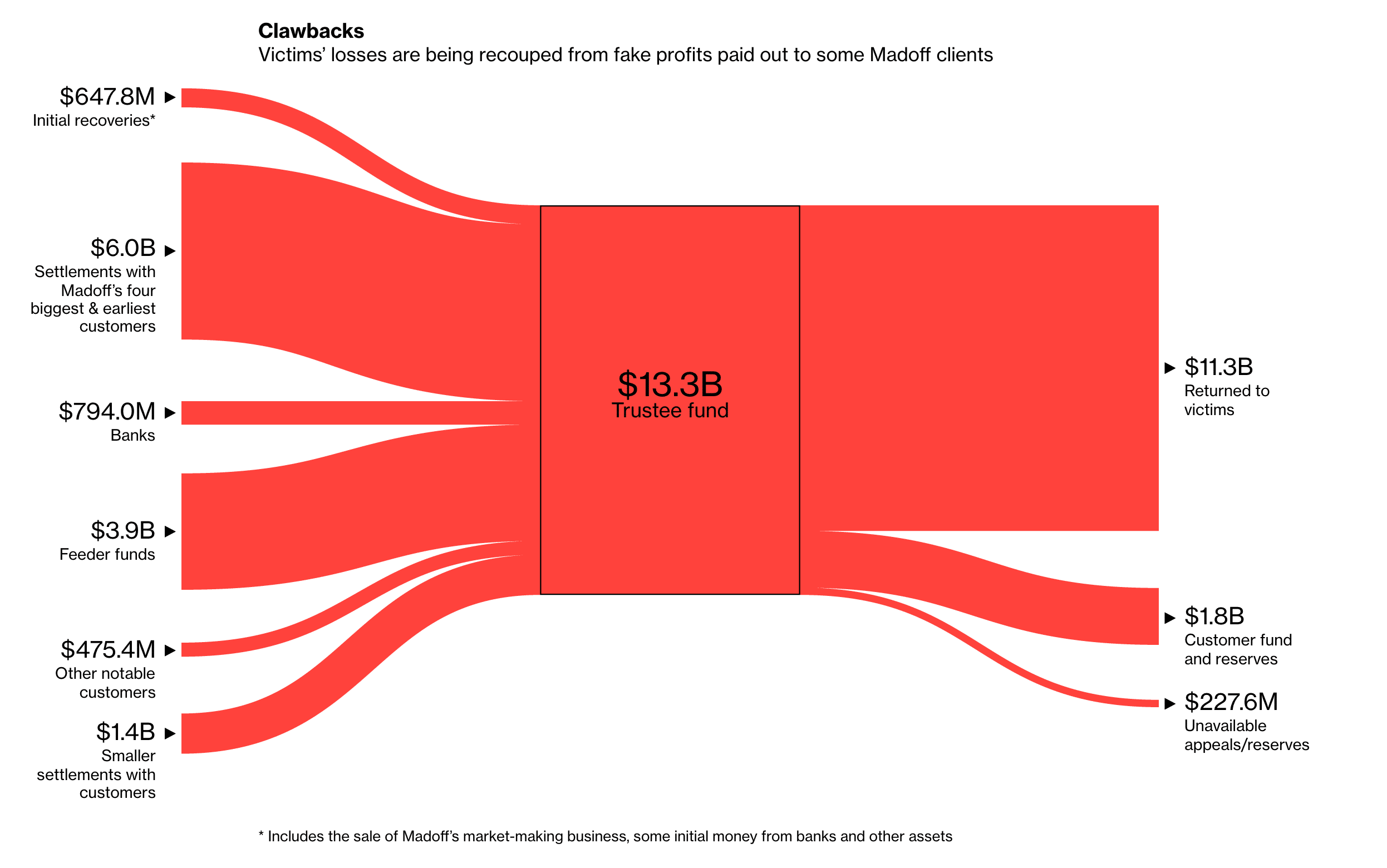 Not all the targets were willing to give in. Picard filed hundreds of lawsuits to “claw back” phony profits from a wide range of customers, including individuals, families, and estates that invested with Madoff for years. The trustee also went after offshore “feeder funds” that collected cash from their own customers and funneled it to Madoff to tap his unusually consistent returns.

Just last month, Picard’s lawyers asked a U.S. appeals court to revive about 80 such lawsuits in which he’s seeking up to $4 billion—perhaps the last big chunk of money available in the case. A lower court threw the suits out two years ago, ruling the money was beyond the trustee’s jurisdiction because it had been transferred from feeder funds to foreign banks before Madoff’s arrest.

“It’s the biggest missing piece of the puzzle,” said Stephen Harbeck, the chief executive officer of Securities Investor Protection Corp., the industry-financed organization that hired Picard and oversees the liquidation in bankruptcy court. Like Picard, Harbeck has been working on the case since it started.

For its work, the trustee’s firm has been paid $1.67 billion over the past decade by SIPC, not from the customer funds. The industry group also provided $639 million in advances—up to $500,000 each—to victims who were waiting for claims to be paid.

If Picard wins the appeal and succeeds in all of those cases—an outcome he called “aspirational”—he’d boost recovery for victims to 91 percent of the lost principal, which could change depending on investor claims accepted or adjusted by the trustee.

Among the customers of the 80 feeder-fund accounts is a company owned by billionaire brothers Charles and David Koch, who started investing with Madoff in the mid-1990s. The Koch firm seeks to keep $21.5 million that had been sent from Madoff’s firm in 2005 to a fund based in the British Virgin Islands, and then to a Koch entity in the U.K.

Investors who weren’t direct Madoff customers—those who invested through feeder funds or money managers—weren’t allowed to file claims with Picard to recover their share of the cash principal. For them, the Department of Justice set up a separate $4 billion fund to compensate for some losses.

One such investor, former Food Network personality Daphne Brogdon, invested with Madoff via the late Beverly Hills money manager Stanley Chais, an old friend of Madoff’s who funneled his clients’ money to the con man for years.

Brogdon said she and her husband finally started getting money back just this year thanks to a $15 million settlement between Chais’s estate and California authorities in 2016.

“We’re very, very grateful and thankful,” said Brogdon, who wants to put her daughter back in private school.

Even so, Brogdon remains bitter.

“I know it’s been 10 years, but it’s still so fresh for me,” said Brogdon, who now dabbles in radio broadcasting and social-media marketing. “Sometimes I get a compliment on an outfit and I say, ‘Yeah, I bought that when I was rich.’ Now I shop at Marshalls.”

By Erik Larson and Christopher Cannon