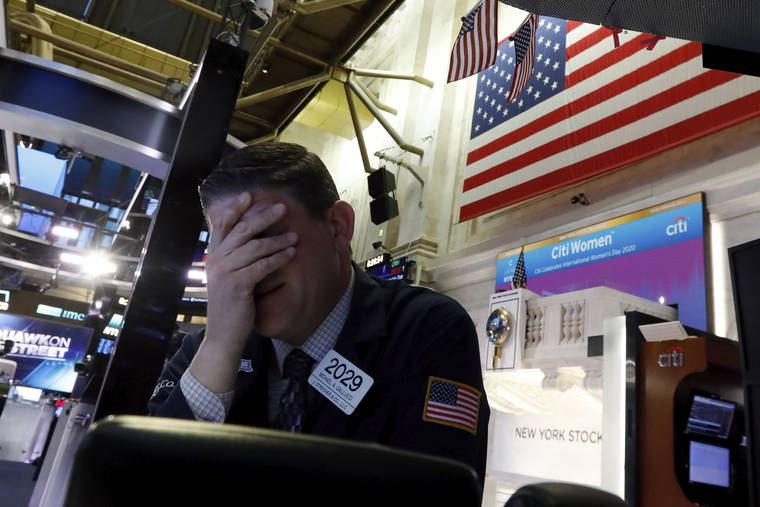 Stocks cratered Monday as investors grappled with the sinking price of oil and the spread of the coronavirus.

The sharp declines followed a roller-coaster week that saw the S&P 500 swing up or down more than 2.5% for four days straight. While Monday’s drop was significant, it still didn’t crack the 20 worst days for the S&P 500.
Investors continued to seek safer assets amid additional fears that the coronavirus will disrupt global supply chains and tip the economy into a recession. The yield on the benchmark 10-year Treasury note dropped below 0.5% for the first time ever, while the 30-year rate breached 1%. At one point early Monday, the 10-year slid to 0.318%.

Saudi Arabia on Saturday slashed official crude selling prices for April, in a sudden U-turn from previous attempts to support the oil market as the coronavirus hammers global demand. The move came after OPEC talks collapsed Friday, prompting some strategists to see oil prices crater to $20 per barrel this year.

“Crude has become a bigger problem for markets than the coronavirus,” Adam Crisafulli, founder of Vital Knowledge, said Sunday. “It will be virtually impossible for the [S&P 500] to sustainably bounce if Brent continues to crater,” he added.

Bank stocks were smashed as lower yields put pressure on their margins, while an oil crash could cause energy companies to default on their obligations. JPMorgan plunged more than 9%.

President Donald Trump blamed the media and the oil price war for the stock rout on Monday, arguing in a series of tweets that lower gasoline prices are “good for the consumer.”

Donald J. Trump
✔@realDonaldTrump
Saudi Arabia and Russia are arguing over the price and flow of oil. That, and the Fake News, is the reason for the market drop!

Investors have already been on edge about the coronavirus outbreak that caused major stock averages to tumble into correction territory. As of Monday, global cases of the infection have climbed to more than 111,000 with at least 3,800 deaths around the world. The situation is also worsening in the U.S. with New York, California and Oregon all declaring states of emergency.

“The idea that lower gasoline prices is going to put more cash in workers’ pockets and give consumer spending and the economy a boost doesn’t seem to cushion the blow for stock market investors,” Chris Rupkey, MUFG Union Bank’s chief financial economist, said in a note. “They want out. Big time. The sky is falling. Get out, get out while you can. Wall Street’s woes have to eventually hit Main Street’s economy hard.”

Gold, another safe-haven asset, crossed $1,700 an ounce, hitting its highest level since December 2012. Copper prices hit a more than three-year low of $2.46. Copper is seen as a barometer of broad economic demand given its applications in electrical equipment and manufacturing.

The Federal Reserve announced an emergency rate cut last week to combat the economic impact from the virus, its first such move since the financial crisis. President Donald Trump on Friday signed a sweeping spending bill of an $8.3 billion package to aid medical research.

The New York Fed said Monday it will increase the amount of money it is offering to banks for their short-term funding needs. To make sure the funding, or repo, markets are working properly, the central bank said it will up the amount it offers in overnight operations from $100 billion to $150 billion through Thursday.

Traders expect the central bank to slash rates by three-quarters of a percentage point at its March meeting next week. Chances for a full percentage point cut this month were at 29.2%, according to the CME FedWatch tracker.

The iShares High Yield Corporate Bond ETF (HYG) fell 4.5%, on concerns that a oil price crash will cause many small energy companies to default, hitting the high-yield credit market that they’ve become so a large part of.

Subscribe to CNBC PRO for exclusive insights and analysis, and live business day programming from around the world.