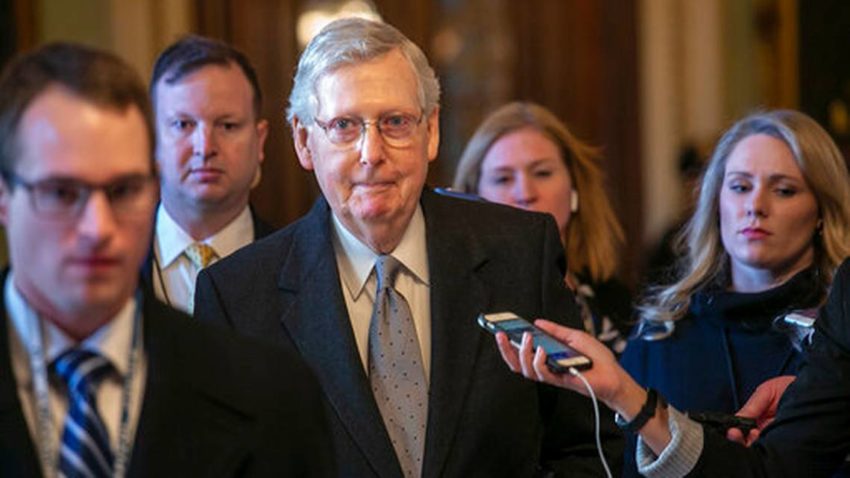 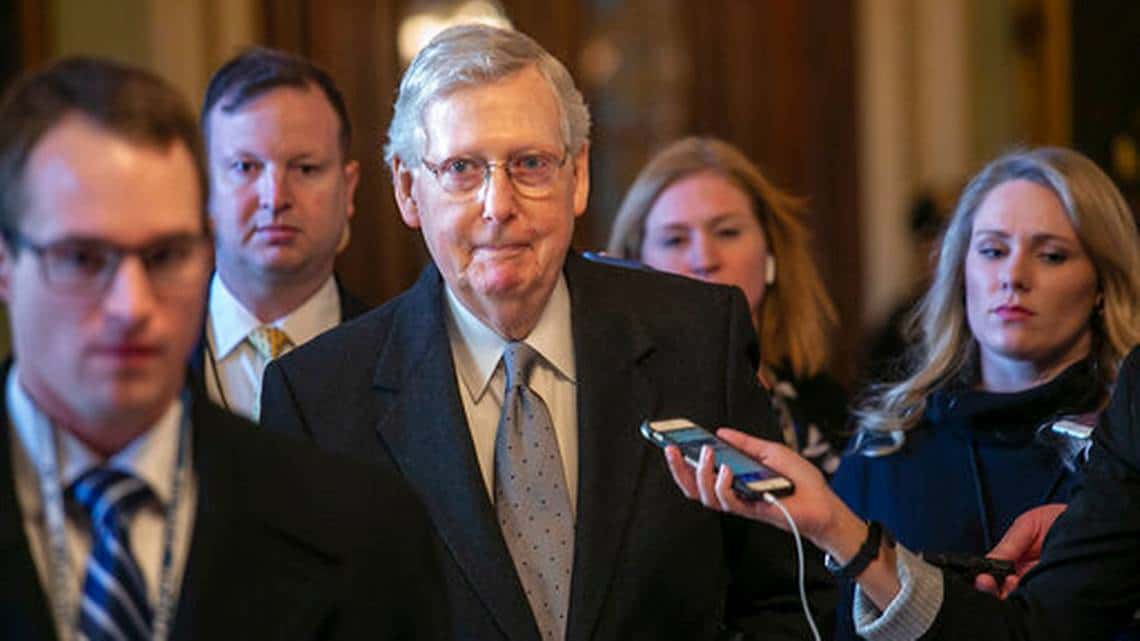 Now Mitch McConnell has joined the game and suddenly, things have changed. The Senate majority leader, who until late last week had been virtually invisible during negotiations to re-open the government, announced Tuesday the Senate will vote Thursday on President Trump’s pitch to fund his border wall and end the partial shutdown. And under the Senate rules, if it does not pass, there will be a separate vote on a Democratic-backed package to open up the government immediately — but not give Trump the money for his wall.
The votes will be the first time the Senate has voted on spending measures this year, though neither measure may clear the 60 votes necessary to limit debate and ultimately head for passage.

Republicans largely support giving Trump some money for a border wall and Democrats are opposed. But the flurry of activity serves to underscore the frustration lawmakers are feeling as the longest shutdown in U.S. history drags into Day 33 Wednesday. McConnell, who has been a key and often decisive negotiator in prior government impasses, had insisted a fix had to be negotiated between House Speaker Nancy Pelosi and Trump.

Senate Majority Leader Mitch McConnell blocked an attempt by Democrats to force a vote on legislation to reopen the federal government on January 10, 2019. Democratic Minority Leader Chuck Schumer said the bills were uncontroversial. But with polls suggesting many voters were blaming Trump for the shutdown that has resulted in federal workers working without paychecks, the president on Saturday offered a deal to resolve the impasse. Democrats rejected it before he spoke.

The Thursday votes, at least, will give everyone clues as to what senators are willing to buck their parties. Should a handful of Republicans back the Democratic plan, for instance, the vote would suggest a few more Republicans could side with Democrats in exchange for concessions.

The votes also give each party new talking points in a different way — if both proposals fail, each can argue the opposition is blocking a good faith effort.

McConnell embraced Trump’s Saturday bid to end the government shutdown as “bold.” The Kentucky Republican tried on the Senate floor Tuesday to paint the proposal as one that included elements Democrats have sought — including protection for young immigrants brought to the country illegally by their parents. By rejecting it, he charged, Democrats would be siding with the far left of their party.

“Is their plan truly to throw federal workers, (Deferred Action for Childhood Arrivals) DACA recipients, Customs and Border Patrol, and indeed all Americans under the bus just to extend this run of political theater?” McConnell asked. “So they can look like champions of the so-called ‘Resistance’?”

McConnell, who met late last week at the Capitol with Vice President Mike Pence to discuss strategy, said the GOP package would include Trump’s request for $5.7 billion for his campaign pledge of a wall at the southern border with Mexico, along with enhanced surveillance technology and funding to recruit and train 750 new Border Patrol agents.

Democrats said the temporary provisions for young immigrants would barely restore the protections that Trump had taken away.

House and Senate Democrats have presented unusually unified opposition to Republican efforts to pay for the wall, but McConnell sought to highlight potential divisions within the party. He pointed to recent remarks from Democrats who have said they are not necessarily opposed to a wall.

“One Democrat from the state of Washington admitted, quote, ‘The wall is not in itself a bad idea… it’s been done.,’ “ McConnell said, citing, though not by name, Rep. Adam Smith, D-Washington.

On an ABC’s “This Week” appearance earlier this month when he explained prior Democratic votes for border barriers, Smith said he wasn’t opposed but that Trump “has not made the case that on the portions of the border where a wall has not been built, how is a wall going to actually enhance border security?”

McConnell, who has blocked House bills this year to re-open the government, had insisted that he would only move legislation if Trump and Democrats reached an agreement.

His decision to take up the Trump-backed bill that Democrats have already rejected spurred Senate Minority Leader Chuck Schumer, D-New York, Tuesday to dub McConnell a “co-conspirator in the shutdown.”

The two appeared later on the Senate floor to announce the vote schedule that will include both pieces of legislation.