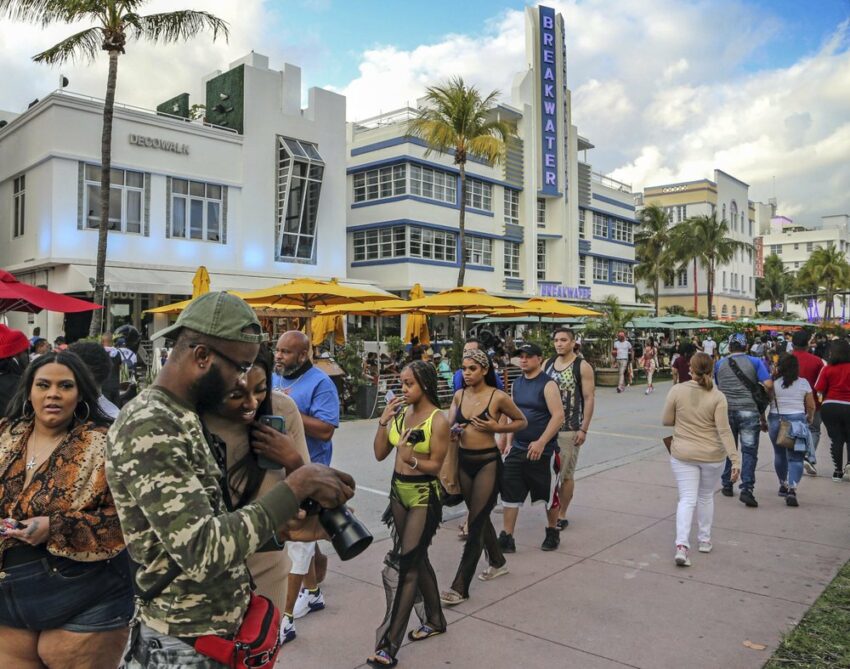 Pointing to over 1,000 arrests in one of the nation’s top party spots, Miami Beach officials warned Sunday that the unruly spring break crowd gathering by the thousands, fighting in the streets, destroying restaurant property and refusing to wear masks has become a serious threat to public safety.

During a last-minute meeting Sunday, city officials voted to extend a highly unusual 8 p.m. curfew for another week along famed South Beach, with the possibility of extending it well into April if needed, and stressed this isn’t the typical spring break crowd. They said it’s not college students, but adults looking to let loose in one of the few states fully open during the pandemic.

Law enforcement officers from at least four other agencies, along with SWAT teams, were added to help contain the raucous crowds, but it wasn’t enough. After days of partying, including several confrontations with police, Miami Beach officials enacted a highly unorthodox curfew Saturday from 8 p.m. until 6 a.m., forcing restaurants to stop outdoor seating entirely during the three-day emergency period, and encouraging local businesses to voluntarily shut down.

More than half of the more than 1,000 arrests were from out of state, said City Manager Raul Aguila, adding many are coming “to engage in lawlessness and an anything goes party attitude.” He also noted that the crowds weren’t eating at restaurants or patronizing businesses generating badly needed tourism dollars, but merely congregating by the thousands in the street.

Officers in bullet proof vests dispersed pepper spray balls Saturday night into a defiant, but mostly non-violent crowd, refusing to submit to the curfew that had only been enacted four hours earlier. Some people responded by jumping on top of cars, twerking and throwing money into the air.

A military style vehicle was seen rolling down the palm-tree lined Ocean Drive as outnumbered Miami Beach police officers struggled to disperse the raucous crowds Saturday. Tourists were urged to stay inside their hotels and pedestrians or vehicles were not allowed to enter the restricted area after 8 p.m.

Miami Beach Police Chief Richard Clements initially became concerned Monday when the crowds seemed larger than normal on what is typically a quieter day. A group of vehicles blocked the street “and basically had an impromptu street party,” he said. By Thursday, the crowds were growing, fights were breaking out, setting off dangerous stampedes of people fleeing for safety.

“We couldn’t go on any longer,” Chief Clements said during Sunday’s meeting, defending the city’s curfew. “I think this was the right decision,”

By Friday night, police said the partying was out of control. One restaurant was “turned upside down” in the melee, “chairs were used as weapons,” and broken glass covered the floor.

Next door, the iconic bar, the Clevelander South Beach, announced it was temporarily suspending all food and beverage operations until at least March 24 after crowds crammed Ocean Drive, breaking out into street fights.

After gunshots were fired, a young woman cut her leg so badly in a stampede that she was transported to the hospital where they initially thought she had been shot, police said.

“How many more things are we going to allow to occur before we step in,” said Chief Clements.

“When hundreds of people are running through the streets panicked, you realize that’s not something that a police force can control,” he said during a commission meeting Sunday.

Local officials have struggled to enforce COVID ordinances. Florida has no statewide mask rules, limits on capacity or other such restrictions, courtesy of Republican Gov. Ron DeSantis’ pro-business stance.

One commissioner asked whether a toll could be levied on non-residents to discourage visitors. Several said it was time for a new marketing campaign to help rebrand South Beach’s as a party city, pointing to the small handful of arrests in nearby Fort Lauderdale over spring break.

Local officials and businesses have struggled to balance courting tourists to boost the economy while doing so safely amid the ongoing coronavirus pandemic. Local residents complained they spent three to four hours in traffic after bridges were closed during the curfew and some restaurants asked for permission to continue food delivery after the curfew.

At the same time, local officials banned alcohol from the beach, along with all alcohol sales after 10 p.m. in an effort to curb partying. The city even sent cellphone text messages to tourists warning, “Vacation Responsibly or Be Arrested.”

“I just feel like it’s really not fair,” tourist Heather Price told NBC 6. “People paid a lot of money to come all the way out here, just to not be able to do the activities they wanted to.”