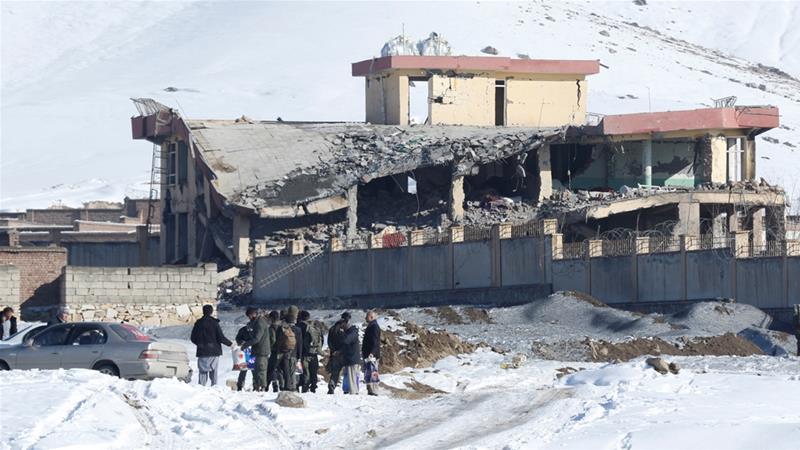 More than 100 members of Afghan security forces were killed when armed Taliban fighters attacked a military base and police training center outside Kabul on Monday, a senior defense ministry official has said.

“We have information that 126 people have been killed in the explosion inside the military training center,” the official, speaking on condition of anonymity, told the Reuters news agency about the attack in Maidan Shahr, the capital of Wardak province.

Maidan Shahr is about 44km southwest of Kabul, along the Ghazni-Kabul highway.

A provincial official also told Reuters that the death toll was over 100.

A government spokesman declined to comment. Earlier, the government had said 12 people were killed.

Some of the wounded were in provincial hospitals, while the more serious cases were being treated in Kabul, said Salem Asgherkhail, head of the area’s public health department.

The Taliban claimed responsibility for the coordinated attack, carried out using a car bomb that detonated at the gate of the base in Maidan Shahr, according to Nasrat Rahimi, the deputy spokesman for the Interior Ministry.

Armed Taliban fighters then moved in, a tactic the group has used in many previous attacks.

The attack comes a day after a Taliban assault in the neighboring Logar province killed eight security forces.

The Taliban has been on the offensive in recent months, attacking targets around the country in an apparent effort to expand their influence and perhaps to gain more leverage in any future peace talks.

According to data from the US Special Inspector General for Afghanistan Reconstruction (SIGAR), the Taliban controls or contests nearly half of Afghanistan.

Since July, the US has tried to restart a peace process with the Taliban. US officials have met Taliban representatives in a number of countries. The Taliban has refused to meet Afghan government officials, calling them “puppets”.

US Senator Lindsey Graham said in Pakistan on Sunday President Donald Trump should meet Pakistani Prime Minister Imran Khan as soon as possible to reset long-difficult US relations and push for a peaceful settlement in Afghanistan.

US relations with Pakistan have been strained by suspicions that elements in the Pakistani establishment were aiding the Taliban, a charge Islamabad strongly denies. However, relations have appeared to improve in recent months amid efforts to push the armed group towards a peace deal.