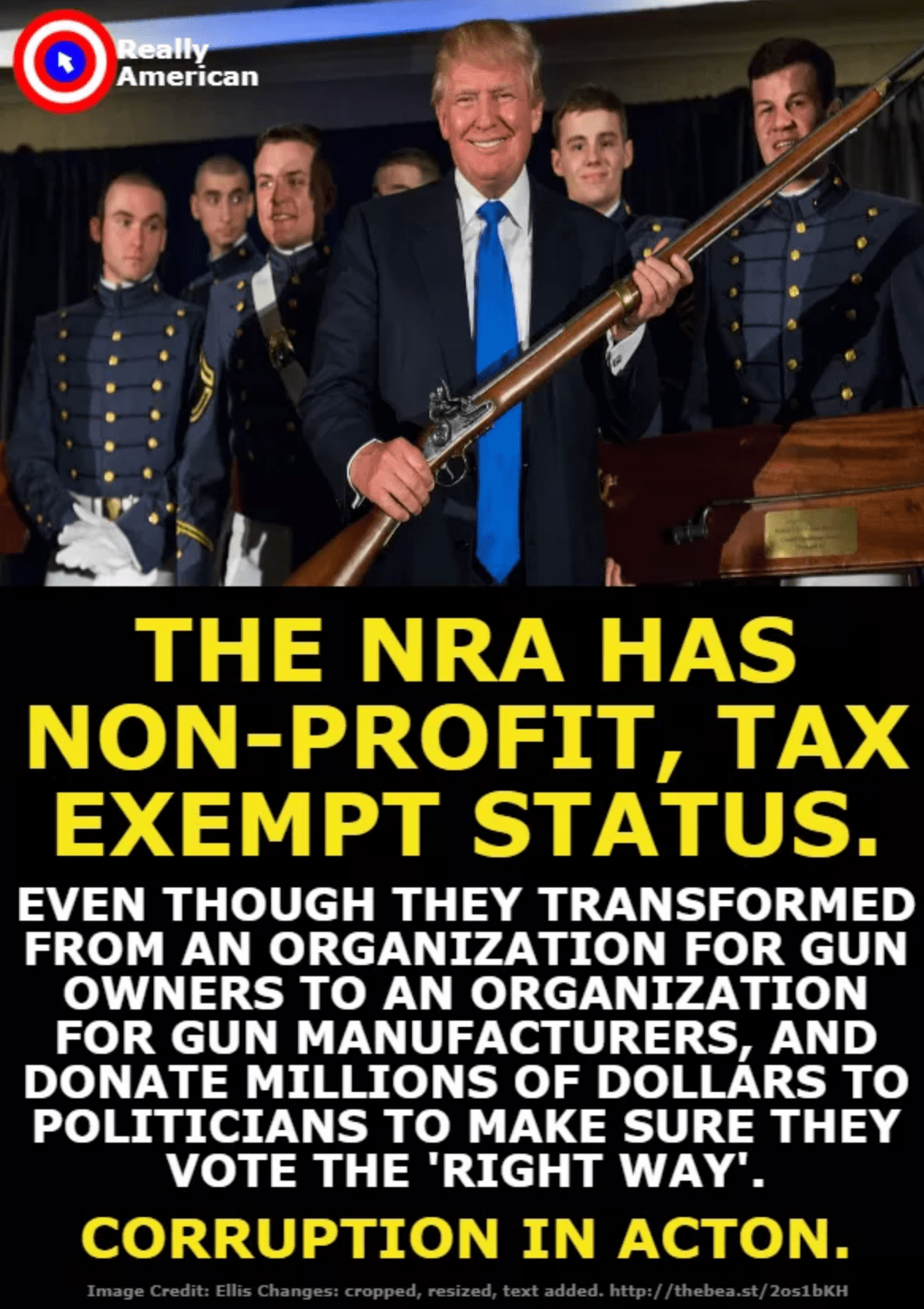 A Facebook meme gets the basic facts right about the gun lobby’s status as a social welfare organization.

The NRA is a tax-exempt nonprofit organization.

The February 2018 shooting deaths of seventeen people at a high school in Parkland, Florida and a subsequent, charged town hall meeting about gun safety with some of the mass shooting’s survivors and their families have put the National Rifle Association under intense scrutiny for its opposition to gun control.

Against this background, many were surprised to discover that the NRA, despite being well known for its political lobbying and ties to the gun industry, is, in fact, a tax-exempt nonprofit organization. On 22 February 2018, the “Real American” Facebook page posted a meme that showed President Donald Trump holding a rifle, along with this message:

The National Rifle Association is indeed a tax-exempt nonprofit organization. To be specific, it has 501(c)(4) status, meaning it is regarded as a “social welfare organization” by the Internal Revenue Service:

To be operated exclusively to promote social welfare, an organization must operate primarily to further the common good and general welfare of the people of the community (such as by bringing about civic betterment and social improvements.)

A 501(c)(4) organization like the NRA is allowed to engage in political lobbying and advocacy, but this cannot be its main activity, and it must be related to the group’s primary mission and the issue upon which its tax exemption is based, according to the IRS. Social welfare organizations may also get involved in political campaigns and elections, provided their involvement is related to the group’s mission, and again, only if this does not constitute their primary activity.

Critics of the NRA have claimed that the organization’s tax exemption should be taken away, because, roughly speaking, the NRA spends less time and money providing a genuine service to the public at large than it does on political lobbying, and because the NRA’s activities benefit the private gun industry.

In its 2015 tax return, the NRA described its mission as “Firearms safety education and training and advocacy on behalf of safe and responsible gun owners.”  In April 2016, the Coalition to Stop Gun Violence published a report on this very issue, labelling the NRA “a tax-exempt [organization] loaded with private interest.” The authors — attorneys Alexandra O’Neill and Daniel O’Neill — wrote:

…The majority of the NRA’s lobbying, education, training and publication activities operate to benefit a private interest: the firearms and ammunition industry.  As a result, under the cases and rulings interpreting section 501(c)(4), the NRA does not primarily serve the community interest and should not qualify as a tax-exempt social welfare organization.

Instead, the NRA should operate as a political lobbying organization to be accountable for its key interests: the firearms and ammunition industry.

A spokesperson for the NRA rejected this, telling us in an e-mail that the group’s legislative lobbying was “textbook social welfare activity,” and that any benefits that accrued to gun manufacturers from the NRA’s activities were “incidental”:

The assertion that the NRA is not operated for tax-exempt purposes is false because legislative lobbying to protect the Second Amendment freedoms of Americans is social welfare activity. The defense of civil rights secured by law is textbook social welfare activity, regardless of the size and extent of such activity….

It was established in case law, the spokesperson argued, that “occasional” private financial benefits resulting incidentally from a nonprofit group’s activities are allowed: