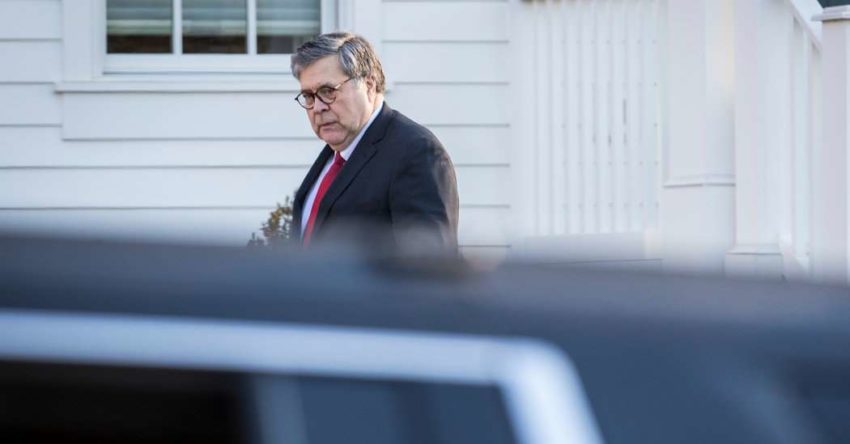 WASHINGTON — The still-secret report on Russian interference in the 2016 election submitted by the special counsel, Robert S. Mueller III, last week was more than 300 pages long, according to the Justice Department, a length that raises new questions about Attorney General William P. Barr’s four-page summary.

Mr. Barr wrote to Congress on Sunday offering what he called the “principal conclusions”of the report — including that Mr. Mueller had not found that the Trump campaign had taken part in a conspiracy to undermine the election. But he had notably declined to publicly disclose its length.

The total of 300-plus pages suggests that Mr. Mueller went well beyond the kind of bare-bones summary required by the Justice Department regulation governing his appointment and detailed his conclusions at length. And it raises questions about what Mr. Barr might have left out of the four dense pages he sent Congress.

Democrats, who like all other lawmakers have not seen the report, have all but accused Mr. Barr of covering up damaging information it contains. They have specifically focused on an apparent difference between the views of Mr. Barr and Mr. Mueller on whether Mr. Trump obstructed justice. Democrats have demanded that the attorney general make the full report and evidence public.

The new ballpark page length came about a week after a senior Justice Department official told reporters that the report was “comprehensive.”

Representative Jerrold Nadler of New York, chairman of the Judiciary Committee, added the description “very substantial” after talking to Mr. Barr on Wednesday, although neither he nor any other member of Congress has seen it and he declined to give a page count. Andrew Napolitano, a legal analyst for Fox News and a favorite of Mr. Trump, caused a stir on Wednesday when he said multiple times on the air that the report was 700 pages.

Fox’s Judge Napolitano: ‘There Is Something There’ on Conspiracy in Mueller Report

‘There is something there, but it is not enough to prove guilt beyond a reasonable doubt,’ the Fox News senior judicial analyst said Wednesday.

thedailybeast.com 177 people are talking about this

Kerri Kupec, a Justice Department spokeswoman, confirmed on Thursday an earlier report by The New York Times on the page count. She said that Mr. Barr had told Mr. Nadler on their Wednesday call that the report was more than 300 pages long.

The Times story originally cited American officials, who spoke anonymously because they were not authorized to discuss details of the report, titled “Report on the Investigation into Russian Interference in the 2016 Presidential Elect Graham: Congress could get Mueller report by April

Other blockbuster government reports in recent decades have been lengthy. At 445 pages, the independent counsel Kenneth W. Starr’s report on President Bill Clinton had to be trucked to Capitol Hill in September 1998.

The 9/11 commission report ran 567 pages with notes on the circumstances and fallout of the September 11, 2001, terrorist attacks.

Even the Justice Department inspector general seems to have outwritten Mr. Mueller of late. Michael E. Horowitz released a scathing 500-page report last summer on the F.B.I.’s handling of an investigation into Hillary Clinton’s use of a private email server as secretary of state that preoccupied Congress for weeks.

By contrast, the Watergate “road map” sent to Congress by the grand jury investigating President Richard Nixon and his associates was only 62 pages. Sent to lawmakers in 1974, the court report was not unsealed by a federal judge and made public until last year.

Mr. Mueller probably collected and generated hundreds of thousands if not millions of pages of paper in his investigation. Congress has made clear it would eventually like access to all of them, but the Justice Department could have good reason to block some of their release, leaving it once again to the courts to determine who sees what.

Members of Mr. Barr and Mr. Mueller’s teams are currently reviewing the full report to redact information that they do not believe should be made public for intelligence or other reasons. Mr. Barr has told lawmakers in recent days that it will take weeks to make more of Mr. Mueller’s findings.