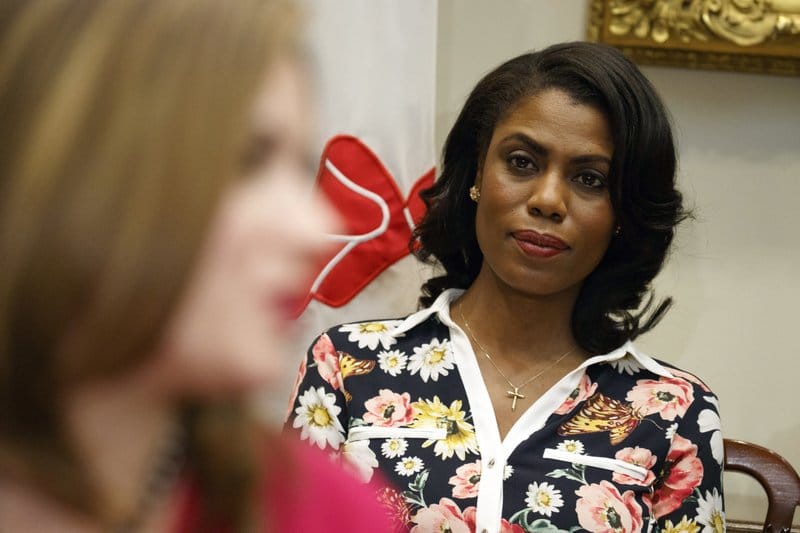 WASHINGTON (AP) — President Donald Trump lashed out at Omarosa Manigault Newman on Monday, saying his former White House adviser — who is promoting a tell-all book and airing secret audio recordings —“got fired for the last time.”

On Twitter, Trump labeled Manigault Newman “wacky” and said Chief of Staff John Kelly called her a “loser & nothing but problems.” He added: “I told him to try working it out, if possible, because she only said GREAT things about me – until she got fired!”

Trump’s pushback came after Manigault Newman released another recording Monday. Aired on NBC’s “Today” show, it is purportedly an excerpt of a phone conversation between Trump and her after she was fired from the White House. It appears to show Trump expressing surprise, saying “nobody even told me about it.”

On Sunday, Manigault Newman told NBC’s “Meet the Press” that she surreptitiously recorded a number of conversations in the White House for her own protection. The show aired portions of a recording of her firing by Kelly in the high-security Situation Room.

Critics have denounced the recordings as a serious breach of ethics and security. The voice on the recording released Monday appears to be Trump’s. The White House has not denied it, but The Associated Press has not independently verified it is the president. The AP has independently listened to the recording of Kelly and Manigault Newman.

Trump acknowledged Monday that the president of the United States should perhaps not engage in a public war of words with an ex-employee, saying he knows “it’s “not presidential” to take on “a lowlife like Omarosa.” But he added: “This is a modern day form of communication and I know the Fake News Media will be working overtime to make even Wacky Omarosa look legitimate as possible. Sorry!”

Responding to Trump’s tweets on NBC, Omarosa said: “I think it’s sad that with all the things that are going on in the country that he would take time out to insult me and to insult my intelligence.”

She added: “This is his pattern with African-Americans.”

While the latest recording has Trump indicating he was unaware of her firing, Manigault Newman said on “Today” that he may have instructed Kelly to do it. She offered no evidence.

White House spokesman Hogan Gidley said Monday: “I’m not going to get into the tick-tock of who knew what when, but the president makes the decisions.”

Manigault Newman, whose book is out this week, suggested there was more to come: “There’s a lot of very corrupt things happening in the White House, and I am going to blow the whistle on a lot of them.”

Trump’s attorney, Rudy Giuliani, said on “Fox and Friends” Monday that Manigault Newman may have broken the law by recording private conversations inside the White House.

“She’s certainly violating national security regulations, which I think have the force of law,” Giuliani said.

In the recording with Kelly, which Manigault Newman quotes extensively in her new book, “Unhinged,” Kelly can be heard saying that he wants to talk with her about leaving the White House.

“It’s come to my attention over the last few months that there’s been some pretty, in my opinion, significant integrity issues related to you,” Kelly is heard saying, citing her use of government vehicles and “money issues and other things” that he compares to offenses that could lead to a court-martial in the military.

“If we make this a friendly departure … you can look at your time here in the White House as a year of service to the nation and then you can go on without any type of difficulty in the future relative to your reputation,” he tells Manigault Newman, adding: “There are some serious legal issues that have been violated and you’re open to some legal action that we hope, we think, we can control.”

Manigault Newman said she viewed the conversation as a “threat” and defended her decision to covertly record it and other White House conversations.

“If I didn’t have these recordings, no one in America would believe me,” she said.

The response from the White House was stinging.

“The very idea a staff member would sneak a recording device into the White House Situation Room, shows a blatant disregard for our national security – and then to brag about it on national television further proves the lack of character and integrity of this disgruntled former White House employee,” press secretary Sarah Huckabee Sanders said in a statement.

The Situation Room is a sensitive compartmented information facility, or SCIF, where the nation’s most consequential foreign policy decisions are made, and staff are not permitted to bring in cellphones or other recording devices.

“I’ve never heard of a more serious breach of protocol,” said Ned Price, who served as spokesman of the National Security Council in the Obama administration. “Not only is it not typical, something like this is unprecedented.”

Price said there is no one checking staffers for devices at the door, but there is a sign making clear that electronic devices are prohibited.

“The Situation Room is the inner-most sanctum of a secure campus,” he said, describing the breach as part of a culture of disregarding security protocols in the Trump White House. He also questioned why Kelly would ever choose to have such a meeting there.

In the book, being released Tuesday, Manigault Newman paints a damning picture of Trump, including claiming without evidence that tapes exist of him using the N-word as he filmed his “The Apprentice” reality series, on which she co-starred.

Manigault Newman wrote in the book that she had not personally heard the recording. But she told Chuck Todd on Sunday that she later was able to hear a recording of Trump.

“I heard his voice as clear as you and I are sitting here,” she said on the show.

White House counselor Kellyanne Conway told ABC’s “This Week” on Sunday that “the first time I ever heard Omarosa suggest those awful things about this president are in this book.”

Manigault Newman had been a staunch defender of the president for years, including pushing back, as the highest-profile African-American in the White House, on accusations that he was racist.

She now says she was “used” by Trump, calling him a “con” who “has been masquerading as someone who is actually open to engaging with diverse communities” and is “truly a racist.”

“I was complicit with this White House deceiving this nation,” she said. “I had a blind spot where it came to Donald Trump.”