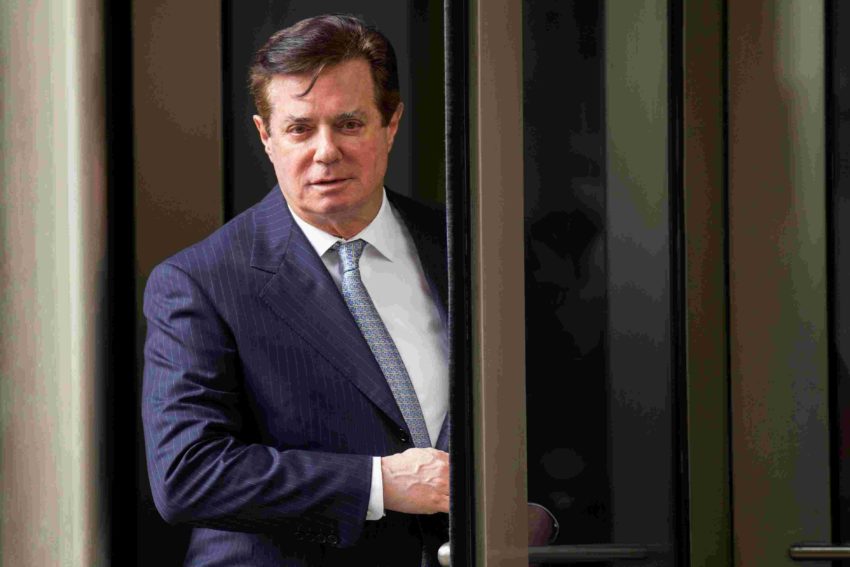 It’s the longest sentence by far for anyone ensnared in Mueller’s nearly two-year-old probe. Manafort’s punishment reached its final length after U.S. District Court Judge Amy Berman Jackson on Wednesday gave Manafort an additional 43 months in prison for a series of lobbying and witness tampering crimes he pleaded guilty to last fall. Manafort also must serve nearly four years for his conviction in a jury trial for financial fraud crimes in Virginia.

Manafort, wearing a dark suit and seated in a wheelchair, issued a full-throated and blunt apology shortly before Jackson handed out his second — and final — prison sentence in the Mueller case.

“I am sorry for what I have done and for all the activities that have gotten us here today,” said Manafort, contrite and stone-faced.

But Jackson swiftly upbraided Manafort’s penitence, insinuating that it was insincere and hinting that she believed Manafort had previously calibrated his statements to appeal to President Donald Trump for a pardon — the only way out of a multi-year prison sentence at this point for the ex-Trump aide, who turns 70 next month.

“Saying I’m sorry I got caught is not an inspiring plea for leniency,” Jackson said, exhaustively recounting Manafort’s deception and propensity for hiding money in offshore accounts, ducking millions in U.S. taxes, tampering with witnesses and repeatedly failing to come clean when confronted with his behavior.

“Why?” she asked. “Not to support a family but to sustain a lifestyle at the most opulent and extravagant level,” she said, a reference to the high-end suits, designer clothes, custom rugs and luxury cars that Manafort collected over the years. “More houses than one man can enjoy, more suits than one man can wear.”

Manafort tried to counteract that narrative on Wednesday, directly addressing for the first time chatter that he had refused to issue a true mea culpa for his crimes during his sentencing last week in Virginia, leading some to suspect he was appealing to Trump for a pardon.

“Let me be very clear,” Manafort said. “I accept the responsibility for the acts that have caused me to be here today.”

Manafort described a “new self-awareness” — achieved during his incarceration through reflection and prayer — that has led him to feel “shame” and “embarrassment” for the “suffering” he has caused.

He added: “The person who I have been described as in public and in this courtroom is not someone that I recognize.”

Manafort made his plea to Jackson about charges brought in the D.C. court, which centered on his lobbying work in Ukraine and conspiring with a suspected Moscow-linked business associate to tamper with potential witnesses. But his shorter-than-anticipated Virginia sentence was hanging over the entire court proceedings.

Jackson stressed that she was not there for a “review or revision” of the Virginia sentence, which drew condemnation from some in the legal community who felt the punishment was unfairly brief, given the scope of the crimes and sentencing guidelines that called for Manafort to receive between about 19 and 24 years.

As a result, one major question facing Jackson, an Obama appointee, was whether she would make Manafort serve his D.C. sentence after he completes the punishment from his Virginia case, or whether she would allow him to serve them both concurrently. Manafort has been using a cane and wheelchair in his recent court appearances and has asked for leniency by citing his deteriorating health, as well as the strains of solitary confinement at the Alexandria, Va., detention center.

Ultimately, Jackson split her decision, making some of her sentence — 30 months — concurrent with the Virginia punishment, but ordering that the rest be served consecutively. Manafort’s nine months already spent in jail since his bond was revoked last June for witness tampering will count toward his time served, meaning Manafort is on track to be released from federal custody around the end of 2025.

Overall, Jackson showed little compassion for Manafort’s situation as she spoke before sentencing him. She repeatedly chided the defendant for dissembling and obfuscating the truth.

“This defendant is not public enemy No. 1, but he’s not a victim either,” she said, kicking off her final remarks where she ticked through his crimes, one by one.

Jackson was most animated while discussing her conclusion that Manafort had repeatedly lied to investigators, a grand jury and even his own defense team throughout his legal fight.

As part of his plea deal in the D.C. case, Manafort agreed to cooperate with Mueller’s team. But Jackson later axed that deal after prosecutors accused Manafort of being evasive, untruthful and unhelpful, actions they said were designed to protect himself and those around him from further legal trouble.

“It’s all very problematic to me because court is one of those places where facts still matter,” she said, a putative reference to the political climate of 2019.

Manafort’s sentencing marks the end to legal proceedings for the only Mueller defendant, so far, who has actually faced off with prosecutors in a trial. While the special counsel’s case against Manafort hasn’t publicly delved into the core issue of Russian interference in the 2016 presidential election, it has exposed his connections to Kremlin ally Oleg Deripaska and Konstantin Kilimnik, a longtime Russian-Ukrainian associate with what prosecutors say are ties to Russian intelligence.

Jackson noted there were “many references that pepper” the sentencing memo related to contacts between the Trump campaign and Russia-linked individuals. But, she emphasized, the question of collusion during the campaign, “was not resolved one way or another by this case,” a point that Trump is likely to crow about.

Attention will now likely shift to the president and whether the president will either commute his former aide’s sentence or pardon him outright.

Trump has repeatedly left open the possibility of giving Manafort clemency. The president’s lawyers maintained a controversial joint defense agreement to share information back and forth with Manafort’s attorneys, even after Manafort pleaded guilty. Last week, the president told reporters he felt “very badly” for Manafort, a longtime GOP operative who helped the Trump campaign in 2016 to beat back an internal party revolt at the Republican nominating convention.

White House press secretary Sarah Huckabee Sanders said Monday that that the president would make his decision on what to do about Manafort’s sentence “when he’s ready.”

Manafort’s brief and less-than-remorseful statement at his Virginia sentencing last week — he notably didn’t apologize for his actions — fueled suspicion that he may be seeking to boost his chances of a pardon or commutation.

Jackson picked up on that theme Wednesday.

“It was being repeated for some other audience,” she said. “So I probably don’t need to say too much about it.”

Manafort’s lawyers also contributed to speculation about a clemency bid by telling the court that his case could have been easily resolved if it was being handled by ordinary prosecutors and by echoing Trump’s mantra that there was “no collusion” between the president’s campaign and Russia.

On cue, Manafort attorney Kevin Downing emerged from the D.C. courthouse after his client’s sentencing to condemn Jackson’s decision as “disappointing,” though many of his comments were drowned out by yells from protesters. Downing said the Mueller case against Manafort had revealed no evidence of collusion between Russia and the Trump campaign, which immediately prompted cries of “treason” and “you’re a liar, not a lawyer!”

Downing pressed on, describing the judge’s sentence as “callous, it was hostile, it was unnecessary.”

“I think the judge showed she is incredibly hostile to Mr. Manafort,” Downing said, adding it was one of the least forgiving sentences he’d seen in his career.

No matter what Trump may do to nullify Manafort’s convictions or rein in his sentence, the president’s moves could have limited effect for Manafort personally. He’s already admitted in his guilty plea to tax and bank fraud offenses, and Manhattan District Attorney Cyrus Vance on Wednesday seized on what could be an apparent opening by rolling out a new 16-count grand jury indictment against Manafort for residential mortgage fraud and other alleged state crimes.

“No one is above the law in New York,” Vance said in a statement released just minutes after the conclusion of Manafort’s sentencing hearing in Washington.

Still unclear is how a Manafort prosecution would work in New York, which has a law preventing new trials for crimes pursued at the federal level. Legislators in the state reached an agreement Tuesday that would end the state’s double jeopardy law, however, and the bill is expected to become law “in a couple of weeks,” according to Tish James, the state’s Democratic attorney general.

Downing declined to comment on the New York charges.

Previously, Manafort’s lawyers have argued their client has already been broken “personally, professionally and financially” by his ongoing legal struggles.

Manafort’s lawyers have argued their client has already been broken “personally, professionally and financially” by his ongoing legal struggles.

“This case has taken everything from me: my properties, my cash, my life insurance, my trust accounts for my children and my grandchildren and even more,” Manafort said.

Indeed, federal prosecutors moved this week to begin seeking restitution of up to roughly $24 million, forfeiting several Manafort properties in New York, as well as bank accounts and a life insurance policy.

On Wednesday, Jackson entered her own order for $6.2 million in restitution payments for unpaid taxes, but said Manafort need not pay that amount twice. She did not impose any fine in the case.

“Paul Manafort’s upbringing, his education, his means, his opportunities, could have led him to lead a life and to be a leading example for this country,” he said. “At each juncture, though, Mr. Manafort chose to take a different path.”

Matthew Choi contributed to this report.