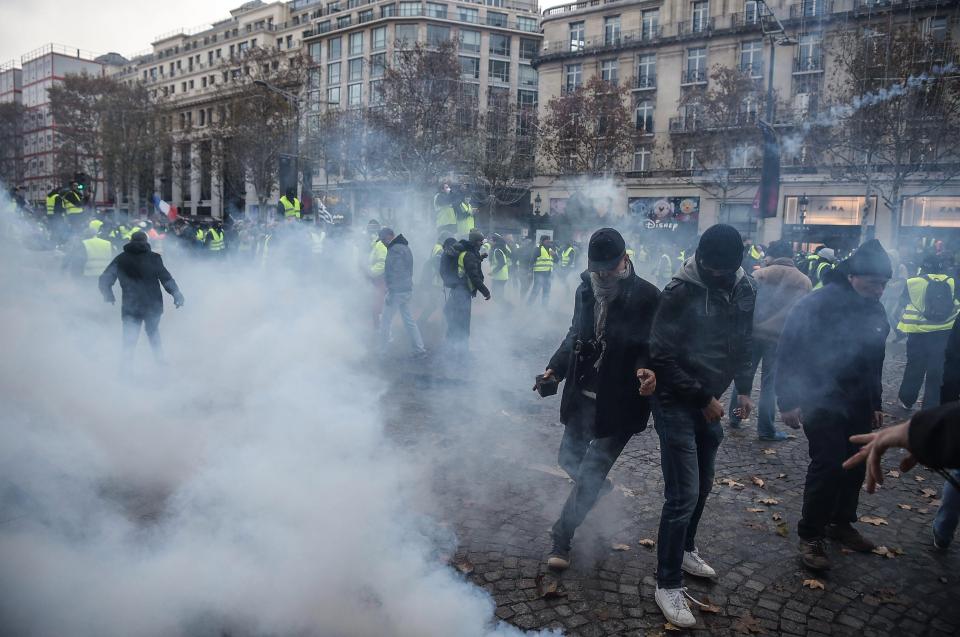 Police in Paris have used tear gas and water cannon to disperse protesters, in a second weekend of demonstrations sparked by rising fuel prices.

Violence erupted on the Champs-Elysées as protesters tried to get through a security cordon around sensitive sites.

About 5,000 protesters had converged on the avenue. Dozens of people were arrested after clashing with police.

Organisers of the “yellow vest” movement billed the latest protests as “act two” in their rolling campaign.

Named after their distinctive high-visibility attire, the protesters oppose an increase in fuel duty on diesel.

More than 100,000 took part in Saturday’s protests across the country. They passed off largely peacefully – except in the capital, where 8,000 demonstrators gathered.

What happened on the Champs-Élysées?

Five thousand police had been deployed in the Paris area. They had set up metal barriers around the Champs Élysées to stop protesters from reaching key buildings such as the president’s office and the national assembly.

Most demonstrators insisted that they were peaceful. “We are not here to pick a fight with cops, We just want the government to listen to us,” one of their spokespeople, Laetitia Dewalle, told AFP news agency

Some though tried to break through the police cordon. They lit fires, tore down street signs, erected barricades, pulled up paving stones and threw them at police while shouting slogans against President Emmanuel Macron.

The chaos continued into late afternoon. But by the evening police had cleared most of the area.

Officials say 19 people were injured in the clashes, including four officers.

Interior Minister Christophe Castaner accused protesters of being influenced by the leader of the far-right National Rally party, Marine Le Pen. But she accused him, on Twitter, of dishonesty.

What about elsewhere in France?

Demonstrations were staged around in the country. Roadblocks were set up to slow down traffic. Some motorway toll booths were taken over to let vehicles through.

There were a number of minor clashes. Overall 130 arrests were made.

The protests and the violence were on a much smaller scale than the previous week. Last Saturday more than 280,000 people took part, more than 600 people were injured and two people were killed.

Meanwhile, a march against sexual violence was kept well away from the latest unrest in Paris.

Similar protests took place across France, ahead of the UN’s day for the elimination of violence against women on Sunday.

Not just about fuel

The spark for the protest is clear, but there’s not much that unites the “yellow vests” beyond their high-visibility gear and their anger at rising taxes and living costs.

In a country where protests are often tightly managed by one political party or trade union, this is a movement with no recognized national leader, no formal structure or affiliation, which unites voters of all ages, from the far-left, the far-right, even those who once supported President Macron.

Their new co-operation is a sign that Mr. Macron has failed to restore their faith in politicians, and that deep divisions remain. These are not France’s most marginalized citizens, but those who say they struggle even while working, who feel they’re bearing the brunt of France’s economic problems, while businesses and the rich get tax breaks.

The government has blamed ultra-right gangs for the violence in Paris, but there are many peaceful citizens – both at the barricades and at home – who support the movement too.

Its diversity and democracy has been its strength so far, but also makes its ultimate vision unclear, and its membership hard to control.

All drivers in France have to carry the vests in their cars as part of safety equipment for use in a breakdown.

Along with the familiar red reflective triangle which must be placed behind a broken-down vehicle on the side of a road, the high-visibility vest – or “gilet jaune” – must be worn by the driver outside the car.