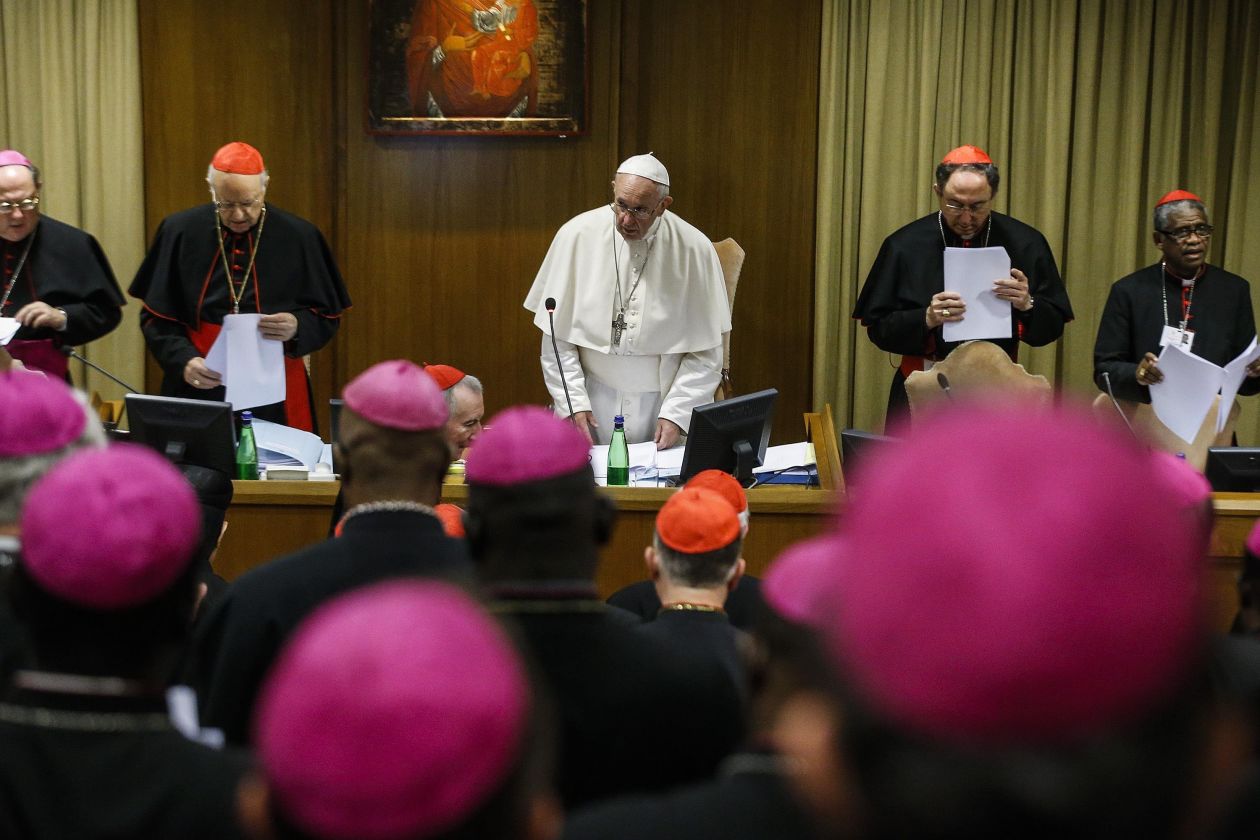 By Francis X. Rocca
ROME—Pope Francis told a gathering of bishops from around the world that the Catholic Church is being persecuted through accusations—an apparent allusion to clerical sex-abuse scandals that have undermined the credibility of the papacy and church hierarchy over the course of this year.

Addressing the closing session of a synod of bishops at the Vatican on Saturday, the pope repeated warnings he has made in recent weeks against the “Great Accuser,” or the devil, who “in this moment is accusing us strongly, and this accusation becomes persecution,” and who seeks to “soil the church.”

“This is the moment to defend our mother” the church, said the pope, in remarks unlikely to mollify critics who say he has failed to recognize the hierarchy’s responsibility for the abuse crisis. “The accuser is attacking our mother through us, and no one touches our mother.”

The gathering of more than 250 bishops was dedicated to the topic of youth, exploring how the church can better engage young Catholics and help them find roles in the church, whether as priests, nuns or lay members.

In a twist on the usual protocol at such gatherings, more than 30 lay Catholics below the age of 30 years attended the sessions, where they enlivened the atmosphere by clapping and cheering during some of the speeches.

A published agenda for the meeting made only passing reference to sex abuse, but after months of scandals in the U.S., Latin America and Australia—and the claim by a former Vatican diplomat that Pope Francis himself had ignored sexual misconduct by a U.S. cardinal—the subject inevitably loomed over the proceedings.

The 60-page final document, released late Saturday, devoted two paragraphs to the subject of abuse, calling for “rigorous measures of prevention,” starting with the selection and education of clergy and other church employees. Quoting Pope Francis, the document lays much of the blame for sex abuse on “clericalism,” or an excessive deference to the church’s hierarchy.

The final document is “frankly inadequate and disappointing on the abuse matter,” Archbishop Charles Chaput of Philadelphia, a member of the council that organized the synod, said in an email. “There’s very little sense of heartfelt apology in the text.”

The archbishop, who had previously called on the pope to cancel the gathering because of the sex-abuse crisis, said Saturday that “church leaders outside the United States and a few other countries dealing with the problem clearly don’t understand its scope and gravity.”

Some bishops from the developing world objected that their peers from western countries were overemphasizing sex abuse at the synod, according to Cardinal Oswald Gracias of Mumbai, who helped draft the final document, which touches on topics ranging from migration to the internet and their impact on the lives of young Catholics.

“To be fair to the synod, you can’t say (sex abuse is) the number-one thing,” Cardinal Gracias, who is also a top adviser to Pope Francis, told the Catholic website Crux. “The statement should answer the needs of the United States, Ireland, Australia, but not just them.”

The pope has called another international meeting of bishops to discuss clerical sex abuse for four days in February.

Another split between developed and developing countries at this month’s synod emerged in the debate over the church’s approach to gay people. The published agenda made news by using the term LGBT, apparently for the first time in an official Vatican document.

But the African bishops at the synod overwhelmingly opposed the use of LGBT, arguing it would create ambiguity about the church’s prohibition of any sexual activity outside of marriage between one man and one woman.

“We’ve got a very strong tradition in Africa of families, family life, and division of the sexes is very, very clear. If we come out with unclear statements, that same-sex attraction is OK and so on, it’s going to be completely misunderstood,” Cardinal Wilfrid Napier of South Africa, said in an interview.

The term LGBT doesn’t appear in the final document, which denounces “any discrimination and violence on the basis of sex” and encourages “accompaniment in the faith of homosexual persons.”