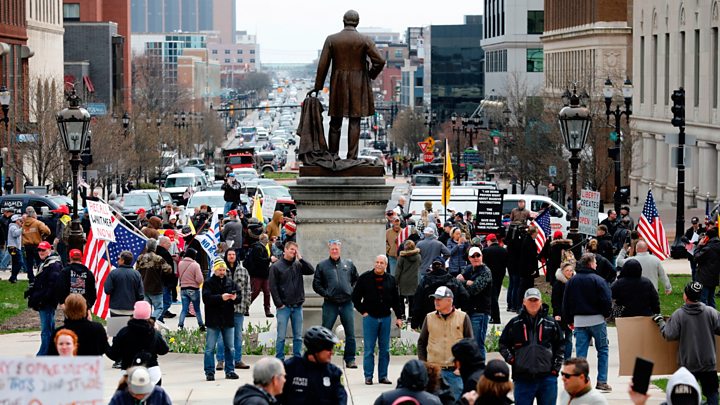 President Donald Trump has defended his tweets in which appeared to endorse protests against stringent lockdown measures in several US states.

At his Friday briefing, he said some measures imposed by Minnesota, Michigan and Virginia had been “too tough”.

Earlier, he wrote in a series of tweets: “LIBERATE MINNESOTA”, “LIBERATE MICHIGAN” and then “LIBERATE VIRGINIA”.

The curbs, including the stay-at-home orders, are needed to halt the spread of coronavirus, health officials say.

But protesters say they are hurting citizens, by limiting movement unreasonably and stifling economic activity.

The US saw its highest daily death toll on Thursday, recording 4,591 deaths in 24 hours.

That spike could be because Johns Hopkins University, which records the data, began to include deaths with a Covid-19 probable cause.

The US has the highest number of cases and deaths worldwide, nearly 700,000 confirmed infections and more than 36,000 deaths, according to Johns Hopkins.

Demonstrations calling on authorities to end the shutdown have occurred in Michigan, Ohio, North Carolina, Minnesota, Utah, Virginia and Kentucky.

The states Mr Trump referred to in Friday’s tweets are all led by Democrats. Ohio and Utah, which he did not mention, have Republican governors.

More demonstrations are planned, including in Wisconsin, Oregon, Maryland, Idaho and Texas.

The protests have varied in size, ranging from a few dozen people in Virginia to thousands in Michigan.

His Friday tweets contrast with his stance on Thursday, where he said he was sympathetic to the demonstrators, but “they seem to be protesters who like me… my opinion is just about the same as all of the governors”.

Minnesota Governor Tim Walz responded to the tweets, saying he called the White House to ask “what they think we could have done differently”, but did not hear back.

“The president unveiled a three step plan that mirrors exactly what we’re trying to do,” Mr Walz told reporters.

“I called to ask, what are we doing differently about moving towards getting as many people back into the workforce without compromising the health of Minnesotans or the providers?

“And that will probably take longer than a two-word tweet, but I think there’s responsibility to tell us that.”

What does federal guidance say?

That guidance recommends three phases of slowly re-opening businesses and social life, with each phase lasting a minimum of 14 days.

It includes some recommendations across all three phases including good personal hygiene and employers developing policies to ensure social distancing, testing and contact tracing.

Dr Anthony Fauci, from the White House coronavirus taskforce, cautioned that even as restrictions were eased “it’s not game over”.

He warns that the virus may rebound, and there could be setbacks along the way

Upping the pressure – and political risk

The governor of one, Michigan’s Gretchen Whitmer, recently was the target of a mass protest at the state capital against her sweeping lock-down orders. A mixed crowd of conservatives, white nationalists and anti-government militias waved Confederate and pro-Trump flags, and signs accusing Whitmer of dictatorial overreach.

Another of the states, Virginia, had its own capital protests earlier in the year from gun-rights activists.

The president’s social media fusillade suggests his goal is to reward – or encourage – such shows of force from his political base, as opinion polls indicate Trump’s approval rating is sagging after a boost during the early weeks of the outbreak.

Trump followed those incendiary tweets by criticising New York’s Andrew Cuomo, another Democrat, for mishandling the pandemic and spending too much time “complaining”.

Just a day after Trump reportedly told governors in a conference call they would “call the shots” on when to begin easing restrictions, it appears the president wants to up the pressure – and the political risk – for Democrats by other means at his disposal.

Trump has benefitted in the past from a finely tuned sense of the sentiments – and resentments – of his supporters. Friday morning could be an indication that he’s positioning himself to again stand in their midst.

Why are people protesting?

Protesters say stringent restrictions on movement and businesses are an overreaction to the outbreak.

Organisers of the Liberate Minnesota protest wrote on Facebook: “It is not the governor’s place to restrict free movement of Minnesota citizens!”

“President Trump has been very clear that we must get America back to work very quickly or the ‘cure’ to this terrible disease may be the worse option!”

The group added that the state’s economy “will be dealt a death blow” if restrictions continue.

The event now has over 600 attendees marked on Facebook and some 2,800 more users interested in the event.

However, public health experts, and some state governors, including Republican governors, have stressed the importance of social distancing.

The group of medical, public and private sector leaders will look into what services and activities may resume under existing guidelines.

The governor will offer a re-opening plan based on the findings on 27 April.

In addition, Mr Abbott said retail outlets that are able to deliver goods to customer’s cars, homes or other locations with minimal contact may begin operating on 24 April.

In Florida, the mayor of Jacksonville said he would re-open beaches with limited hours starting Friday.

Mayor Lenny Curry said residents must still practice social distancing, but could use beaches for exercise and recreation.

Parks in the city will also be opened, though gatherings of more than 50 are banned.