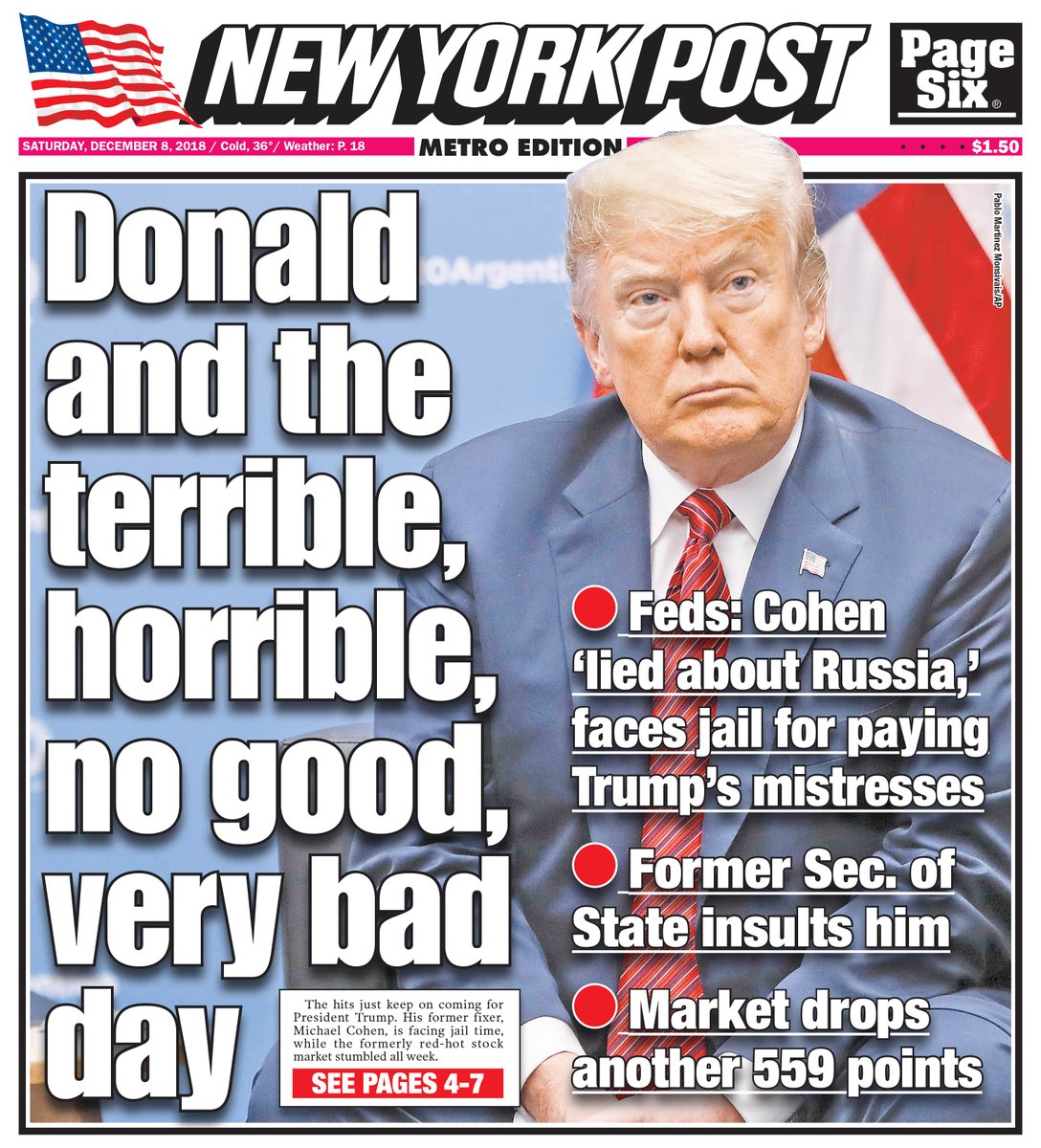 Federal prosecutors said on Friday that President Trump directed illegal payments to ward off a potential sex scandal that threatened his chances of winning the White House in 2016, putting the weight of the Justice Department behind accusations previously made by his former lawyer.

The lawyer, Michael D. Cohen, had said that as the election neared, Mr. Trump directed payments to two women who claimed they had affairs with Mr. Trump. But in a new memo arguing for a prison term for Mr. Cohen, prosecutors in Manhattan said he “acted in coordination and at the direction of” an unnamed individual, clearly referring to Mr. Trump.

In another filing, prosecutors for the special counsel investigating Russia’s 2016 election interference said an unnamed Russian offered Mr. Cohen “government level” synergy between Russia and Mr. Trump’s campaign in November 2015. That was months earlier than other approaches detailed in indictments secured by prosecutors.

And in a separate case on Friday, the special counsel accused Paul Manafort, Mr. Trump’s campaign chairman, of lying about his contacts with an individual they accuse of ties to Russian intelligence, and about his interactions with Trump administration officials after he was indicted on criminal charges.

Together, the filings laid bare the most direct evidence to date linking Mr. Trump to potentially criminal conduct, and added to an already substantial case that Russia was seeking to sway the 2016 election in his favor.

Mr. Trump sought on Friday to dismiss the news, wrongly claiming it “Totally clears the President. Thank you!”

© Jefferson Siegel for The New York Times Michael Cohen, who was President Trump’s personal lawyer and fixer for more than a decade, leaving federal court in Manhattan last week after a guilty plea.The White House press secretary, Sarah Huckabee Sanders, was less unequivocal. “The government’s filings in Mr. Cohen’s case tell us nothing of value that wasn’t already known,” she said in a statement. “Mr. Cohen has repeatedly lied and as the prosecution has pointed out to the court, Mr. Cohen is no hero.”

She tried to distance Mr. Trump from the accusations against Mr. Manafort, who was convicted of financial fraud and conspiracy charges unrelated to his work for the Trump campaign. President Trump has repeatedly defended Mr. Manafort as a “brave man” and dangled the possibility of a pardon for his 10 felonies, likely to result in a prison term of at least 10 years.

The revelations came in multiple filings by federal prosecutors for the Southern District of New York and by the special counsel, Robert S. Mueller III. Their work has intersected because both teams have charged Mr. Cohen with crimes, and he had sought to cooperate with both.

The prosecutors in New York mounted a scathing attack on Mr. Cohen’s character. They rejected his plea to avoid a prison term, saying that he had “repeatedly used his power and influence for deceptive ends.”

They argued that he deserved a “substantial” prison term that, giving him some credit for his cooperation, would amount to just under four years. “His offenses strike at several pillars of our society and our system of government: the payment of taxes; transparent and fair elections; and truthfulness before government and in business,” they wrote.

Mr. Cohen, 52, is to be sentenced next week for a guilty plea to campaign finance violations and financial crimes, and a second plea to lying to Congress about the extent of Mr. Trump’s business dealings in Russia.

Mr. Cohen’s crimes marked “a pattern of deception that permeated his professional life,” the Manhattan prosecutors wrote, saying that he did not deserve much leniency in exchange for cooperating with the government. “The sentence imposed should reflect the seriousness of Cohen’s brazen violations of election laws and attempt to counter the public cynicism that may arise when individuals like Cohen act as if the political process belongs to the rich and powerful,” they said, adding that he “sought to influence the election from the shadows.”

They emphasized that Mr. Cohen had implicated the president in payments during the campaign to two women to conceal affairs that they said they had with Mr. Trump. “Cohen himself has now admitted, with respect to both payments, he acted in coordination with and at the direction of Individual-1,” the prosecutors wrote. “Individual-1” is how Mr. Trump is referred to in the document.

The prosecutors have said that a $130,000 payment to Stormy Daniels, a pornographic film actress, violated campaign finance law prohibitions against donations of more than $2,700 in a general election. A $150,000 payment by American Media Inc. to silence Karen McDougal, a former Playboy model, constituted an illegal corporate donation to Mr. Trump’s campaign, the prosecutors said.

The special counsel’s prosecutors offered a somewhat positive view of Mr. Cohen than the New York team, saying he went “to significant lengths to assist” their inquiry by providing relevant information he had learned from Trump Organization executives during the campaign.

Over seven meetings with the special counsel’s office, prosecutors said Mr. Cohen had revealed details about a meeting that appeared to be the earliest known contact between a Russian offering to help Mr. Trump’s campaign, disclosed earlier this year by BuzzFeed.

In November 2015, as discussions about a possible Trump Tower in Moscow were gaining momentum, Mr. Cohen told prosecutors he was approached by a Russian claiming to be a “‘trusted person’ in the Russian Federation,” who offered “synergy on a government level” with the Trump campaign, they said.

The individual, who was not named, pushed for a meeting between Mr. Trump and President Vladimir V. Putin of Russia. Such a meeting, he said, could have a “‘phenomenal’ impact ‘not only in political but in a business dimension as well.’”

Mr. Cohen told the special counsel’s team that he never followed up on the invitation.

Mr. Cohen also revealed that Mr. Trump had been more involved in discussions over a potential deal to build a tower in Moscow than was previously known. Although he testified to Congress that negotiations ended in January 2016, before the first Republican presidential primary, he told prosecutors that those discussions had continued until June of that year, just before Mr. Trump won the Republican nomination and only five months before the election.

Mr. Cohen made numerous inquiries with Russian officials about the project, raising the possibility that the Russians might have tried to use that as leverage over Mr. Trump when he was running for president.

Before he testified falsely to Congress, Mr. Cohen has admitted, he consulted with White House staff members and Mr. Trump’s “legal counsel.” He said he lied out of loyalty to Mr. Trump and to be consistent with the president’s “political messaging.”

They portrayed him as a remorseful man whose life had been shattered by his relationship with Mr. Trump. They said Mr. Cohen had lost friends and professional relationships and wanted to confess his crimes, serve any sentence imposed and begin his life anew.

Under federal guidelines, Mr. Cohen faces about four to five years in the Manhattan case, and up to six months in Mr. Mueller’s case, which the special counsel suggested be served concurrently. But the guidelines are not binding, and a federal judge will decide the final sentence.

Mr. Trump has accused Mr. Cohen of lying to prosecutors in hope of a lighter sentence, while trying to undermine public trust in the special counsel’s office and broadly, in the Justice Department. He kept up those attacks on Friday. In a series of Twitter messages, he derided Mr. Mueller as a friend of James B. Comey, the former F.B.I. director who said the president fired him in May 2017 after demanding “loyalty.”

Asked why the president was so upset about the special counsel, Roger J. Stone Jr., a friend and fellow critic of Mr. Mueller, said it had dawned on Mr. Trump that the inquiry is not going away, his lawyers’ promises notwithstanding. “He has finally figured out that this is about him,” he said. “I think he has finally woken up.”

Spurred on by the White House, House Republican lawmakers used their last days in control of the chamber’s majority to press Mr. Comey on Friday on what they claim is a pattern of abuse of power by the F.B.I. Mr. Comey reluctantly agreed to testify behind closed doors on Capitol Hill after the House Judiciary and Oversight and Government Reform committees agreed to release a public transcript of his testimony.

Lawmakers emerged frustrated that Mr. Comey had not been allowed to answer questions about classified matters involving the Mueller investigation, in which he is a central witness. Mr. Trump took up their complaints, tweeting that Justice Department lawyers had demonstrated “total bias and corruption at the highest levels of previous Administration.”

Emerging after six hours of questioning, Mr. Comey defended the F.B.I.’s actions in the Russia case, and accused Republicans of a continued preoccupation with the bureau’s handling, during the 2016 campaign, of an inquiry into Hillary Clinton’s use of a private email server.