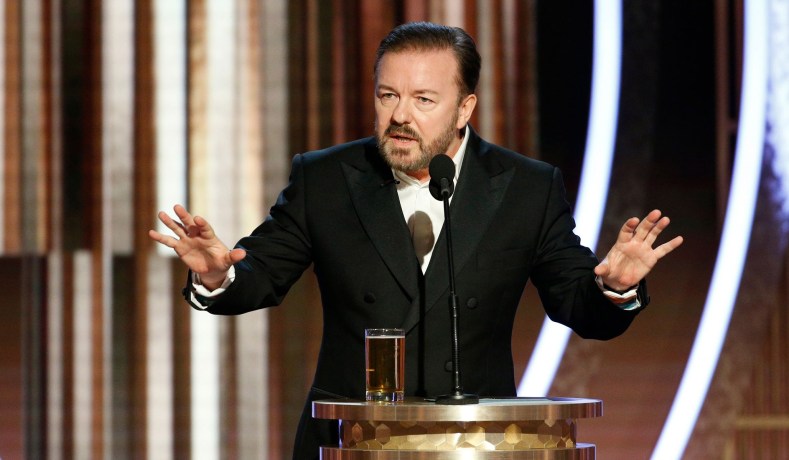 Once again, Golden Globes host Ricky Gervais did not shy away from hot-button topics in his monologue, even as he told the stars attending on Sunday not to elongate their acceptance speeches by referring to contentious current events.

At the top of the annual ceremony at the Beverly Hilton, Gervais ended his monologue by telling the nominees: “So if you do win an award tonight, don’t use it as a political platform to make a political speech. You’re in no position to lecture the public about anything. You know nothing about the real world. Most of you spent less time in school than Greta Thunberg. So, if you win, come up, accept your little award, thank your agent and your God and fuck off. OK?”

Gervais’ swear word was bleeped out on NBC. He was also bleeped for his use of profanity in two other jokes: one where he called Cats‘ James Corden a “fat pussy” and another where he discussed the same film’s Judi Dench “licking her ass.”

The comedian, however, also peppered the monologue with references to #MeToo and contemporary issues. He started off by noting that it was his fifth time hosting, and therefore he didn’t care what flak he would take. Then he punched in with a nod to last year’s college admissions scandal: “I came here in a limo tonight and the license plate was made by Felicity Huffman,” he said, referring to the actress’ prison sentence.

Golden Globes: Read Ricky Gervais’ Scathing Opening MonologueGervais noted that top film executives present at the ceremony may have come from different companies, “but they all have one thing in common: They’re all terrified of Ronan Farrow. He’s coming for you, he’s coming for you.”

At another point, the host noted that the Golden Globes was an old-fashioned awards show, and asserted the ceremony should just thank Netflix and get on with it. Gervais pointed out he has a show on Netflix, Afterlife, about a man considering committing suicide after his wife dies. “Spoiler alert, there’s a season two, so in the end, he didn’t kill himself. Just like Jeffrey Epstein. Sorry, I know he’s your friend,” Gervais joked to the A-list audience.

Epstein came up again when Gervais took aim at Quentin Tarantino’s Once Upon a Time in Hollywood: “Leonardo DiCaprio attended the premiere and by the end, his date was too old for him. Even Prince Andrew was like, ‘C’mon, mate.'” (Gervais was referring to allegations that Epstein’s former friend Prince Andrew sexually assaulted a girl trafficked by Epstein.)

While discussing the addition of Apple TV+ to the room, Gervais noted the irony of a #MeToo-themed show like The Morning Show being “made by a company who runs sweatshops in China. You say you’re woke, but … if ISIS started a streaming service you’d call your agent.”

Gervais has developed a reputation for unpredictability while prodding Hollywood’s elite on the Beverly Hilton stage. The comedian and British Office creator infamously made a dig about a car accident involving Caitlyn Jenner at the 2016 ceremony and Angelina Jolie’s humanitarian work and international adoptions in 2010. But in an interview with The Hollywood Reporter prior to this year’s ceremony, he insisted that he wants to make his jokes “bulletproof” this time around.

“Kevin Hart [lost] his job [as Oscars host] for 10-year-old tweets that he said he was sorry about and deleted at the time,” Gervais said. “So there’s more pressure on making [the jokes bulletproof]. It’s the world [watching]. This isn’t me in a comedy club.”