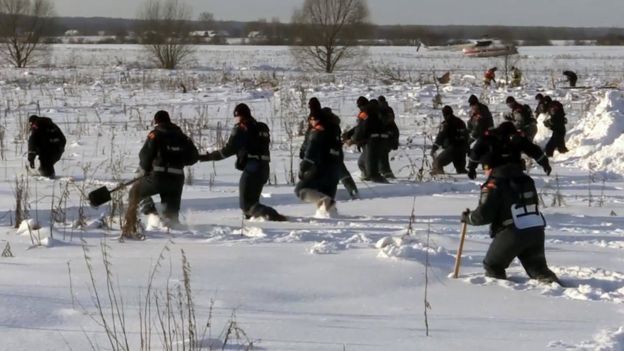 The 65 passengers and six crew died when the Saratov Airlines jet went down minutes after take-off from Moscow’s Domodedovo airport on Sunday.

Officials do not see terrorism as a likely cause.

According to Russia’s Investigative Committee, “when the plane crashed it was intact, there was no fire, and the explosion happened on impact”.

Earlier some eyewitnesses had reported seeing the jet ablaze as it plummeted.

This is the first commercial passenger jet crash for more than a year.

The Antonov An-148 was en route to Orsk in the Ural mountains.

It crashed near the village of Argunovo, about 80km (50 miles) south-east of Moscow. Wreckage and body parts are strewn over a large area – about 30 hectares (74 acres).

More than 700 people are involved in the search operation, struggling through deep snow, but aided by snowmobiles and nine drones.

Who are the victims?

Russia’s health minister said recovery of all of the victims’ remains could take up to a week. So far more than 200 body fragments have been recovered.

The emergencies ministry is collecting DNA samples from victims’ relatives – specialists have flown to Orsk to do that.

The official list of passengers and crew has been published (in Russian) by the ministry.

A child and two teenagers were among the passengers, most of whom were from the Orenburg region where Orsk is located.