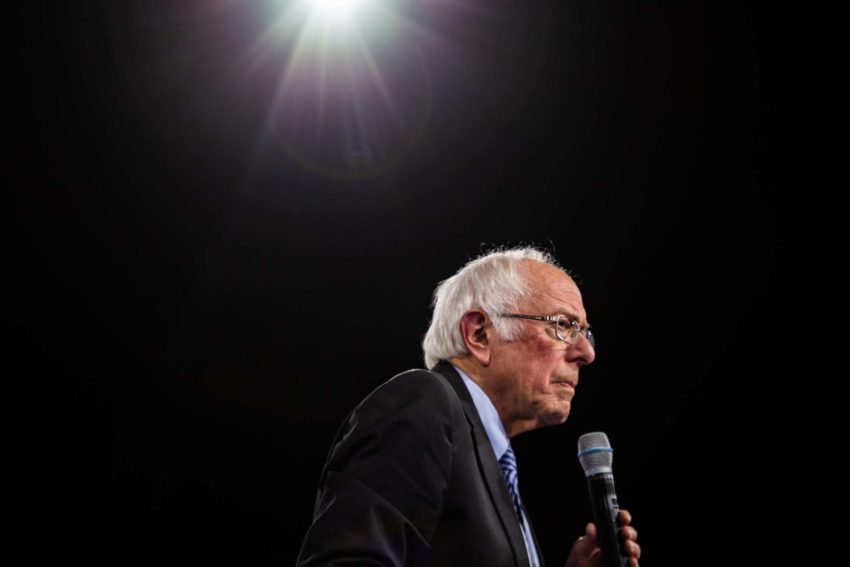 Bernie Sanders briefed by U.S. officials that Russia is trying to help his presidential campaign

U.S. officials have told Sen. Bernie Sanders that Russia is attempting to help his presidential campaign as part of an effort to interfere with the Democratic contest, according to people familiar with the matter.

President Trump and lawmakers on Capitol Hill also have been informed about the Russian assistance to the Vermont senator, those people said, speaking on the condition of anonymity to discuss sensitive intelligence.

It is not clear what form that Russian assistance has taken. U.S. prosecutors found a Russian effort in 2016 to use social media to boost Sanders’s campaign against Hillary Clinton, part of a broader effort to hurt Clinton, sow dissension in the American electorate and ultimately help elect Donald Trump.

“I don’t care, frankly, who [Russian President Vladimir] Putin wants to be president,” Sanders said in a statement. “My message to Putin is clear: Stay out of American elections, and as president I will make sure that you do.

“In 2016, Russia used Internet propaganda to sow division in our country, and my understanding is that they are doing it again in 2020. Some of the ugly stuff on the Internet attributed to our campaign may well not be coming from real supporters.”

The disclosure of Russian assistance to Sanders follows a briefing to lawmakers last week in which a senior intelligence official said that Russia wants to see Trump reelected , viewing his administration as more favorable to the Kremlin’s interests, according to people who were briefed on the comments.

In that closed hearing for the House Intelligence Committee, lawmakers were also told that Sanders had been informed about Russia’s interference. The prospect of two rival campaigns both receiving help from Moscow appears to reflect what intelligence officials have previously described as Russia’s broader interest in sowing division in the United States and uncertainty  about the validity of American elections.

At a rally Friday in Nevada, Trump called reports that Putin wanted to help him “disinformation.”

“Wouldn’t he rather have Bernie, who honeymooned in Moscow?” Trump asked, referring to the senator’s travels in the former Soviet Union.

Sanders told reporters Friday after The Post’s report was published that he received the briefing “about a month ago.” Asked why he did not disclose the briefing publicly, Sanders replied, “Because I go to many intelligence briefings which I don’t reveal to the public.”

Sanders offered few details about what officials told him.

The Nevada Democratic debate in less than 4 minutes
“Well, it was not clear what role they’re going to play,” he said, referring to Russia. “We were told that Russia, maybe other countries, are going to get involved in this campaign. And look, here’s the message, to Russia — stay out of American elections.”

Asked why the briefing was reported now, a month later, Sanders said: “I’ll let you guess about one day before the, the Nevada caucus. Why do you think it came out?”

“We report news when we learn it,” said Kristine Coratti, a spokeswoman for The Post.

A spokesperson for the FBI declined to comment. The Office of the Director of National Intelligence did not respond to requests for comment.

The intelligence assessment that Russia had a preference for Trump infuriated the president. Trump lambasted his then-acting intelligence director, Joseph Maguire, and DNI staff for sharing that information with lawmakers, believing that Democrats would use it to hurt Trump in the election.

The president has been told that the Russians are also trying to sow discord among Democrats and want to influence the primary, a senior administration official said. Intelligence officials also have told Trump that Russia wanted to help Sanders, the official said, declining to say when Trump was informed.

Sanders has frequently warned about the threat of foreign interference in U.S. elections and criticized Trump for not doing enough to stop it.

“Let me be clear: We must not live in denial while allowing Russia and other state actors to undermine our democracy or divide us,” the senator said in January. “Russia targets the divisions in our society; we will work to heal those divisions.”

Sanders’s opponents have blamed some of his most vocal online supporters for injecting toxic rhetoric into the primaries. At a Democratic candidates debate Wednesday in Las Vegas, Sanders indirectly blamed Russia, saying it was possible that malign actors were trying to manipulate social media to inflame divisions among Democrats.

“All of us remember 2016, and what we remember is efforts by Russians and others to try to interfere in our elections and divide us up,” Sanders said. “I’m not saying that’s happening, but it would not shock me.”

In recent weeks, Sanders’s rivals have raised concerns about the behavior of his supporters, blaming them for viciously attacking an influential Nevada culinary union that criticized his health care plan and said the senator did not do enough to tamp down the online rhetoric of his most ardent advocates.

The senator has responded by distancing himself from such actions, questioning on several occasions whether the online rhetoric was coming from genuine Sanders supporters.

Sanders spent Friday campaigning in California and planned to finish the day in Nevada with an evening rally designed to build excitement for his campaign ahead of Saturday’s caucuses.

Despite Trump’s skepticism of Russian efforts to damage American democracy, officials in his administration have repeatedly warned that Russia has ongoing plans to interfere in U.S. elections and foster divisions among Americans, part of a strategic goal to undermine U.S. standing in the world. Some analysts believe the Kremlin’s goal is to cause maximum disruption within the United States and that it throws the support of its hackers and trolls behind candidates based on that goal, not any particular affinity for the people running.

“Russian attempts to sow discord in the Democratic primary would be consistent with its strategy of undermining Americans’ faith in democratic institutions and processes,” said Laura Rosenberger, a former National Security Council aide in the Obama administration who is now an election security expert with the Alliance for Securing Democracy. “We have seen consistent messaging from Russian sources pushing the narrative that the primary process is rigged, and driving the idea that the ‘establishment’ favors some candidates over others.”

​“Many of us have been warning for some time that the Russians would likely try to drive divisions and discord in the Democratic primary, as they did in 2016,” Rosenberger said.

Russia has tried to assist Sanders in the past.

In a February 2018 indictment of 13 Russian individuals and three companies alleged to have orchestrated the 2016 social media scheme, prosecutors charged that the group “engaged in operations primarily intended to communicate derogatory information about Hillary Clinton, to denigrate other candidates such as Ted Cruz and Marco Rubio, and to support Bernie Sanders and then-candidate Donald Trump.”

Special counsel Robert S. Mueller III also alleged that, working with WikiLeaks, the Russian government purposely released stolen internal Democratic Party emails on the eve of the Democratic National Convention in July 2016, so as to exacerbate party divisions and a sense of grievance by Sanders supporters.