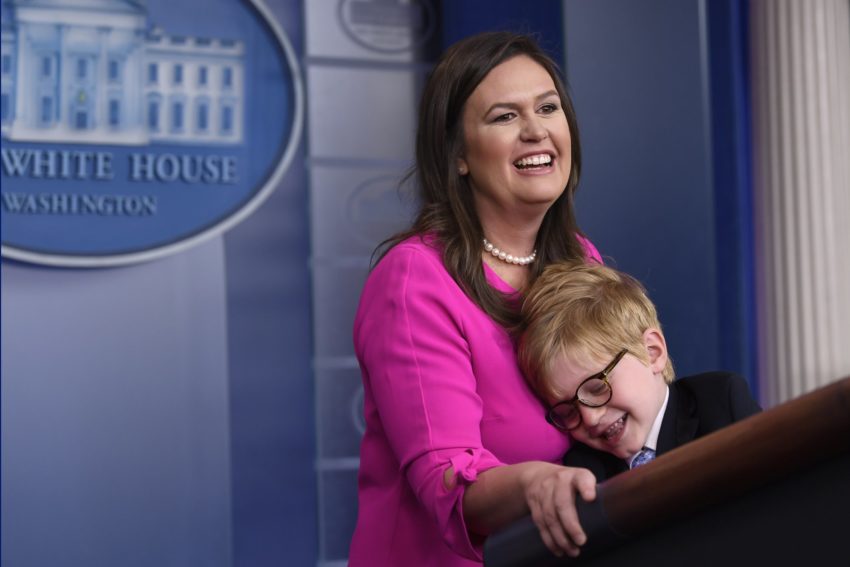 Instead, Sanders held what the White House called a “kids-only” press briefing for children participating in “Take Our Daughters and Sons to Work Day.”

Journalists who cover President Donald Trump and the White House on a daily basis have been waiting for a similar opportunity since March 11, the last time Sanders held a briefing.

Adding to the disconnect, the White House announced that the briefing would be off the record and not for broadcast, meaning news organizations would be barred from reporting on the Q-and-A or airing video of the session.

But both parties must agree for material to be off the record, meaning it cannot be published. The Associated Press and some other news organizations did not agree to those terms.

AP spokeswoman Lauren Easton said in a statement: “While we welcome the idea of children asking questions of White House officials, AP also expects the same opportunity to be afforded to the press. An off-the-record briefing in the briefing room circumvents the public’s legitimate right to know about what is happening inside the White House.”

Sanders, who brought her three children with her to the lectern, opened by announcing that Trump will travel to Colorado on May 30 to be the U.S. Air Force Academy’s commencement speaker, and next week will welcome 2018 NASCAR Cup Series Champion Joey Logano to the White House.

The questions put to her ran the gamut from policy to fluff, from her views on Trump’s former policy of separating migrant families as they attempt to enter the U.S. from Mexico to the president’s plans for first lady Melania Trump’s birthday Friday.

“Look, the president wants to keep families together and it’s something that is important,” Sanders said about family separation. “We want to make sure people are safe.”

Trump met with the kids later Thursday on the South Lawn. He recalled warning his daughter Ivanka to never take drugs, drink alcohol or smoke, to the point she’d reply, “Dad, enough already.”

Trump even had kind words for the media, though he included a couple jabs.

“I see these beautiful children, products of the media,” he said. “I actually like you much more than your parents.”

At another point, he explained the role of the White House press corps to the children.

“They let you know how we’re doing and often times they report correctly, actually most of the time,” Trump said.

Sanders’ appearance was her first in the White House press briefing room since a redacted version of special counsel Robert Mueller’s Russia report was released last Thursday. The 448-report revealed that Sanders admitted to investigators that she had made an unfounded claim that “countless” FBI agents had reached out to express support for Trump’s decision to fire FBI Director James Comey in May 2017.

Questions about Sanders’ credibility resurfaced after the revelation, which led some journalists and others to call for her to resign or be fired. She made an oblique reference to the situation Thursday after being asked what job she would have if she didn’t work at the White House.

“I don’t know,” she replied. “If you have any ideas, you let me know because there are some people that want me to be out of my job sometime, so I’ve got to look for a backup plan.”