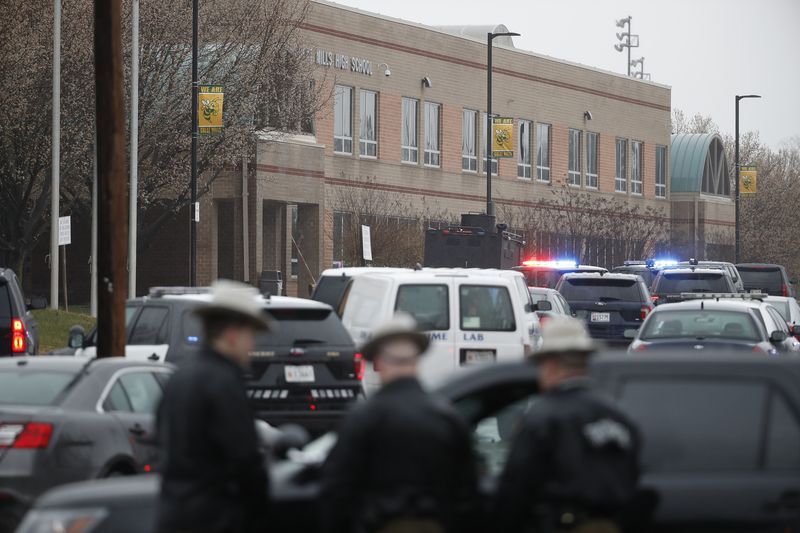 A gunman who shot and injured two teenage students at a high school in the US state of Maryland was shot dead by an officer, police say.

Rollins had a prior relationship with the girl, Sheriff Tim Cameron said.

The school shooting comes a month after a high school shooter killed 17 in Parkland, Florida.

Blaine Gaskill, an armed campus guard, exchanged gunfire with the attacker but it is unclear if the gunman was hit by the guard’s gunfire or shot himself.

Mr. Cameron said the shooting began in a hallway at the school.

The gunman fired at a female and then a male student, hitting them both, he said.

“Our school resource officer who was stationed inside the school was alerted,” he told reporters.

Three people, including the gunman, were injured in the attack
“He pursued the shooter, engaged the shooter. During that engagement he fired a round at the shooter.

“Simultaneously, the shooter fired a round as well,” he said.

Mr Gaskill was not hurt, Mr Cameron said, adding that the gunman’s cause of death was still under investigation.

The female student is in a critical condition in hospital. Some 1,600 students attend the school in the community of Great Mills near the Chesapeake Bay and were evacuated to a nearby school after the event.

Federal agents from the FBI, and the Bureau of Alcohol, Tobacco, Firearms and Explosives – as well as local police – are at the school investigating the incident.

One Twitter user, who appears to be a student at the school, posted about the shootings.