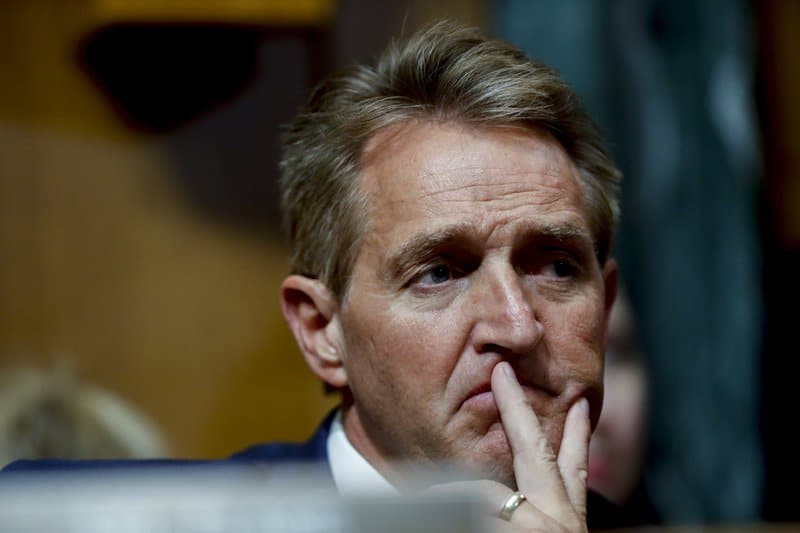 Flake agreed to send Kavanaugh’s nomination to the full Senate, but would not support a floor vote for Kavanaugh without allowing the investigation to happen.

The Arizona Republican had indicated earlier in the day his support for the judge, but pushed the nomination in a new direction after meeting privately at length with U.S. Sen. Chris Coons, D-Delaware, who is a member of the committee and a close personal friend.

“This country is being ripped apart here,” Flake said. “I do think we can have a short pause and have the FBI investigate. … It would be short and limited in scope to the current allegations here.”

President Donald Trump signaled he was open to a delay. Senators should do “whatever they think is necessary” to get to a vote on Kavanaugh, Trump told reporters before meeting with President Sebastian Pinera of Chile.

Sen. Jeff Flake, R-Ariz., speaks during the Senate Judiciary Committee meeting on Friday, Sept. 28, 2018, on Capitol Hill in Washington. Flake said it would be “proper” to delay a Senate floor vote on Supreme Court nominee Brett Kavanaugh for a week.

“This was kind of a surprise to all of us,” said U.S. Sen. Amy Klobuchar, D-Minnesota. “Did we actually expect this to happen today? No. but we’re in a better place.”

The development added even more drama to a process in which Flake has reluctantly played a crucial role.

Flake disappeared from the hearing as his turn to speak to the committee neared.

Before the hearing began, Flake announced his crucial support for Kavanaugh. Not long after, in a dramatic moment captured on live television, two women tearfully confronted Flake in an elevator and demanded he justify his decision.

“Look at me when I’m talking to you!” said one of the women, who said she had been sexually assaulted.

“You’re telling me that my assault doesn’t matter, that what happened to me doesn’t matter and that you’re going to let people who do these things into power!”

For Flake, the Kavanaugh nomination has repeatedly thrust him into a critical role in a historic Supreme Court nomination.

Flake helped slow the Kavanaugh confirmation process earlier this month when he said he was uncomfortable proceeding without hearing from his accuser, Christine Blasey Ford, at all. Shortly afterward, the committee arranged for a hearing with her and Kavanaugh to address the allegations.

On Wednesday, the day before her testimony, Flake commanded national attention again when he said he had received a death threat over the Kavanaugh nomination, as had Kavanaugh and his accuser.

Flake didn’t question Blasey Ford about her allegations, joining his Republican colleagues in outsourcing that task to Rachel Mitchell, a Maricopa County sex-crimes prosecutor dispatched to Washington for the hearing.

He didn’t question Kavanaugh, either. Instead, in a one-minute speech at the end of the daylong hearing, Flake only offered his regrets about the process.

On Thursday, Blasey Ford detailed what she remembered of a 1982 party in which she said she was attacked by Kavanaugh and a friend of his. Her testimony was widely praised as courageous and credible.

Supreme Court nominee Brett Kavanaugh was at times weepy and angry during his lengthy opening statement on his sexual assault allegations before the Senate Judiciary Committee. He testified shortly after his accuser Christine Ford.

But Kavanaugh may have rescued his confirmation chances Thursday with his defiant insistence that he never sexually assaulted Blasey Ford, or anyone else.

Even without the committee’s approval, Kavanaugh still could receive a vote from the Senate as a whole, but Republicans can only afford one defection from their party without depending on Democrats for help.

From the time Trump nominated Kavanaugh in July, Flake said he would evaluate the judge on his own merits, rather than sabotage a president he views with dismay.