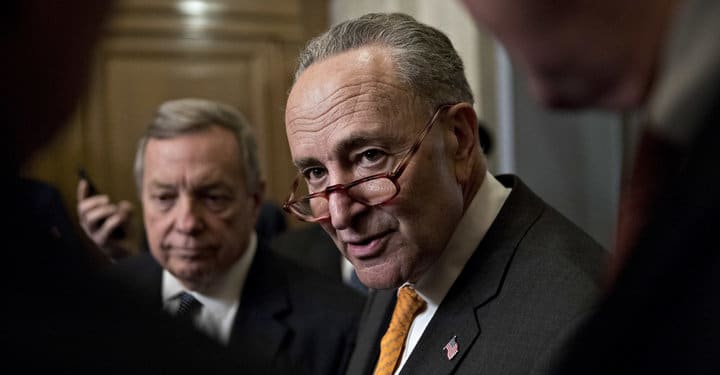 There’s an important battle brewing between President Donald Trump and congressional Democrats, one with serious implications for the way the country is governed. No, I’m not referring to the prospect of another government shutdown, though that is serious. I mean the actual staffing of the government, the top officials who run our federal agencies.

It’s a contest with high stakes, particularly for Democrats, who control few levers of power in Washington, despite their new majority in the House of Representatives. And yet the tussle over regulatory nominations has flown under the radar in political media, obscured by more explosive confrontations.

For several months now, the Trump administration has kept Wall Street watchdog posts vacant by sitting on Democratic nominations. And for months progressive political organizations have been leaning on Senate Democrats to do something ― anything ― about it.

“What’s going on right now is unprecedented,” according to Jeff Hauser, executive director of the Revolving Door Project at the left-leaning Center for Economic Policy and Research. “And the Democrats are allowing Republicans to do it without exerting either tactical leverage or rhetorical leverage by speaking out against it.”

Most federal agencies have a chairperson or top-level official who runs the show. The president gets to select that person, and while Democrats can cry foul over nominees they don’t like, there isn’t a whole lot they can do without Republican help to block a Trump candidate for these jobs.

But Democrats do have influence over a host of other positions that wield real power. The Securities and Exchange Commission, for instance, is designed to be bipartisan ― two of the five commissioners that run the agency can’t come from the president’s party. While the Republican majority will always have the final say, there’s a lot that a Democratic commissioner can do ― document corporate abuses, lean on enforcement staff and negotiate with Republicans over the regulatory agenda.

Consider the Federal Trade Commission. Last year, Democratic FTC Commissioner Rohit Chopra published a pointed memo about the need to punish “recidivist” corporate offenders. It was a not-so-subtle jab at Facebook, which has been operating under a consent order from the FTC since 2011. Under the order, Facebook had agreed to reform the way it tracked user data and shared those data with other companies. If Facebook violated the terms of that order ― and the company’s mounting heap of scandals makes it seem increasingly likely that it did ― then, Chopra suggested, the FTC should take strong punitive measures to demonstrate that large corporations are not above the law.

Chopra can’t force the Republican-controlled FTC to actually do anything. But his memo made quite a splash. Where in the past weak regulators might have hurried to absolve Facebook with a slap-on-the-wrist penalty, Republicans at the FTC now face the prospect of public humiliation if they carry water for the tech company during its ongoing meltdown.

Chopra is one of the few Democratic nominees to make it through the Trump administration logjam. Last summer, Senate Minority Leader Chuck Schumer (D-N.Y.) recommended Trump fill open Democratic posts at the SEC and the Federal Deposit Insurance Corp. with longtime regulator Allison Lee and FDIC veteran Martin Gruenberg. In November, he recommended Graham Steele, a former staffer to Sen. Sherrod Brown (D-Ohio), for another FDIC post. Previous presidents quickly shepherded such recommendations to the Senate, but Trump has yet to formally nominate any of them. He has, however, found time to move ahead with installing a Republican replacement for outgoing Federal Housing Finance Chairman Mel Watt.

In December, Trump picked Vice President Mike Pence’s chief economist Mark Calabria for the job. Calabria is a libertarian true-believer who advocates a return to the gold standard and has called to eliminate Fannie Mae and Freddie Mac, the government-controlled housing giants he would regulate if confirmed as FHFA chairman. Calabria is scheduled for a confirmation hearing before the Senate Banking Committee on Thursday.

Late last month, 20 progressive organizations signed a letter chastising Senate Democrats for inaction on Democratic appointees. By blocking or delaying Republican nominees, the groups wrote, Democrats could pressure Senate Majority Leader Mitch McConnell (R-Ky.) into a deal in which the idle Democratic candidates are approved alongside Republicans ― as was customary in previous administrations.

Some of those progressive groups are now specifically calling for Democrats to block the Calabria nomination by placing a hold on it until other Democratic nominees are allowed to come to the floor.

“It’s time for Senator Schumer and rank-and-file members of his caucus to step up and make sure that these positions are filled as soon as possible,” said David Segal, executive director of Demand Progress, a net-roots group that focuses on contesting corporate power.

It’s time for Senator Schumer and rank-and-file members of his caucus to step up and make sure that these positions are filled as soon as possible.David Segal, Demand Progress

It’s essentially a continuation of last year’s fight between progressives and Schumer over the confirmation of federal judges. At the time, Schumer came under heavy fire for agreeing to confirm large batches of judges by unanimous consent, without securing any Democratic priorities in exchange ― though Schumer (dubiously) argued that letting Democrats go home and campaign without missing votes would help them in the November election. But while Schumer took all of the heat last year, he was acting on behalf of his caucus. Senate Democrats, including several 2020 presidential candidates, we’re happy to avoid a confrontation.

Privately, some Democratic staffers continue to insist they have no power. McConnell has final say over confirmation votes, they argue, and if he wants to bring up only Republican nominees, he can. Fighting, the thinking goes, will inevitably result in losing.

But one aide to a Democratic senator told HuffPost that Calabria’s nomination will not be confirmed by unanimous consent, suggesting that someone ― the aide did not specify who ― will put a hold on the nomination.

It’s true that Democrats can’t force McConnell or Trump to do anything they don’t want to do. But they can create headaches for them, eating up valuable time on the Senate calendar by demanding that every GOP nomination proceeds to a full floor vote. Approving candidates by unanimous consent is faster and leaves the Republican majority with more time to do what it wants to do. McConnell might very well prefer the calendar time to annoying floor fights and bad press from sabotaging the bipartisan nomination process.

Or maybe not. Either way, the current approach from Senate Democrats ― do nothing and hope Republicans do you a solid ― doesn’t seem to be working.