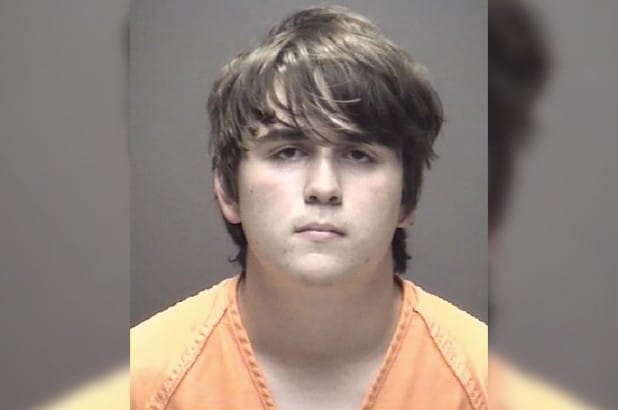 Ten people were killed and 10 others were wounded in a school shooting in Santa Fe, Texas, on Friday morning, according to Gov. Greg Abbott (R).

Law enforcement officials told several news outlets that the one male suspect taken into custody was 17-year old Dimitrios Pagourtzis. Harris County Sheriff Ed Gonzalez confirmed at a Friday morning news conference that another “person of interest” was detained, and one police officer was injured.

Santa Fe High School is still “an active crime scene.” An official confirmed explosive devices were found in the school and the “surrounding areas adjacent to the high school,” urging nearby residents to keep an eye out for suspicious items.

Abbott said Friday afternoon that police were investigating explosive devices, including a Molotov cocktail, at a home and in a vehicle.

The shooter had two weapons, a shotgun and revolver, obtained from his father, who likely had them legally, according to Abbott. He had information on his computer and in journals saying that he wanted to commit the shooting and commit suicide, but “didn’t have the courage” to kill himself, Abbott said.

Earlier Friday, school district officials confirmed on their Facebook page that the school was on lockdown, following reports of an “active shooter.” Santa Fe police told HuffPost that officers were on the scene. Officials at the Bureau of Alcohol, Tobacco and Firearms announced shortly thereafter they were also responding to the situation.

Students were sent to a gym near the elementary and junior high schools, about a mile and a half from the high school, according to the school district.

Three patients with gunshot wounds are at the University of Texas Medical Branch at Galveston, hospital spokesman Raul Reyes said at a news conference. One middle-aged adult male patient is in critical condition in the operating room, while two other patients, including one adult woman and one person under 18, suffered gunshot wounds in the leg. The latter two were in “good condition.”

Santa Fe is located about 25 miles northwest of Galveston and 40 miles southeast of Houston. The high school serves about 1,500 students, according to statistics reported to the U.S. Department of Education.

In February, the same school went on lockdown after reports of shots fired. However, after investigating, the police did not find any evidence, and no one was injured, according to local news reports.

Friday’s shooting was the 16th school shooting so far this year, according to a count by The Washington Post. It was also the 10th since the February massacre at Marjory Stoneman Douglas High School in Parkland, Florida, which left 17 dead and sparked a nationwide conversation about gun violence in America.

Other sources, such as CNN, have even higher tallies for shootings this year, though they use a broader definition of any incident in which a gun was discharged on a school campus.

One of the student survivors in Santa Fe, Paige Curry, said that she was not surprised by Friday’s shooting.

“It’s been happening everywhere,” she told the local ABC affiliate. “I’ve always kind of felt like eventually it was going to happen here too.”

Abbott pledged to work with state legislators to look into solutions to gun violence.

At the White House, President Donald Trump called the shooting “a horrific attack.”

“This has been going on too long. Too many years and decades now,” he said at the White House. “We will be with you forever.”

Earlier Friday morning, Trump and first lady Melania Trump both tweeted their condolences about the shooting.