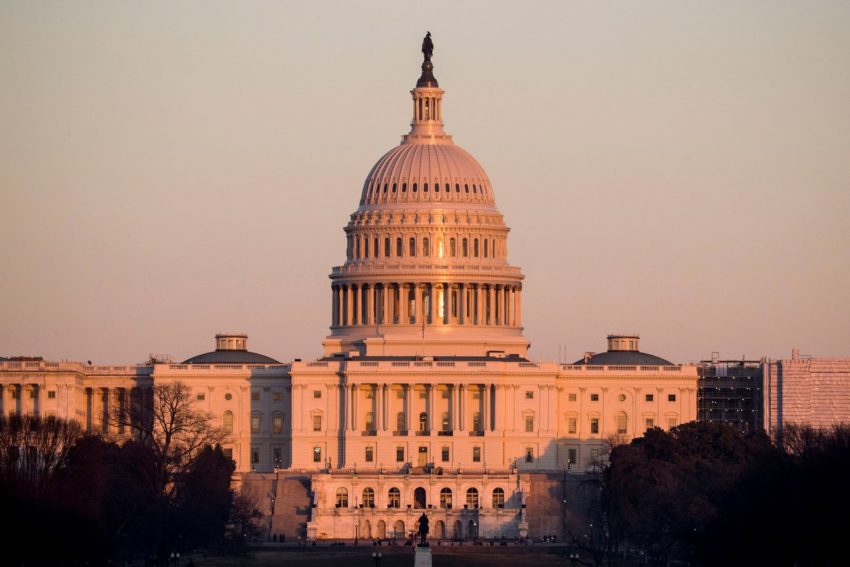 At around 6:30 p.m. on Tuesday, the House of Representatives voted to terminate President Trump’s declaration of a national emergency at the southern border, 245–182. The interesting number within that tally is thirteen: the number of Republicans who broke with Trump to vote yes on the bill. Their votes, strictly speaking, weren’t needed to get the termination through the House, which the Democrats control. The same won’t be true in the Senate, which the Republicans narrowly control and which, under the terms of the law allowing Presidents to declare national emergencies, must now take up the House bill within eighteen days. Mitch McConnell, the Senate Majority Leader, can’t simply push this one aside. The vote will be an open test of the willingness of Republicans to place a limit on this President’s grab for power. Speaking to reporters on Monday, McConnell said that he could not “handicap the outcome” of the vote. “All I can tell you is that it certainly will occur.”

Republicans have fifty-three Senate seats, which means, once Vice-President Mike Pence’s tie-breaking ability is factored in, that four G.O.P. senators would have to vote for the termination. Three have already said that they will: Susan Collins, of Maine; Lisa Murkowski, of Alaska; and Thom Tillis, of North Carolina. They have framed their votes less in terms of opposition to the wall that Trump wants to use the emergency powers to build than to his particular vision, or daydream, of expansive executive powers. Tillis wrote, in an op-ed for the Washington Post on Monday, that “President Trump has few bigger allies than me” when it comes to border security, and that, if he, Tillis, were President, he, too, would “probably declare an emergency.” (Similarly, McConnell said, “You can’t blame the President for trying to use whatever tool he thinks he has”—a statement that, like much of McConnell’s response to Trump, reflects a seamless melding of cynicism and complacency.) As a senator, though, Tillis has “grave concerns when our institution looks the other way at the expense of weakening Congress’s power.” Looking the other way has become a state of being for many in the congressional G.O.P. But the President’s emergency declaration has been such a florid spectacle that even their most practiced contortions haven’t spared them the sight of it.

Congress had, after all, debated how much money to give the President for physical barriers—this was an issue that led to an extended partial shutdown of the government. There was no sudden and unexpected crisis that Congress had no chance to address. The amount of money that congressional leaders came up with, in a deal concluded two weeks ago, was about $1.4 billion. The crisis, for Trump, was that he wanted billions more. Even though Presidents have invoked the National Emergencies Act dozens of times over the years, this application was novel. Senator Joe Manchin, of West Virginia, a Democrat who wants Trump to build the wall, had indicated during the shutdown that he could imagine supporting his use of emergency powers to do so. But, after the budget deal was struck, Manchin told MetroNews, a West Virginia radio station, that he didn’t see how the declaration could be justified “when you got $1.4 billion for the security, building fencing, building a wall.” Trump, he suggested, should wait until he’d built so much that he ran out of money if he ever did. Otherwise, Trump would just be setting a bad precedent. “It opens up Pandora’s box for on and on. I pray to goodness that some of my Republican colleagues will stand up and say, ‘Mr. President, I am not supporting that, I think it is wrong.’ ”

Several Republican senators whom one could imagine voting for the termination, because they have taken positions against executive overreach (Rand Paul, of Kentucky), or because they represent purple states (Cory Gardner, of Colorado), or because they want to be seen as reasonable (Mitt Romney, of Utah), have not yet said how they will vote. (Among the thirteen G.O.P. House members who voted yes were two from Michigan: Justin Amash, who leans libertarian, and Fred Upton, who is regarded as a moderate.) But, even if the House and the Senate to pass the termination, Trump can veto it. Then the much harder question will be whether there is a two-thirds majority in both chambers, the numbers required to overturn a veto. At the moment, there is not.

The vote still matters, though: several state attorneys general have filed a lawsuit challenging Trump’s declaration, with more suits on the way, and one of their arguments has to do with the President’s defiance of Congress’s will. The states’ case will be stronger if Congress makes it will clear. And taking a position against the President would be good practice for congressional Republicans, who have gotten too much into the habit of going along. (One indication of that tendency is that Trump hasn’t yet used his veto; when the Republicans were in control of both chambers, he never had the need.) It might even get some of them in the right state of mind to mount a primary challenge to him.

Many Republicans, though, have argued that not letting Donald Trump use emergency powers would be unfair. “The President has the authority to do it, and we will uphold it,” Kevin McCarthy, of California, the House Minority Leader, said, on Tuesday. Indeed, the Republican position seems to be that Trump has somehow been subject to Presidential discrimination—that, once again, he is the real victim. The Times, in a piece on the new alliance between Trump and Senator Lindsey Graham, of South Carolina, described Graham telling an audience in his home state, “It’s not just about a wall. It’s about him being treated differently than any other President.” (Graham added, according to the Times, “This is a fight between the people who are so smart and the rest of us.”) In this sense, the debate over the emergency is not only about fearmongering (though there has been plenty of that) but about the politics of resentment.

This argument—that all the other Presidents get to do it—was one that several Republican House members repeated in debating the termination. “There are national emergencies still in effect from the Carter Administration,” Robert Woodall, of Georgia, said, and Congress had made no effort “to draw back that power.” Mark Meadows, of North Carolina, sneered at the “newfound constitutionalists across the aisle” who, in his telling, were hypocrites who didn’t care about executive power, just about defeating Trump. Doug Collins, of Georgia, said, “I get it. You don’t like it. But argue with the law.” One problem with that complaint is that the same law that gave the President the power to declare an emergency also gave Congress the power to do something that Graham, McCarthy, and their cohort were airily refusing to do: terminate it.

And, sometimes, it takes a bad President to expose the flaws in a bad law. When all of this is over, Congress should look at the National Emergencies Act and do something about one of its key failures: it leaves it up to the President to define what, exactly, constitutes an emergency. Members of Congress in both parties can, and should, argue with the law. And they can, and should, argue with this President.