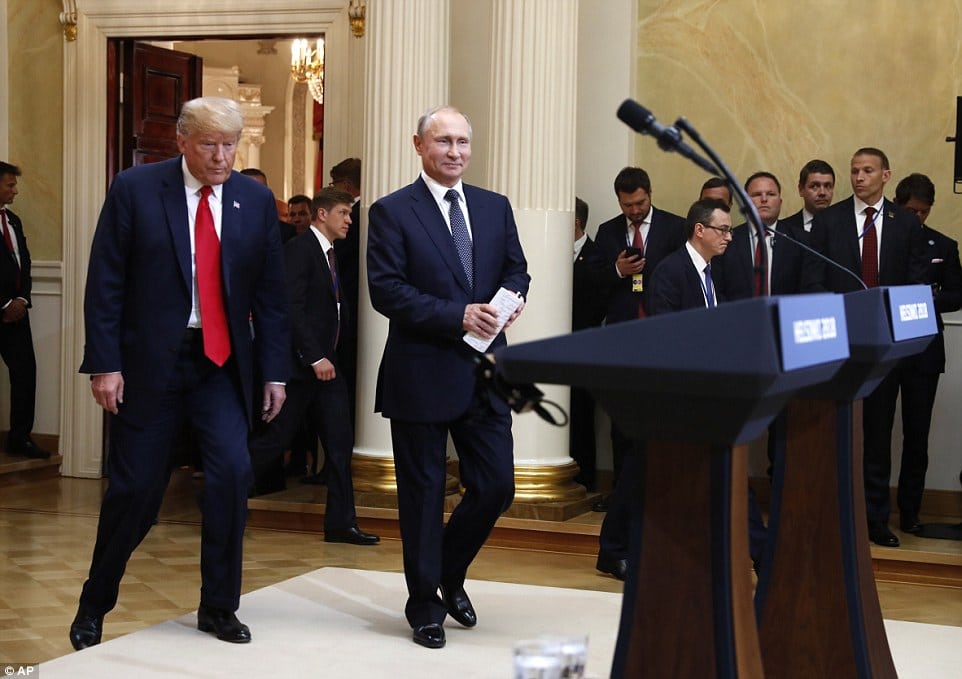 It was perhaps the most explosive exchange in an incendiary press conference: Russian President Vladimir Putin appearing to frankly admit to a motive for, and maybe even to the act of, meddling in the 2016 U.S. presidential election, despite repeatedly denying Russian interference in American politics during the rest of his appearance with Donald Trump in Finland on Monday.But the exchange doesn’t appear in full in the White House’s live-stream or transcript of the press conference, and it’s missing entirely from the Kremlin’s transcript of the event. The White House did not immediately provide an explanation for the discrepancy.

Understanding what Putin said depends on what you watch or where you look. If you watch the video of the news conference provided by the Russian government, or by news outlets such as PBS and the Associated Press, you will hear the Reuters reporter Jeff Mason ask a bombshell of a question: “President Putin, did you want President Trump to win the election and did you direct any of your officials to help him do that?”

Putin then responds with a bombshell of an answer, according to the English translation of his remarks that was broadcast during the press conference: “Yes, I did. Yes, I did. Because he talked about bringing the U.S.-Russia relationship back to normal.”

But recordings of the exchange were muddled for two reasons. First, the English translation of Putin’s previous response was concluding as Mason began to speak. Second, the microphone seemed to pick up Mason’s question halfway through—making the latter half of it easier to hear. (Mason told me that he had held on to the microphone even though an official had tried to pull it away so that he could ask Putin a follow-up question. “I don’t know if they turned the sound off during the time when each of the presidents were speaking, or if it got flipped on and off. I certainly didn’t touch anything.”)Technical difficulties aside, there’s further ambiguity. It’s unclear whether Putin said “Yes, I did” in reference to the question of whether he wanted Trump to win the 2016 presidential race, or in response to the question about whether he directed Russian officials to help Trump win. “You could interpret that to mean he’s answering ‘yes’ to both,” Mason told me, but “looking at it critically, he spent a good chunk of that press conference, just like President Trump did, denying any collusion. So I think it’s likely that when he said ‘Yes, I did,’ that he was just responding to the first part of my question and perhaps didn’t hear the second part.”But if you watch the White House live-stream of the press conference or look at the transcript published by the White House, the first half of Mason’s question is not there. Without it, the meaning of the exchange is substantially different.

Compare this transcript, of what actually happened, to the White House’s version. Here is the record of what took place, starting with the last part of Putin’s comments before Mason’s questions. Putin is describing his willingness to assist with Robert Mueller’s probe (bolding is mine):

Vladimir Putin: That could be a first step, and we can also extend it. Options abound, and they all can be found in an appropriate legal framework.

Jeff Mason: President Putin, did you want President Trump to win the election and did you direct any of your officials to help him do that?

Putin: Yes, I did. Yes, I did. Because he talked about bringing the U.S.–Russia relationship back to normal.

And here’s the key section from the White House transcript, which makes it seem as though Putin is still talking about the Mueller probe:

PRESIDENT PUTIN: That could be a first step, and we can also extend it. Options abound, and they all can be found in an appropriate legal framework.

Q: And did you direct any of your officials to help him do that?

PRESIDENT PUTIN:  Yes, I did. Yes, I did. Because he talked about bringing the U.S.–Russia relationship back to normal.

Transcripts published by the Federal News Service and Bloomberg Government mirror the White House transcript, while NPR’s contains the full exchange. Confusing matters further, C-span’s footage contains Mason’s full question but only the second half of Putin’s answer.
The varying accounts of the same remarks highlight the profound confusion that Donald Trump and Vladimir Putin have generated in the past 24 hours. The discrepancies in the accounts of what was said also underscore the extent to which the Trump presidency has challenged a common understanding of reality. Even if the omission was accidental, it appears suspicious at a moment marked by the president’s repeated claims that legitimate news reports are “fake.”In an attempt to walk back other comments he made at the press conference, Trump said on Tuesday that he believed he had made himself “very clear,” but then changed his mind after reviewing the transcript and footage of the press conference. Referring to his remarks about election meddling, he walked back an extraordinary comment.On Monday, Trump said “I don’t see any reason why it would be” Russia that interfered with the election. On Tuesday, he clarified that he had meant to say: “I don’t see any reason why it wouldn’t be Russia.” One small word, one huge difference.