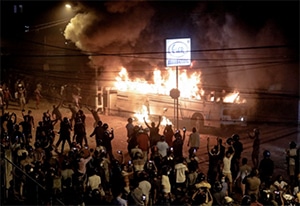 Sri Lanka, which is mired in a deep political and economic crisis, has announced it is suspending payments on its $51bn foreign debt.

The island nation of 22 million people is experiencing acute shortages of food, fuel and other essentials, a crisis that has inflicted widespread misery in the worst downturn since independence from the United Kingdom in 1948.

The South Asian country emerged from a devastating civil war in 2009, only to be rocked by Easter Sunday church bombings in 2019 before being hit hard the following year by the COVID-19 pandemic, which torpedoed its vital tourism sector.

Here is how the crisis has unfolded in recent days:

Police fire tear gas and water cannon, and at least one man is critically injured. The capital is placed under curfew.

The order takes effect at dusk and was to be lifted on the morning of April 4, police say – a period that covers planned mass anti-government protests.

The government briefly blocks access to social media before the ban is lifted following a ruling by the country’s Human Rights Council.

The governor of the central bank, having resisted calls to seek a bailout from the International Monetary Fund (IMF), announces his resignation.

Rajapaksa’s problems deepen as Finance Minister Ali Sabry resigns just a day after he was appointed.

The embattled president loses his parliamentary majority as former allies urge him to quit. He lifts the state of emergency.

Rajapaksa appoints an expert panel to organise a debt restructure as ratings agencies warn of a looming default.

The country’s central bank hikes interest rates by a record 700 basis points in a bid to halt the free fall of the Sri Lankan rupee, which has plunged more than 35 percent in a month.

Tens of thousands march on the beleaguered president’s office in the biggest protest to date, demanding for Rajapaksa to resign.