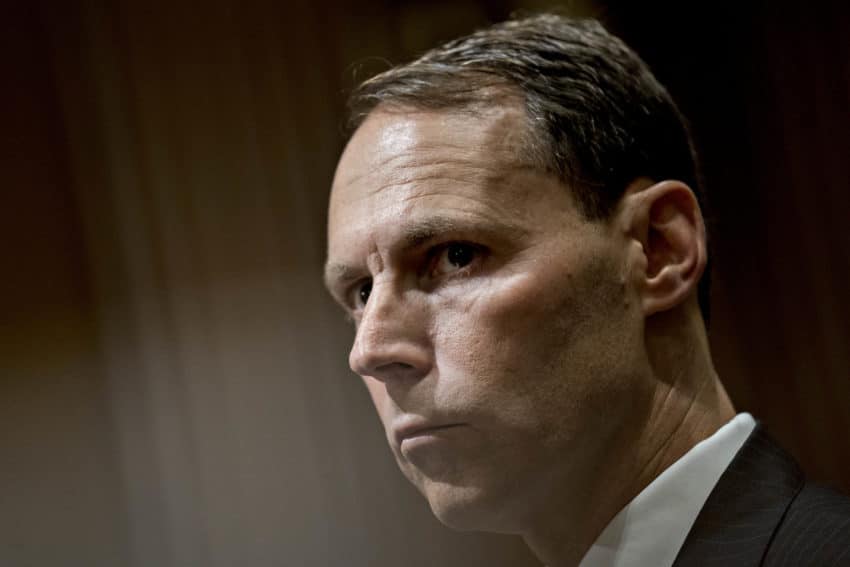 White House aides insisted for months that the confirmation of the nominee, Michael J. Desmond, a tax lawyer from Santa Barbara, Calif., was a top priority after passage of the tax bill in 2017.

But the request by Mr. Trump, made to Mr. McConnell on Feb. 5, raised questions about whether the president had other motivations. For months, the president has seethed over vows by congressional Democrats that they would move to obtain his tax returns from the I.R.S. And this week, the House Ways and Means Committee chairman, Representative Richard E. Neal, Democrat of Massachusetts, formally asked the I.R.S. for six years of the returns, using an obscure provision in the tax code to do so.

On Thursday, asked if he would direct the I.R.S. not to disclose his tax returns, Mr. Trump said Democrats would have to talk to his lawyers.

In July, when Mr. Desmond was first being considered by the Senate Finance Committee, Bloomberg reported that he had briefly advised the Trump Organization on tax issues before Mr. Trump took office. James Wilkinson, a spokesman for Mr. Desmond, told Bloomberg that Mr. Desmond had helped with “a discrete reporting matter for a subsidiary company that was resolved with no tax impact.”

In private practice, Mr. Desmond worked for a time alongside William Nelson and Sheri Dillon, who currently serve as tax counsels to the Trump Organization.

The I.R.S. chief counsel advises the agency director on “all matters pertaining to the interpretation, administration, and enforcement of the Internal Revenue Code, as well as all other legal matters,” according to a description on the agency’s website. The chief counsel reports jointly to the director of the I.R.S. and the Treasury Department’s general counsel.

The Senate did not immediately act on Mr. Trump’s request. It first moved ahead with Mr. Barr’s nomination. Mr. Desmond was confirmed two weeks later, on Feb. 27.

Mr. Trump and his team have been warily anticipating the probing demands of House investigators since Democrats won control in November. The message to Mr. McConnell came around the time that Mr. Trump, eyeing a torrent of new House investigations led by Democrats, told reporters that he was unfairly under fire.

He appeared to take particular umbrage at an inquiry by the House Intelligence Committee focused on potential ties to Russia, as well as accusations of potential money laundering by Mr. Trump’s businesses and his associates.

“It’s called presidential harassment,” he said. “And it’s unfortunate. And it really does hurt our country.”

The president directly relayed his concern about the prompt confirmation of Mr. Desmond to Mr. McConnell around the time that Mr. Trump was preparing to deliver his State of the Union address, the person said.

Hogan Gidley, a White House deputy press secretary, declined to discuss the specifics of the conversation between Mr. Trump and Mr. McConnell.

“Democrats have obstructed and delayed a record number of President Trump’s well-qualified nominees, so it shouldn’t be surprising to anyone that he regularly communicates with Majority Leader McConnell about how to increase confirmations in the face of Democrats’ ridiculous behavior,” Mr. Gidley said.

But according to a person familiar with what took place, Mr. Trump told Mr. McConnell that Mr. Desmond was growing frustrated with the holdup and was contemplating withdrawing from the process.

Democrats in the House are relying on a little-known provision of the federal tax code to try to view Mr. Trump’s personal and business tax returns. The provision, added in the 1920s, gives the chairmen of Congress’s tax-writing committees — including the Democrat-led Ways and Means Committee in the House — authorities to request information on any filer to review privately.

The text of the law does not give the Trump administration clear grounds to deny a request from Mr. Neal, saying only that when requested, the Treasury secretary “shall” furnish the information. But Treasury Department officials are making preparations to challenge any requests coming from Mr. Neal. They would most likely argue that his action is politically motivated, not related to real matters of policy and therefore illegitimate.

Mr. Trump asked on Wednesday about the request by reporters during an Oval Office event, maintained that he was still being audited, a claim he has made for years to defend not releasing his tax returns, as previous presidents have done.

A version of this article appears in print on April 4, 2019, on Page B5 of the New York edition with the headline: Trump Asked Senator to Prioritize Vote on I.R.S. Nominee.