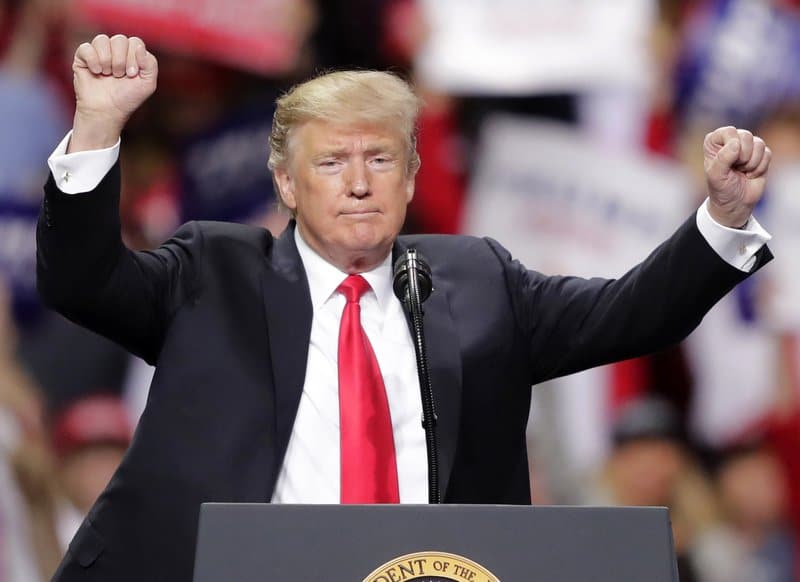 President Donald Trump; his children Donald Jr., Eric and Ivanka; and his business are suing two banks to block them from turning over financial records to congressional committees that have issued subpoenas for the information. It’s the second attempt in court that Trump has made this month to thwart the Democratic-led House of Representatives from investigating his financial history.

The legal action, filed in New York’s Southern District, is against Deutsche Bank, one of Trump’s lenders, and Capital One. Both banks “have long provided business and personal banking services to Plaintiffs,” Trump’s attorneys said.
“The subpoenas were issued to harass President Donald J. Trump, to rummage through every aspect of his personal finances, his businesses, and the private information of the President and his family, and to ferret about for any material that might be used to cause him political damage. No grounds exist to establish any purpose other than a political one,” Trump’s attorneys wrote in the complaint filed late Monday.
The lawsuit is the latest salvo by the President in efforts to hold off Democratic scrutiny of his business and personal finances, and is similar in legal strategy to actions brought last week against an accounting firm and a congressional chairman.
But Monday’s lawsuit had a slight difference from the suit last week, in that neither the House itself nor House members are being sued. The other lawsuit, in federal court in Washington against the accounting firm Mazars USA and the House Oversight Committee, is also attempting to prevent the House from getting Trump’s financial records.
The lawsuit in New York claims that the subpoenas the House Intelligence Committee and House Financial Services Committee sent to Deutsche Bank and Capital One aren’t valid because they violate banking privacy law and they are not for shaping legislation. Yet at least one other court has said previously that claims like those can’t stop congressional subpoenas.
In this new case, Trump’s team says it couldn’t get access to details of the subpoenas through the House committees and instead learned about them through Deutsche Bank on April 17.
Trump’s attorneys say the chairs of the House Intelligence and Financial Services committees — Reps. Adam Schiff and Maxine Waters, both of whom are California Democrats — confirmed two banks received subpoenas from their committees for information related to Trump’s finances but have refused to provide copies of the subpoenas.
The banks described the subpoenas to Trump’s attorneys, according the lawsuit.
Based on those conversations, Trump’s attorneys claim that the committees are seeking all banking and financial records “not just concerning the individual Plaintiffs, but also their own family members,” including children and in some cases grandchildren, according to the lawsuit.
Trump’s attorneys — Will Consovoy, Patrick Strawbridge and Marc Mukasey — said the lawsuit is meant to protect Trump, his family and his business.
“The subpoenas issued to Deutsche Bank and Capital One by Chairpersons Schiff and Waters are unlawful and illegitimate,” the statement read. “They seek information going back decades from anyone with even a tangential connection to the President, including children, minors and spouses. Every citizen should be concerned about this sweeping, lawless, invasion of privacy. We look forward to vindicating our clients’ rights in this matter.”
Deutsche Bank said in a statement it will comply with all subpoenas and court orders.
“We remain committed to providing appropriate information to all authorized investigations and will abide by a court order regarding such investigations,” the statement read.
Last week, CNN reported that the bank was complying with a subpoena from New York Attorney General Letitia James for documents related to loans made to Trump and his business. The bank is in the process of turning over documents, including emails and loan documents, related to Trump International Hotel in Washington, DC; the Trump National Doral Miami; the Trump International Hotel and Tower in Chicago; and the unsuccessful effort to buy the NFL’s Buffalo Bills.
CNN has reached out to Capital One for comment.
In a statement, Waters and Schiff called the lawsuit “meritless.”
“This lawsuit is not designed to succeed; it is only designed to put off meaningful accountability as long as possible,” Waters and Schiff said. “Trump has already said publicly that he is fighting all of the subpoenas from Congress, and that he does not respect Congress’ role as a coequal branch of government. This unprecedented stonewalling will not work, and the American people deserve better.”
CNN reported the committees issued joint subpoenas for the records early this month. Although the full scope of the subpoenas couldn’t be determined, the one to Deutsche Bank is for information about loans the bank made to Trump and the Trump Organization, a person familiar with the matter told CNN.
By declining to provide the copies of the subpoenas to Trump’s legal team, the Democrat-led committees are preventing the President and his team “from even knowing, let alone negotiating, the subpoenas’ scope or breadth,” according to the complaint.
The lawsuit comes one week after Trump sued the Chairman Elijah Cummings, of the House Oversight and Government Reform Committee, over his panel’s subpoena to an accounting firm that prepared several years’ worth of Trump’s financial statements.
The congressional lawsuits are more evidence that Trump is making good on his promise to aggressively fight or stall Democratic investigations into his personal finances and business. Last week, the Treasury Department missed a deadline to turn over six years of the President’s tax returns to the House Ways and Means Committee.