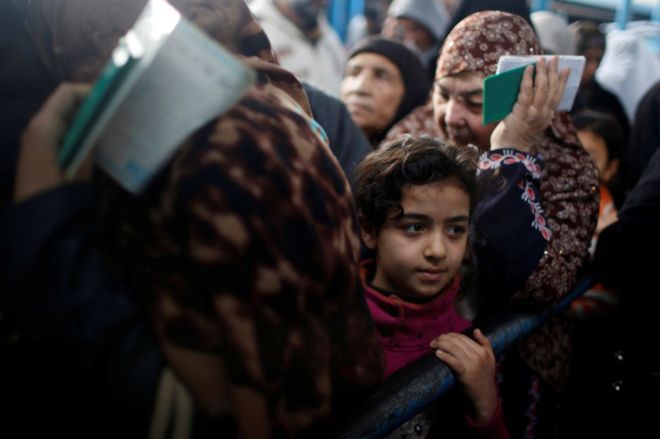 The US is withholding more than half of a $125m (£90m) instalment destined for the UN relief agency for the Palestinians, American officials say.

It will provide $60m in aid to the UN Relief and Works Agency (UNRWA) but will hold back a further $65m.

A UN official said the move would have devastating consequences for hundreds of thousands of vulnerable people.

The US funds almost 30% of the UN agency’s work overall and gave $370m to UNRWA last year. The money withheld is part of this year’s first instalment.

On Sunday, Palestinian President Mahmoud Abbas sharply attacked Mr Trump’s Middle East peace efforts, saying he would not accept any peace plan from the US after it recognised Jerusalem last year as Israel’s capital.

He accused Israel of putting an end to the 1994 Oslo Accords, which began the peace process.

Why is the aid being suspended?

“This is not aimed at punishing” anyone, state department spokeswoman Heather Nauert told reporters, adding that it was due to a US desire to see reforms at the agency.

The $65m is being withheld “for future consideration”, a US official told Reuters news agency, speaking on condition of anonymity.

“It is time other countries, some of them quite wealthy, step in and do their part to advance regional security and stability,” the official added.

The decision comes two weeks after President Trump’s complaint that America receives “no appreciation or respect” in return for its aid.