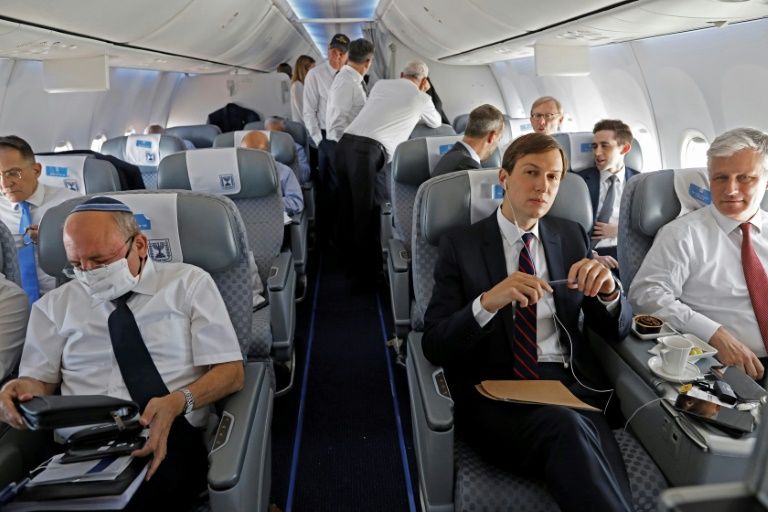 A US-Israeli delegation led by White House advisor Jared Kushner arrived Monday in Abu Dhabi, on the historic first commercial flight from Tel Aviv to mark the normalisation of ties between the Jewish state and the UAE.

In another breakthrough, regional heavyweight Saudi Arabia allowed the flight to cross its airspace, halving what would otherwise have been a long trip around the Arabian peninsula.

“This is the first time this has ever happened. I would like to thank the Kingdom of Saudi Arabia for making that possible,” Kushner, US President Donald Trump’s son-in-law, said on arrival in Abu Dhabi.

The word “peace” was written in Arabic, English and Hebrew on the cockpit of the El Al flight that landed in the Emirates capital, where US flags flew alongside the Star of David banner.

The landmark direct flight by Israel’s national carrier, numbered LY971 in a nod to the UAE’s international dialling code, is due to return on Tuesday with the number 972, matching Israel’s dialling code.

“While this is a historic flight, we hope that it will start an even more historic journey in the Middle East and beyond,” Kushner, a key architect of Trump’s Middle East policy, said before boarding.

“The future does not have to be predetermined by the past. This is a very hopeful time.”

Kushner urged the Palestinians, who have condemned the UAE deal as a betrayal of their cause, to come to the negotiating table.

“When they are ready, the whole region is very excited to help lift them up and move them forward. But they can’t be stuck in the past, they have to come to the table,” he said.

The accord was announced by Trump on August 13, making the UAE the first Gulf country and only the third Arab nation to establish relations with Israel.

Unlike Egypt, which made peace with its former battlefield enemy in 1979, and Jordan, which followed in 1994, the UAE has never fought a war with Israel.

Gulf Arab nations have had increasingly publicly ties with Israel in recent years, boosted by their shared rivalry with Iran and the advantages of linking their powerful economies.

Saudi Arabia, in keeping with decades of policy by most Arab nations, says it will not normalise ties until Israel has signed a peace deal establishing an independent Palestinian state.

But the overflight was a concrete sign of Saudi cooperation with Israel after years of behind-the-scenes overtures.

The plane however skirted the Gulf states of Qatar and Bahrain, who have declined so far to follow the UAE’s move, also met with criticism elsewhere in the Arab world.

“Peace is not an empty word used to normalise crimes and oppression,” Saeb Erekat, secretary general of the Palestine Liberation Organisation, said Monday.

“Peace is the outcome of justice. Peace is not made by denying Palestine’s right to exist.”

The talks in Abu Dhabi aim to boost cooperation between the two regional economic powerhouses in areas including aviation, tourism, trade, health, energy and security.

The visit is also expected to include a meeting between Kushner and Israeli and Emirati national security advisors Meir Ben-Shabbat and Sheikh Tahnoun bin Zayed.

Ben-Shabbat, who was also on the flight to the UAE, said the delegation’s goal was to make a plan to push ahead relations in a broad range of areas.

“We came here to transform a vision into a reality. There are no limits to cooperation… in education, innovation, health, aviation, agriculture, energy and many other fields,” he said in Abu Dhabi.

Since the agreement between the UAE and Israel was unveiled, there have been phone calls between their ministers, and on Saturday the Emirates in a new milestone repealed a 1972 law boycotting Israel.

Israeli Prime Minister Benjamin Netanyahu, speaking alongside Kushner in Jerusalem on Sunday, praised “the swift pace of normalisation” between his country and the UAE.

“You will see how the sparks fly on this. It’s already happening,” he said, predicting that “today’s breakthroughs will become tomorrow’s norms. It will pave the way for other countries to normalise their ties with Israel.”

“There are many more unpublicised meetings with Arab and Muslim leaders to normalise relations with the State of Israel,” Netanyahu said, without naming any countries.

As part of the normalisation agreement, Israel agreed to suspend its planned annexations in the occupied West Bank, although Netanyahu quickly insisted the plans remained on the table in the long run.

The Israeli leader has also denied reports that the accord hinges on the sale of US F-35 stealth fighter jets to the UAE, saying he opposes a move that could reduce Israel’s strategic edge in the region.

Kushner said Monday that the US could maintain that edge “while also advancing our military relationship with the United Arab Emirates” and that the issue would be discussed further in “coming weeks and months”.