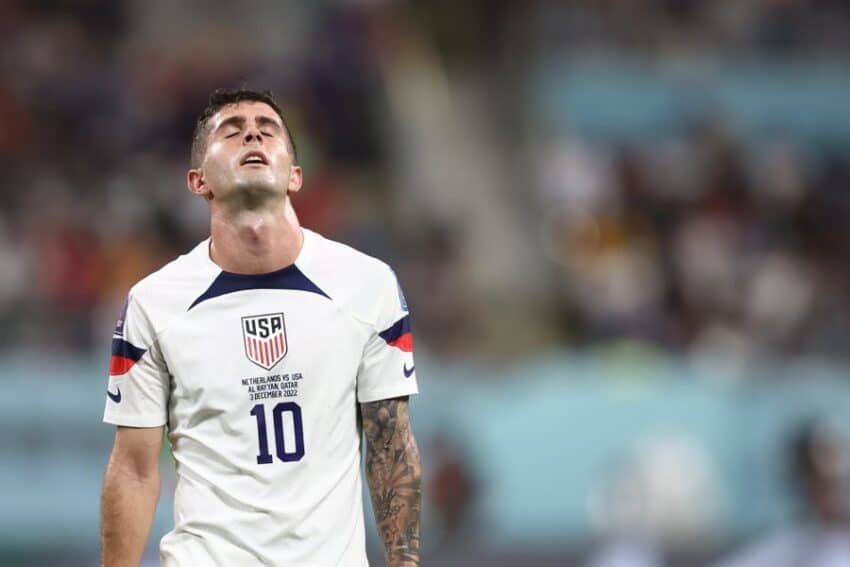 Memphis Depay and Daley Blind scored in the first half and Denzel Dumfries added a late goal as the Netherlands eliminated the United States from the World Cup with a 3-1 victory Saturday that advanced the Dutch to the quarterfinals.

Second-half substitute Haji Wright cut the U.S. deficit to 2-1 in the 76th minute when Christian Pulisic’s cross hit his trailing foot and popped over goalkeeper Andries Noppert and into the net. But Dumfries, who assisted on the first two goals, scored on a volley in the 81st.

“When you play a team with so much quality like that and you give them three, four chances, they’re going to put three or four away,” United States captain Tyler Adams said. “We can show that we can hang with some of the best teams in the world, some of the best players in world, and that’s a lot of progress for U.S. soccer. We’re moving in the right direction, for sure, but we need to keep pushing, because we’re not there yet. But we’re close.”

Runners-up in 1974, 1978 and 2010, the Oranje extended their unbeaten streak to 19 games and face Argentina or Australia on Friday.

It was a disappointing end for a rebuilt U.S. team hoping to advance past the round of 16 for the first time since 2002. Using the second-youngest squad in the tournament, the Americans achieved the bare minimum to consider the World Cup a success, beating Iran in their group-stage finale to reach the knockout round.

“I think we made some progress,” United States coach Gregg Berhalter said. “When people look at our team, they see a clear identity. They see guys that go out and fight for each other. They see the talent on the field. We made progress, but on this particular night we came up short.”

Pulisic, playing four days after getting hurt during his game-winning goal against Iran, had a chance to put the United States ahead in the third minute but Noppert, playing in only his fourth international match, blocked his point-blank shot. With the Americans seeking an equalizing goal, Noppert dived to stop Tim Weah’s 25-yard effort in the 42nd.

The crowd of 44,846 was well back from the field at renovated Khalifa International Stadium, which has an athletics track and was more subdued than the raucous spectators for the match against Iran.

While the United States had the better play at the start, the Dutch went ahead after breaking the American press. Dumfries one-timed a pass from the right flank as Depay streaked unmarked into the penalty area. His right-footed shot from 14 yards beat goalkeeper Matt Turner to the far post in the 10th minute for his 43rd international goal, moving him into sole possession of second place on the Dutch career scoring list behind Robin van Persie’s 50.

The goal was the first allowed by the United States from the run of play in the tournament. In 37 World Cup matches, the Americans have never won a game in which they trailed.

The Netherlands doubled the lead on virtually the final kick of the first half, in the first minute of stoppage time. After a quick series of exchanges following a throw-in, Dumfries got a cross around Tyler Adams and found Blind wide open at the penalty spot. Blind scored only his third international goal — his first in eight years. Gio Reyna fed an open Weston McKennie in the 54th, but he skied his shot over the crossbar.

Wright entered in the 67th and scored his second international goal, sparking U.S. hopes. But Dumfries was left unmarked by Tim Ream and Antonee Robinson and used his left foot to volley Blind’s cross.

“Just looking around that locker room, the silence is deafening,” Turner said. “We all want to create moments for people back at home to fall in love with the game and tonight was not one of those nights, unfortunately.”

YOUNG AND THE RESTLESS

The starting lineup for the United States was its youngest for a World Cup knockout match at 25 years, 86 days. The previous low was 27 years, 19 days for the 1930 semifinal loss to Argentina.

United States forward Josh Sargent did not dress after injuring his right ankle against Iran.

The Netherlands will next play Friday at Lusail Stadium, the site of this year’s final.

The Americans begin the 2026 cycle with a match against Serbia on Jan. 25 in Los Angeles and face Colombia three days later in Carson, California. The games are not on FIFA dates, meaning mostly Major League Soccer players will be used.