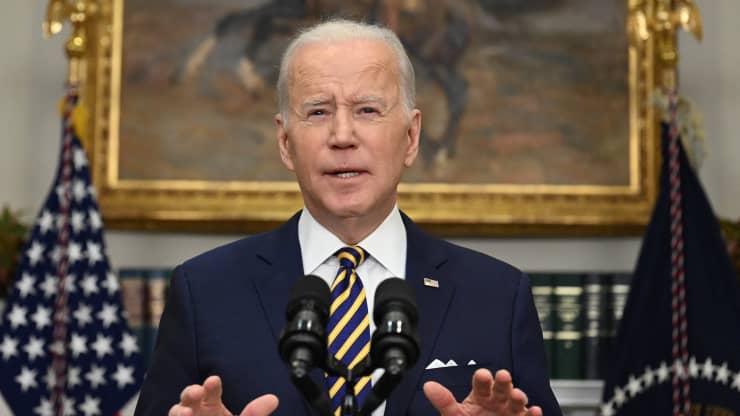 President Joe Biden on Tuesday announced that the U.S. will ban imports of Russian oil, a major escalation in the international response to Moscow’s invasion of Ukraine.

The move came as Western-allied nations work to sever Moscow from the global economy to punish Russian President Vladimir Putin for his unprovoked aggression.

“Today I am announcing the United States is targeting the main artery of Russia’s economy. We’re banning all imports of Russian oil and gas and energy,” Biden said at the White House. “That means Russian oil will no longer be acceptable at U.S. ports and the American people will deal another powerful blow to Putin’s war machine.”

“This is a step we’re taking to inflict further pain on Putin,” Biden said.

The United Kingdom announced its own restrictions on buying Russian oil imports just before Biden spoke, saying it will phase out the country’s imports by the end of the year. The European Union earlier Tuesday morning unveiled a plan to wean itself off of Russian fossil fuels.

“We simply cannot rely on a supplier who explicitly threatens us,” European Commission President Ursula von der Leyen said in a press release announcing the plan.

The U.S. imported about 672,000 barrels a day from Russia in 2021, according to figures from the Energy Information Administration. That amount comprises roughly 8% of the total U.S. imports of oil and refined products.

Most of the country’s crude oil and petroleum imports come from Canada, Mexico and Saudi Arabia, making the U.S. far less dependent on Russian oil than many of its European partners.

The news of the ban, confirmed to CNBC by two people familiar with the matter prior to Biden’s speech, sent oil markets soaring Tuesday morning.

The price on West Texas Intermediate crude futures, contracts for April oil deliveries, hit $129.44 a barrel. That level is just below a recent high of $130.50 a barrel hit on March 7, which at the time was the highest price on oil futures since 2008.

Putin’s actions have provoked an unprecedented international reaction, as dozens of countries slap crippling sanctions on the Kremlin, its ultra-rich oligarchs and even Putin himself. Russia’s currency has plummeted in value and its stock market has closed, while a growing list of companies have pulled their business out of the country.

That includes businesses such as Shell, which vowed to immediately stop all purchases of Russian crude and shutter its service stations in the country.

In the U.S., Biden has faced calls to target Russian oil, the nation’s main export. But with gas prices soaring on fears of supply shortages stemming from Russia’s war, the U.S. president has so far resisted those calls.

U.S. gas prices touched all-time highs following news of the ban on Russian oil imports. The national average for a gallon of regular gas rose to a record $4.173 on Tuesday, according to AAA. The prior record was $4.114 from July 2008, not adjusted for inflation.

In Tuesday’s speech, Biden acknowledged that the new ban will make prices worse. “With this action, it’s going to go up further,” he said, warning companies against exploiting the situation by hiking prices.

“Russia’s aggression has cost us all, and it’s no time for profiteering or price gouging,” the president said.