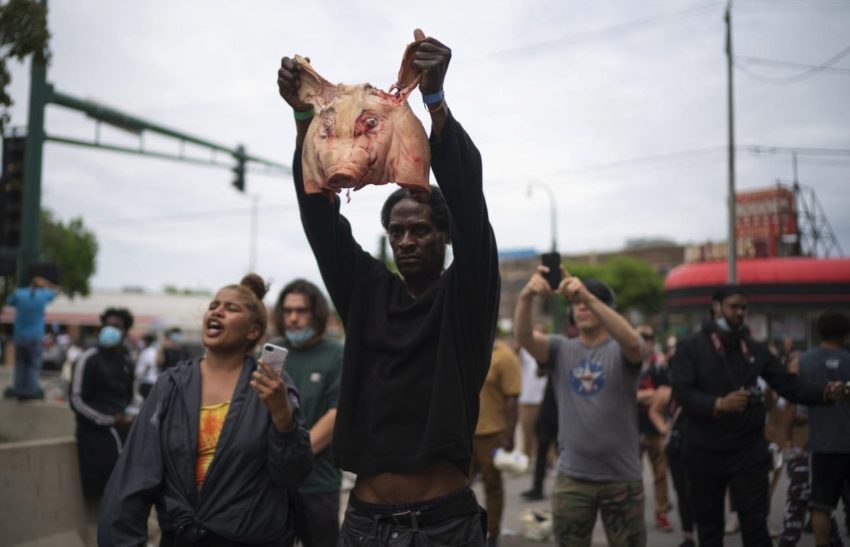 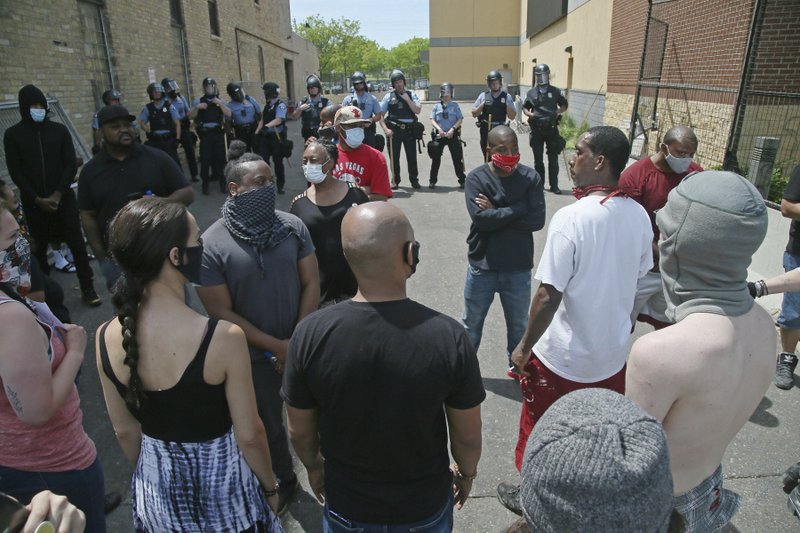 Protesters face off with police at the Minneapolis Police Third Precinctt, Thursday, May 28, 2020, after a night of rioting as protests continue over the arrest of George Floyd who died in police custody Monday night in Minneapolis after video shared online by a bystander showed a white officer kneeling on his neck during his arrest as he pleaded that he couldn’t breathe. (AP Photo/Jim Mone)

MINNEAPOLIS (AP) — Minnesota Gov. Tim Walz called in the National Guard on Thursday as looting broke out in St. Paul and a wounded Minneapolis braced for more violence after rioting over the death of a handcuffed black man in police custody reduced parts of one neighborhood to a smoking shambles.

The Minneapolis unrest ravaged several blocks in the Longfellow neighborhood, with scattered rioting reaching for miles across the city. It was the second consecutive night of violent protests following the death of George Floyd, who gasped for breath during a Monday arrest in which an officer kneeled on his neck for almost eight minutes. In footage recorded by a bystander, Floyd can be heard pleading that he can’t breathe until he slowly stops talking and moving.

Another protest was announced for Thursday evening near county offices in downtown Minneapolis. Some stores in Minneapolis and the suburbs closed early, fearing more strife. The city shut down its light-rail system and planned to stop all bus service out of safety concerns. 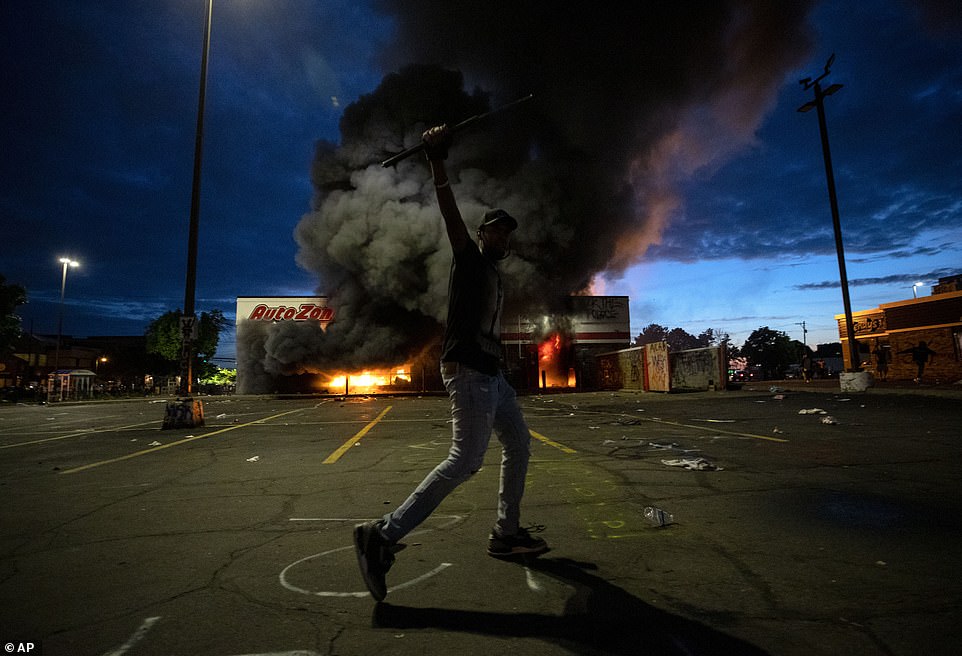 Around midday Thursday, the violence spread a few miles away to a Target in St. Paul’s Midway neighborhood, where police said 50 to 60 people rushed the store attempting to loot it. Police and state patrol squad cars later blocked the entrance, but the looting then shifted to shops along nearby University Avenue, one of St. Paul’s main commercial corridors, and other spots in the city. 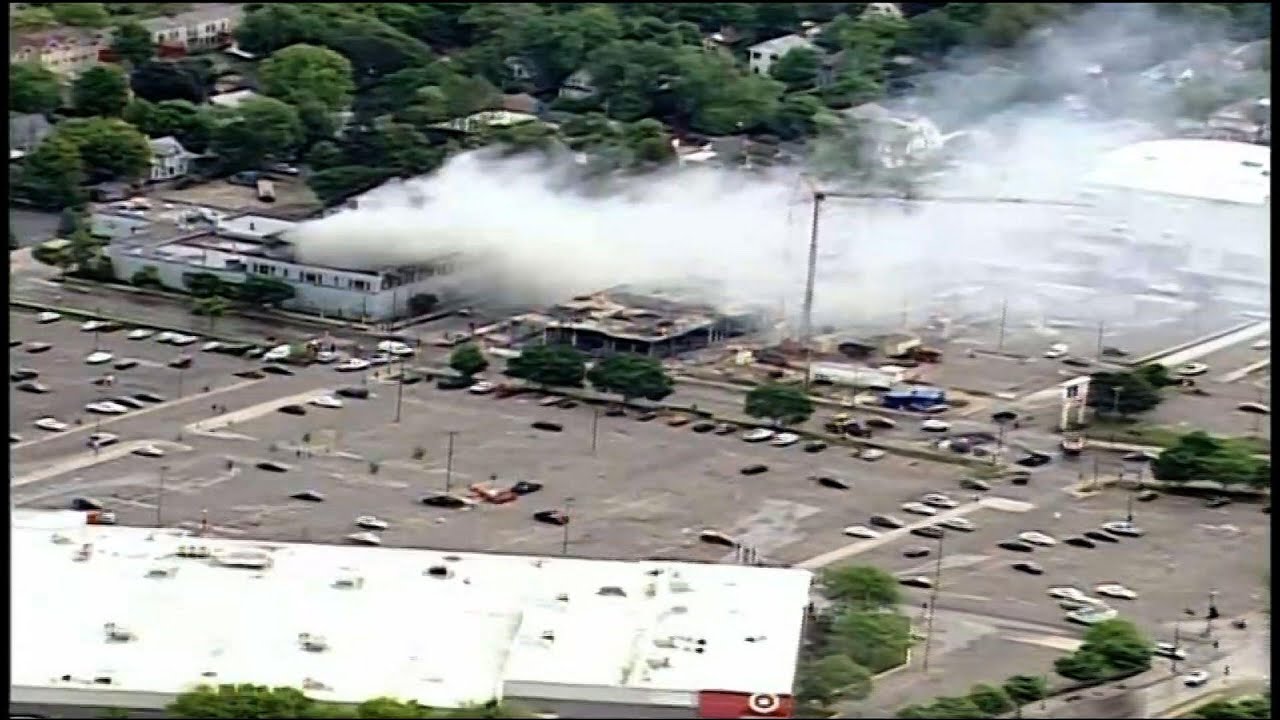 St. Paul spokesman Steve Linders said authorities have been dealing with unrest in roughly 20 different areas throughout the city.

“Please stay home. Please do not come here to protest. Please keep the focus on George Floyd, on advancing our movement and on preventing this from ever happening again. We can all be in that fight together,” St. Paul Mayor Melvin Carter tweeted.

Walz called for widespread changes in the wake of Floyd’s death.

“It is time to rebuild. Rebuild the city, rebuild our justice system, and rebuild the relationship between law enforcement and those they’re charged to protect. George Floyd’s death should lead to justice and systemic change, not more death and destruction,” Walz said.

By Thursday morning in Minneapolis, smoke rose from smoldering buildings in the Longfellow neighborhood, scene of the worst violence. In a strip mall across the street from the police’s 3rd Precinct station, the focus of the previous night’s protests, the windows in nearly every business had been smashed, from the large Target department store at one end to the Planet Fitness gym at the other. Only the 24-hour laundromat appeared to have escaped unscathed.

“WHY US?” demanded a large expanse of red graffiti scrawled on the wall of the Target. A Wendy’s restaurant across the street was charred almost beyond recognition.

“We’re burning our own neighborhood,” said a distraught Deona Brown, a 24-year-old woman standing with a friend outside the precinct station, where a small group of protesters were shouting at a dozen or so stone-faced police officers in riot gear. “This is where we live, where we shop, and they destroyed it.”

“What that cop did was wrong, but I’m scared now,” Brown said.

But others in the crowd saw something different in the wreckage.

Protesters destroyed property “because the system is broken,” said a young man who identified himself only by his nickname, Cash, and who said he had been in the streets during the violence. He dismissed the idea that the destruction would hurt residents of the largely black neighborhood.

“They’re making money off of us,” he said angrily of the owners of the destroyed stores. He laughed when asked if he had joined in the looting or violence: “I didn’t break anything.”

The protests that began Wednesday night and extended into Thursday were more violent than Tuesday’s, which included skirmishes between offices and protesters but no widespread property damage or looting.

Protests also spread to other U.S. cities. In California, hundreds of people protesting Floyd’s death blocked a Los Angeles freeway and shattered windows of California Highway Patrol cruisers. Memphis police blocked a main thoroughfare after a racially mixed group of protesters gathered outside a police precinct. The situation intensified later in the night, with police donning riot gear and protesters standing shoulder-to-shoulder in front of officers stationed behind a barricade.

Amid the violence in Minneapolis, a man was found fatally shot Wednesday night near a pawn shop, possibly by the owner, authorities said.

Fire crews responded to about 30 intentionally set blazes during the protests, including at least 16 structure fires, and multiple fire trucks were damaged by rocks and other projectiles, the fire department said. No one was hurt by the blazes.

Across from the precinct, someone had spray-painted the sidewalk in red: “Where’s humanity?”

The 46-year-old Floyd died as police arrested him outside a convenience store after a report of a counterfeit bill being passed. The U.S. Attorney’s Office and the FBI in Minneapolis said Thursday they were conducting “a robust criminal investigation” into the death and making the case a priority. The announcement came a day after President Donald Trump tweeted that he had asked an investigation to be expedited.

The FBI is also investigating, with a probe focused on whether Floyd’s civil rights were violated.

The officer who kneeled on Floyd and three others were fired Tuesday. The next day, the mayor called for him to be criminally charged.

Frey appealed to Gov. Tim Walz to activate the National Guard, a spokesman confirmed Thursday. The governor’s office did not immediately respond to a request for comment. Walz tweeted for calm Wednesday night, calling the violence “an extremely dangerous situation” and urging people to leave the scene.

The last time the Minnesota National Guard was called out to deal with civil unrest was in a backup role during the 2008 Republican National Convention in St. Paul. The most comparable situation to the current disturbances happened when the Guard was called up to deal with the riots in Minneapolis in 1967, a summer when anger over racial inequalities came to a boil in many cities across the country.

The Minnesota National Guard was also called out during protests against the Vietnam War in the 1960s and early 1970s and during a 1986 strike by Hormel meatpackers in Austin.

Associated Press writers Steve Karnowski and Jeff Baenen in Minneapolis, and Gretchen Ehlke in Milwaukee, contributed to this report.