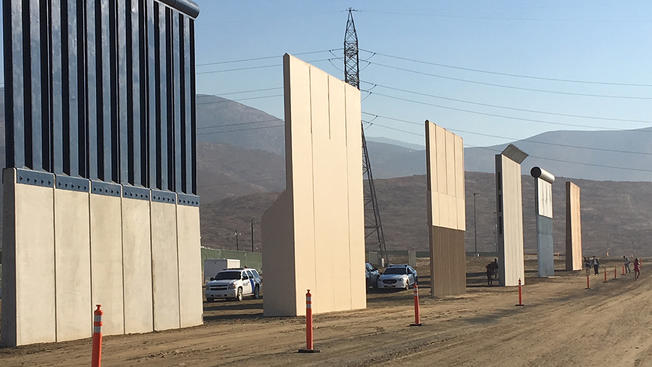 The White House suggested Tuesday that President Donald Trump could back down from his demand for $5 billion to fund his proposed border wall in a year-end spending bill.

Trump’s push for the money has threatened a partial government shutdown when funding for seven agencies lapses after midnight Friday. Last week, the president said he would be “proud” to close parts of the government over border security.

“We have other ways that we can get to that $5 billion that we’ll work with Congress,” White House press secretary Sarah Huckabee Sanders told Fox News on Tuesday morning. She added that the Trump administration could support $1.6 billion in border security funding proposed by Democrats, as long as it can “couple that with other funding resources” to get to $5 billion.

She added that “at the end of the day, we don’t want to shut down the government. We want to shut down the border.” Senate Minority Leader Chuck Schumer and House Minority Leader Nancy Pelosi have cast the potential lapse in funding as the “Trump shutdown.” When Pelosi goaded Trump into an Oval Office fracas last week, the characterization appeared to irritate the president.

Sanders’ comments mark a de-escalation in the White House’s rhetoric on the proposed barrier on the U.S.-Mexico border. Trump has repeatedly threatened to force a shutdown if he cannot secure money for the wall. As a candidate, he promised to force Mexico to fund the barrier.

Still, Trump himself has not weighed in Tuesday on how much money he would accept. As always, comment or tweet from the president could trample on the message administration officials try to send.

Trump has also claimed his administration has built large portions of the wall. But Congress has only authorized money to build fencing similar to existing structures. The president has also contended that the military could build the wall — through the Pentagon has said it has no plans to do so, yet.

The president has already signed spending bills for five government agencies, including the massive Departments of Defense and Health and Human Services, into law. Lawmakers still have not funded five agencies. Trump’s push for wall money as part of the Department of Homeland Security funding has snagged talks to dodge a shutdown.

Schumer said Tuesday morning that he and Pelosi had not heard from the White House on two offers it made to avoid a shutdown. They floated two different plans to Trump last week. One includes appropriations bills for six agencies and a year-long continuing resolution to fund DHS. The other would pass a continuing resolution to keep all seven departments running.

As only about a quarter of the government would shut down this weekend, it would have only limited effects. Along with Homeland Security, the unfunded agencies are the departments of Transportation, Commerce, Interior, Agriculture, Housing and Urban Development and Justice.

While some functions like national parks would close down, some employees and law enforcement officers at those agencies would continue working without getting paid temporarily. Those would include employees such as FBI, border patrol and Transportation Security Administration agents.