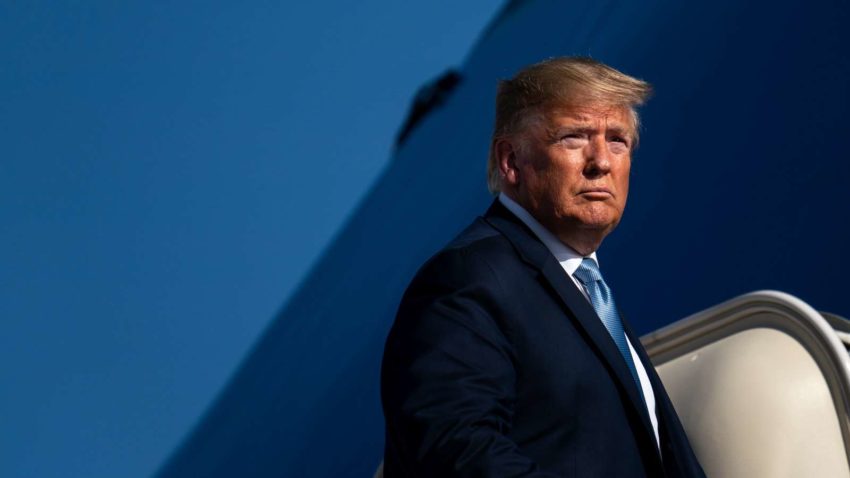 A potentially explosive complaint by a whistle-blower in the intelligence community said to involve President Trump was related to a series of actions that go beyond any single discussion with a foreign leader, according to interviews on Thursday.

The complaint was related to multiple acts, Michael Atkinson, the inspector general for American spy agencies, told lawmakers during a private briefing, two officials familiar with it said. But he declined to discuss specifics, including whether the complaint involved the president, according to committee members.

The complaint cleared an initial hurdle when Mr. Atkinson deemed it credible and began to pursue an investigation. But it has prompted a standoff between lawmakers and the acting director of national intelligence, Joseph Maguire, who has refused to turn it over to Congress, as is generally required by law. It has become the latest in a series of fights over information between the Democratic-led House and the White House.

Democrats emerged from Mr. Atkinson’s briefing and renewed their accusation that the Trump administration was orchestrating a cover-up of an urgent and legitimate whistle-blower complaint that could affect national security.

Representative Adam B. Schiff, Democrat of California and the chairman of the House Intelligence Committee, told reporters after the briefing that he still did not know the contents of the complaint and had been unable to get an answer to whether the White House was involved in suppressing it.

“I don’t think this is a problem of the law,” he said. “I think the law is written very clearly. I think the law is just fine. The problem lies elsewhere. And we’re determined to do everything we can to determine what this urgent concern is, to make sure that the national security is protected and to make sure that this whistle-blower is protected.”

Mr. Schiff said he would explore potential recourse with the House’s general counsel to try to force the release of the complaint, including potentially suing for it in court.

And while Mr. Trump may have discussed intelligence activities with the foreign leader, he enjoys broad power as president to declassify intelligence secrets, order the intelligence community to act and otherwise direct the conduct of foreign policy as he sees fit, legal experts said.

Mr. Trump regularly speaks with foreign leaders and often takes a freewheeling approach. Some current and former officials said that what an intelligence official took to be a troubling commitment could have been an innocuous comment. But there has long been concern among some in the intelligence agencies that the information they share with the president is being politicized.

Andrew P. Bakaj, a former C.I.A. and Pentagon official whose legal practice specializes in whistle-blower and security clearance issues, confirmed that he is representing the official who filed the complaint. Mr. Bakaj declined to identify his client or to comment.

Mr. Trump denied wrongdoing on Thursday, explaining that he would not “say something inappropriate” on calls where aides and intelligence officials from both sides routinely listen in.

Mr. Schiff has been locked in the standoff with Mr. Maguire over the complaint for nearly a week. He said Mr. Maguire told him that he had been instructed not to give the complaint to Congress, and that the complaint addressed privileged information — meaning the president or people close to him were involved.

Mr. Schiff has said that none of the previous directors of national intelligence, a position created in 2004, had ever refused to provide a whistle-blower complaint to Congress. The House Intelligence Committee issued a subpoena last week to compel Mr. Maguire to appear before the panel. He briefly refused but relented on Wednesday, and is now scheduled to appear before the committee in an open hearing next week.

Senator Mark Warner of Virginia, the top Democrat on the Senate intelligence panel, said on Thursday that he and the committee’s Republican chairman, Senator Richard Burr of North Carolina, also expected both the inspector general and acting director to brief them early next week and “clear this issue up.”

Mr. Maguire and Mr. Atkinson are at odds over how the complaint should be handled. Mr. Atkinson has indicated the matter should be investigated, and alerted the House and Senate Intelligence committees, while Mr. Maguire, the acting director of national intelligence, says the complaint does not fall within the agencies’ purview because it does not involve a member of the intelligence community — a network of 17 agencies that does not include the White House.

[Read a pairof letters from the Office of the Director of National Intelligence about the complaint.]

The inspector general of the intelligence community “determined that this complaint is both credible and urgent, and that it should be transmitted to Congress under the clear letter of the law,” Mr. Schiff, Democrat of California, said in a statement on Wednesday evening.

Senator Angus King, an independent who caucuses with the Democrats, said the law is “very clear” that the whistle-blower complaint must be handed over to Congress.

“The Inspector General determines what level of concern it is,” said Mr. King, a member of the Senate Intelligence Committee. “Once the determination is made,” he added, the director of national intelligence “has a ministerial responsibility to share that with Congress. It is not discretionary.”

“This is based upon the principle of separation of powers and Congress’s oversight responsibility,” Mr. King said.

Mr. Maguire was named the acting director in August, after the president had announced that the previous director of national intelligence, Dan Coats, would be stepping down. Mr. Trump had planned to nominate Representative John Ratcliffe, Republican of Texas, a Trump loyalist without an extensive background in intelligence. But the president dropped the plan after lawmakers from both parties raised concerns about Mr. Ratcliffe’s qualifications and possible exaggerations on his resume.

The reports about the whistle-blower complaint touched off speculation about what Mr. Trump said and to whom.

In the weeks before the complaint was filed, Mr. Trump spoke with President Vladimir V. Putin of Russia, Prime Minister Imran Khan of Pakistan and the prime minister of the Netherlands, Mark Rutte.

And current and former intelligence officials have expressed surprise that during his first few months as president, Mr. Trump shared classified information provided by an ally, Israel, with the Russian foreign minister.

Such disclosures are not illegal, but Mr. Trump flouted intelligence-sharing decorum by sharing an ally’s intelligence without express permission.

Mr. King expressed some doubt about how serious the underlying complaint might be.

“I am a little concerned it is being overblown,” Mr. King said. “On the other hand, it may be significant. But we won’t know that for a few days.”