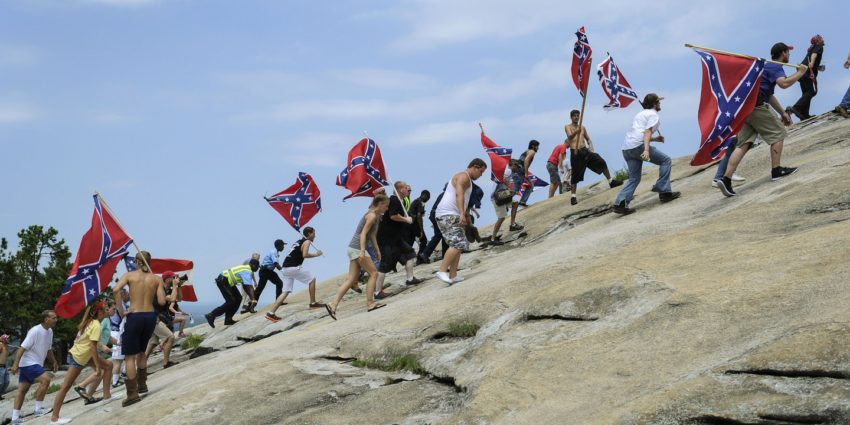 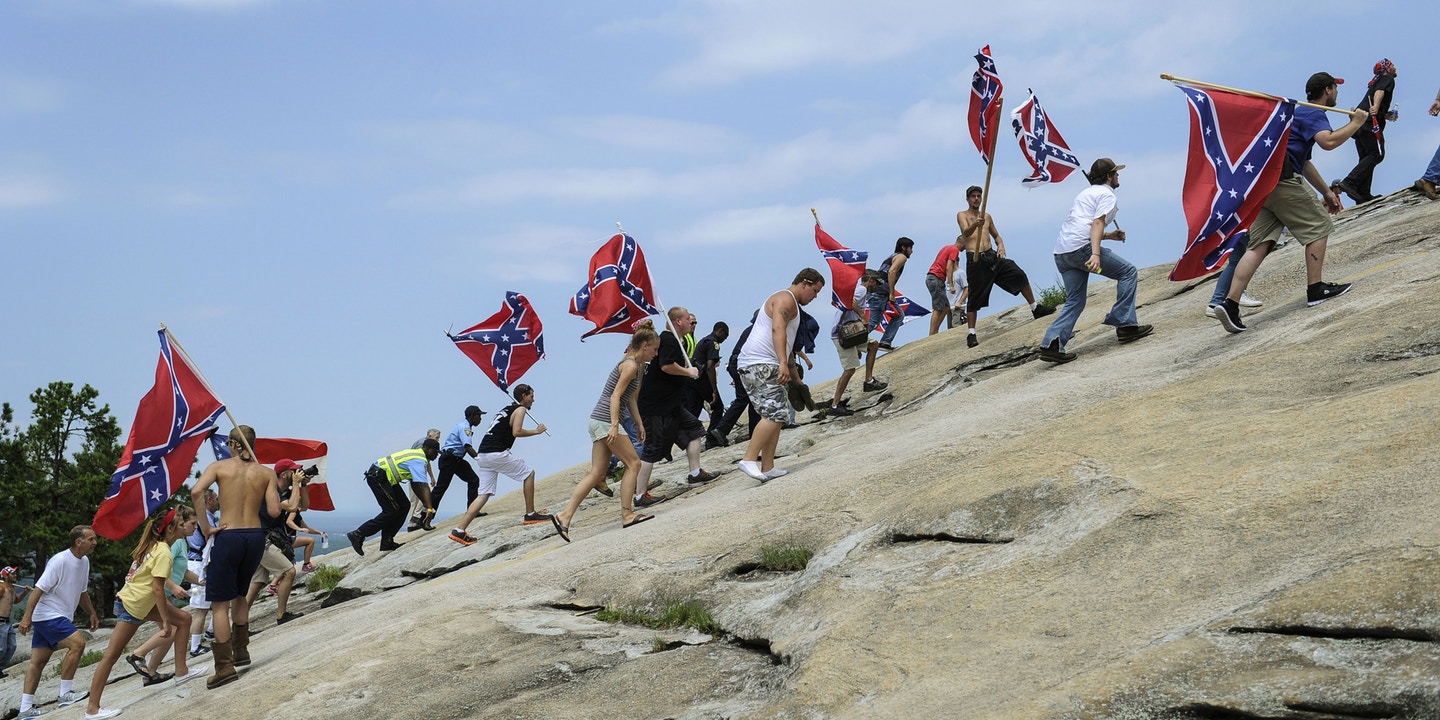 White supremacists spent months organizing a rally at the birthplace of the modern Klu Klux Klan, just 20 miles from Atlanta, to coincide with Super Bowl Sunday. But just days from the scheduled event, their plans completely fell apart after the organizers got cold feet.

The intended location, Stone Mountain, Georgia, has long been a popular destination for the far-right extremist set, not only because of its historical significance to the KKK but also because the entire park is a memorial to the Confederacy. The park also features the “Confederate Memorial Carving,” 400 feet high with a three-acre expanse, of Confederate figures carved into the face of the mountain.

Greg Calhoun, a known member of the KKK, and John Estes, a convicted felon and white supremacist, organized the event, “Rock Stone Mountain II,” planned for Saturday, as a sequel to a 2016 rally that drew only a handful of far-right extremists waving Confederate flags, plus hundreds of counter-protesters, who clashed with police for hours. As they faced several logistical hurdles in the planning process, other notable far-right and alt-right personalities started to join the cause, including Michael Carothers, once named “activist of the year” by the neo-Nazi group the National Alliance.

After weeks of insisting the rally would go off without a hitch, Carothers posted Thursday on his personal blog, “White Information Network,” that after he consulted legal advisers, the event would not be held as planned.

Now Antifa, which had planned to counter the rally, has declared victory. Rather than facing off against white supremacists waving Confederate flags, a coalition of 50 anti-fascist groups under the banner F.L.O.W.E.R., or the Frontline Organization Working To End Racism, had planned to march to Stone Mountain on Saturday in celebration.

“We encourage the whole community to show up and celebrate this victory,” according to a statement from the group. “Flower power beats fascist power!”

According to a Facebook event page removed a little over a week ago, the goal of “Rock the Mountain II” was to capitalize on the international media attention coming to Atlanta with the Super Bowl and to protect Stone Mountain.

“The NAACP is using the media storm to attempt to raise funding to remove the beautiful carving from Stone Mountain,” the event’s Facebook page read. The NAACP has called for its removal but is not fundraising to have the monument sandblasted away, as is rumored in far-right circles.

“This is a Resistance to Communism rally to call attention to the attempt by the Marxist left to remove the landmarks of Our People,” the page continued.

“This is a Resistance to Communism rally to call attention to the attempt by the Marxist left to remove the landmarks of Our People.”

Since a white teen shot and killed nine black church members in North Carolina in 2015, more than 100 Confederate monuments — deemed ugly testaments to white supremacy — have been taken down from public parks and squares across the country. Stone Mountain, specifically, has weathered its fair share of scrutiny over the years.

During the midterm elections, Democratic candidate for Georgia governor Stacey Abrams called the park a “blight” on her state and demanded its removal. But that would pose a significant logistical challenge, given that the Confederate figures are etched 42-feet deep into the mountain.

Ku Klux Klan members and the League of the South — a neo-Confederate group whose members were tied to the violent acts in Charlottesville, Virginia, in 2017 — said they were interested in attending the event. On Nov. 11, the event’s Facebook page was edited to include a drawing of Confederate troops firing on an unseen enemy, with the caption “Aiming for Antifa on February 2nd, #RockStoneMountain.”

To hold a rally at Stone Mountain, however, the organizers needed to obtain a permit from the Stone Mountain Memorial Association, which oversees the park. Without a permit, law enforcement could arrest attendees on charges of parading without a permit if the event turned violent.

THE BEGINNING OF THE END

Both Calhoun and Estes were behind the last Rock Stone Mountain “white power rally,” in April 2016. In their application this year, they called the event a “non-partisan gathering,” according to the Atlanta Journal-Constitution. Last November, however, the association rejected the organizers’ application for a permit because the rally would present “a clear and present danger” to public safety, according to a letter officials sent.

Still, Carothers said just last week the rally was going ahead as planned — with or without the permit. “To hell with their permit,” he told the Atlanta Journal-Constitution. “The Constitution is our permit.”

Carothers, who also goes by the name “Michael Weavers,” was added as an admin to the Rock Stone Mountain Facebook page last November. He also hosted a video conference last November to promote the event with Charles Edward Lincoln III, a disbarred ex-lawyer and ardent Confederist, and Sidney Horton aka “Avialae Horton” or “Based Southern Belle, ” a 21-year-old alt-right activist who claims to dabble in poetry and modeling. Both Lincoln and Horton were instrumental in organizing “Unite the Right 2” held in Washington, D.C., last August, one year after the violent Unite the Right rally in Charlottesville.

Now, their plans have completely collapsed.

“WE HAD A LOT OF SUPPORT”

Carothers finally conceded in a post on his blog Tuesday that no permit meant no rally. “Not having a permit will increase the chance of liability for anyone attending the event,” he wrote and added that the organizers planned to “pursue legal measures to obtain our permit which was unconstitutionally denied.”

Carothers also pointed to the risk of rally attendees being “attacked by younger, deranged, and possibly drug-fueled basement-dwelling ‘revolutionaries.’”

“Atlanta Antifascists,” a local anti-racist organization, had closely tracked the event and vowed a robust counterprotest. As well as publicizing any developments in the planning, the group also put up posters around Hapeville, Georgia — where the head honcho of the event, Estes, lived — that called him a neo-Nazi, with his photo and home address.

And then Estes appeared to back out earlier this week. In a video posted online on Wednesday, he said he’s being undermined by “people who were meant to be on my side.” Rather than participate in the rally, Estes said he thinks the way forward in the future is “leaderless resistance” and “guerilla warfare.”

“Short of me showing up by myself, there’s no hope of an ‘event’,” Estes said. “But of course, a lot of people stated they were coming. We had a lot of support — a lot of support.”

Another supporter of the rally, Horton or “Based Southern Belle,” also tore into Estes and other organizers for “surrendering,” in a video call posted to Facebook. “I think that we can’t afford to adopt a demeanor of defeatism and the idea that all was lost because it’s not,” Horton said. “Everything we hold dear is contingent upon our actions, and we voluntarily relinquish the victory into the hands of the enemy out of fear, or intimidation, or doubt.”

The Stone Mountain Memorial Association is “aware of the situation and has plans in place,” public information officer John Bankhead told VICE News in an email. But he declined to elaborate further and added that the association was planning to release a statement Friday afternoon.

Cover image: In this Aug. 1, 2015 file photo, Confederate flag supporters climb Stone Mountain to protest of what they believe is an attack on their Southern heritage during a rally at Stone Mountain Park in Stone Mountain, Georgia. (AP Photo/John Amis, File)