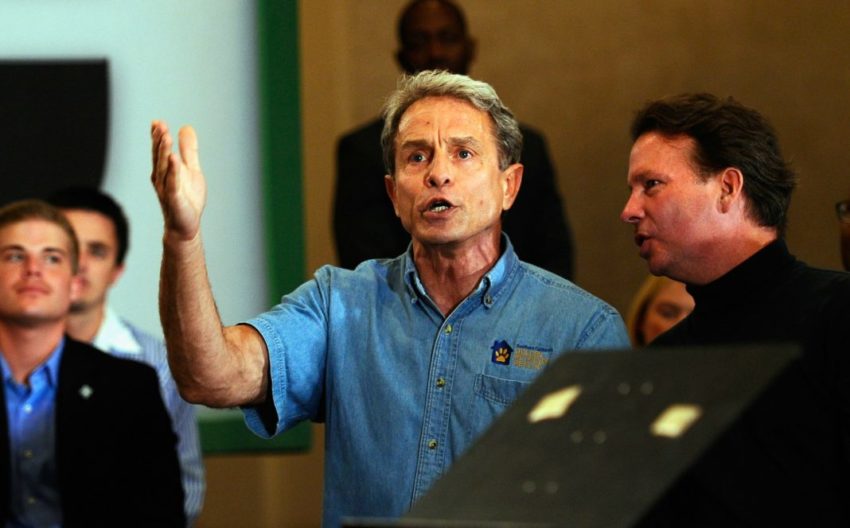 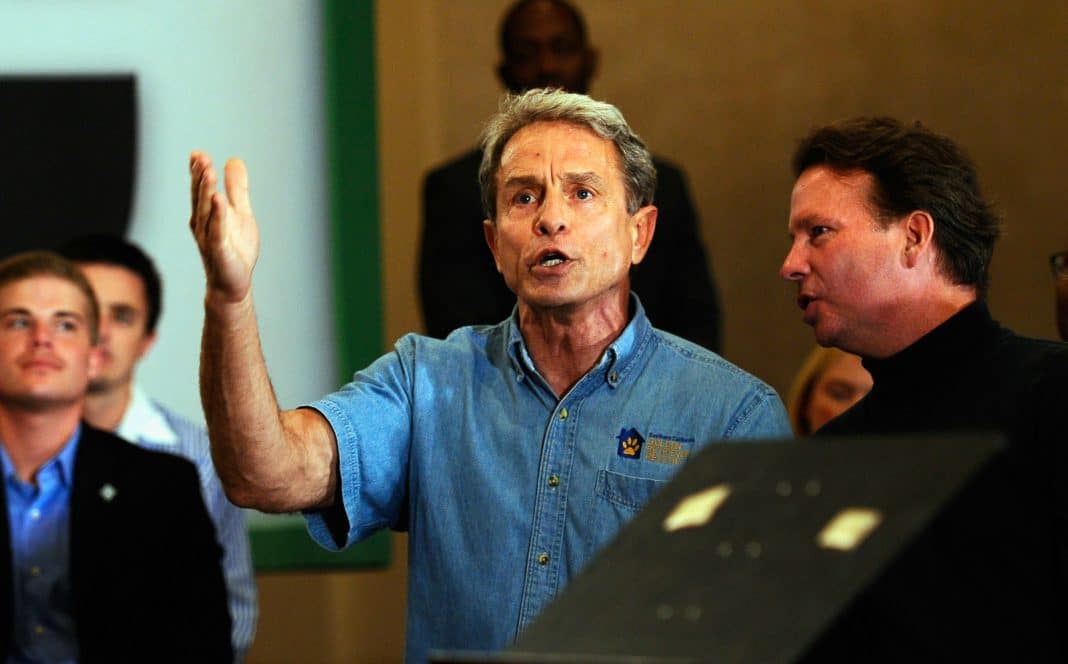 In 2010, then-California gubernatorial candidate Meg Whitman was holding a political rally at a Hollywood hotel when from the front row a man started heckling her.“What are you hiding?” the man shouted at the Republican candidate. “You’re looking like Arnold in a dress!” he said, referring to outgoing Gov. Arnold Schwarzenegger. Before Whitman could respond, then-New Jersey Gov. Chris Christie, who was speaking with Whitman, stepped down from the stage and pointed his finger in the man’s face, saying it was “people who raise their voices and yell and scream like you that are dividing this country.” The man pointed his finger right back in Christie’s face. For many people watching the episode on television, it was a first glimpse, however brief, of Ed Buck, a former fashion model, self-described retired multimillionaire and onetime West Hollywood City Council candidate.

Now, Buck is generating notoriety of a different kind after the deaths of two men in his West Hollywood apartment. The deaths of Timothy Dean, 55, earlier this month and Gemmel Moore, 26, in 2017 have prompted homicide investigations by the Los Angeles County Sheriff’s Department. Prosecutors declined to press charges in the first case, but the Sheriff’s Department said recently it would be reexamined after Dean’s death. The deaths have stoked outrage and suspicion among activists and the men’s family and friends, who question whether differences in race, wealth and political connections have influenced the investigations. Both of the dead men were black. Buck is white. Buck’s attorney, Seymour Amster, said his client was a man with a “heart of gold” who invited troubled people into his home to help them. Buck is not responsible for the deaths, he said. Buck, 64, has long been a contentious figure in West Hollywood, where he was best known for his animal rights and LGBTQ activism and his donations to Democratic politicians and causes. He was an enigma to those who knew him — a man who bragged about his wealth while living in a barely furnished apartment. He fostered elderly dogs but was known to criticize strangers over how they walked their pets.

The son of a city sanitation worker and a secretary, Buck grew up in Phoenix. His mother once told a reporter that when Buck was in high school, “the dean of boys had a hotline to my phone at work. I’d answer the phone and say, ‘All right, what is it this time?’ ”In his early 20s, Buck worked as a fashion model and actor in Europe for several years before returning, jobless, to Arizona. He worked for a friend’s business, an information service for auto insurers, and became obsessed with it. He slept on a mattress in the company office and eventually bought out his friend. He later sold the business for what he said was a “million-dollar profit,” according to the Arizona Republic, and was suddenly wealthy, retired and bored at 32.Buck became a nationally known figure in the late 1980s when he led the successful effort to impeach Arizona Gov. Evan Mecham. Buck, who then described himself as a conservative Republican, set up shop in a downtown Phoenix office, where he hung a piñata effigy of the governor, seeded the recall movement with $5,000 of his own money and turned it into a full-time job. Upon learning Buck is gay, Mecham declared him a “militant homosexual.” Buck responded: “He’s right. So what?”

During the recall effort, it was made public that Buck was arrested in 1983 for public sexual indecency for grabbing the crotch of another man in a bookstore. Buck pleaded guilty to disturbing the peace and cracked to reporters: “What they didn’t say was that the man enjoyed it.”When Buck threatened to launch a recall effort against both of Arizona’s senators, Democrat Dennis DeConcini and Republican John McCain, over the Keating Five corruption scandal, he printed fake $10 bills with their pictures and the words “illegal tender for favoritism.” The Secret Service seized them, saying they too closely resembled real currency. Buck eventually made his way to Southern California, where, court records show, he has been the subject of several requests for restraining orders. Records from three cases from 2007 that involved Buck were destroyed by the Los Angeles Superior Court. In another case for which records still exist, a 2002 request for a temporary restraining order against Buck, James de Jarnette, a Los Angeles psychotherapist, wrote that Buck came to his home for an evaluation, spoke about having narcolepsy and “seemed to want amphetamines.”When De Jarnette said he could not prescribe medication, Buck “told me what a sorry human I am,” De Jarnette wrote. Buck called him back hours later and said, “You will feel my pain; I’m on my way over,” according to court records and a police report.De Jarnette alleged that Buck hung fliers all over his apartment building, telling residents to protect themselves because De Jarnette invited “dangerous people” to his home as part of his practice.De Jarnette’s petition was dismissed after a hearing. De Jarnette could not be reached for comment.In court papers responding to De Jarnette’s claims, Buck wrote: “He may be afraid, but it’s only the truth he has to fear.”

In 2007, Buck unsuccessfully ran for West Hollywood City Council as part of the Save West Hollywood campaign slate, a group of candidates who pledged to stop mega-development and “take down the ‘For Sale’ sign at City Hall.”Steve Martin, a former councilman who ran on the slate, said Buck was known for his animal rights activism, especially on behalf of golden retrievers. He was a leading force behind the city’s 2011 decision to ban the sale of fur apparel. But Buck constantly got in people’s faces, Martin said. Buck would see people walking their dogs and say they were doing it wrong or that they had their dog on the wrong diet.“It was like Ed was the expert and he knew best,” Martin said. Allegra Allison, a longtime West Hollywood resident, helped Buck with his City Council campaign, which he ran out of his apartment. She described him as “an in-your-face activist” who was “very intense.”“He had almost no furniture, and he rented furniture for the campaign,” she said. “It’s two small bedrooms, and the living room was basically empty.”Ashlee Marie Preston, a transgender activist, and writer, said she met Buck through the Stonewall Democratic Club, an LGBTQ political group, where she was the chair for special events.

In 2017, Gemmel Moore died of a methamphetamine overdose in Buck’s home, where, according to a Los Angeles County coroner’s report, investigators found “multiple sex toys, multiple syringes and clear plastic bags with suspected methamphetamine in a toolbox roll-cabinet in the living room.”Moore had been homeless and had worked as an escort. The Times reviewed pages of a journal that authorities said was found among Moore’s possessions. In it, Moore purportedly wrote in 2016 about using crystal methamphetamine.“I’ve become addicted to drugs and the worst one at that,” the journal said. “Ed Buck is the one to thank, he gave me my first injection of Chrystal [sic] meth.”In 2017, The Times interviewed a young black man who asked that his name not be used because he worked as an escort. The man said he reported complaints about Buck, similar to those made in the journal, to the West Hollywood sheriff’s station three weeks before Moore died. The man showed The Times communications with Buck and photographs of him and Buck inside an apartment. Nana Gyamfi, an attorney representing the man, and a sheriff’s detective confirmed the man provided the same information to investigators looking into Moore’s death. The man said he went to Buck’s apartment on July 3, 2017, and Buck took photos of him then asked if he wanted something to drink. Buck, he said, gave him a glass of water that made him feel a tingling sensation.“The next thing I know, I’m waking up from taking a deep breath,” the man said. “My arms are immediately hurting, and I’m tied down to the couch. Just my arm. My arm was hurting.”He said he went to the sheriff’s station afterward but that authorities told him he was tweaking and needed to leave.Amster says he does not know whether Buck does illicit drugs and that “what he does of a consensual nature I really am not privy to or care about.”The Los Angeles County district attorney’s office last summer declined to file charges in Moore’s death, citing insufficient admissible evidence. A charge evaluation sheet cited an inadmissible search and seizure but did not elaborate. Buck was present for both deaths, authorities said.On Jan. 7, Timothy Dean, of West Hollywood, died in Buck’s apartment. A cause of death has not been released, but Amster said Dean died of an apparent overdose after ingesting a substance at another location. Law enforcement officials have put a security hold on Dean’s autopsy.

The deaths have drawn scores of protesters to Buck’s home. At one protest, Moore’s mother, Latisha Nixon, said Buck “is preying on black men.”Jasmyne Cannick, a political consultant who organized the protests, has accused Buck of luring vulnerable black men to his apartment for sexual gratification.Capt. Chris Bergner of the sheriff’s homicide bureau said all the materials from the probe into Moore’s death are being reexamined as part of the investigation into Dean’s death.Activists have questioned whether Buck’s donations to elected officials have protected him from arrest and charges. Since 2009, Buck has donated more than $520,000 for local, state and federal campaigns. He has donated to each of the current West Hollywood City Council members except Councilwoman Lindsey Horvath.Last week, Horvath was on hand for a candlelight vigil for Moore and Dean outside Buck’s apartment. She said she had asked Sheriff Alex Villanueva for extra patrols near the apartment.

Amster said race had been unfairly used to blame Buck for the deaths and that Black Lives Matter activists were targeting his client “because they are looking for a political victory.”“Some people still want us to have a race war,” Amster said. “Some people want to look at things as black, white or brown. It’s not. If we want to move forward and get away from identifying individuals by race, we must take race out of the conversation.”Amster said Buck was not as wealthy as he had been portrayed in the media. Buck, he said, has helped “hundreds of people.”“They’ve been homeless; he’s helped them get a job. … He’s helped them get out of drugs,” Amster said. “When they have nobody else to turn to, they turn to him. He’s given them a place to sleep, which is one of the problems, and unfortunately, they bring their problems into his residence and he gets blamed for their situations.”Amster added: “He did have friends in the elected community, which I don’t think exist anymore. There were electeds that liked him. That’s over.”