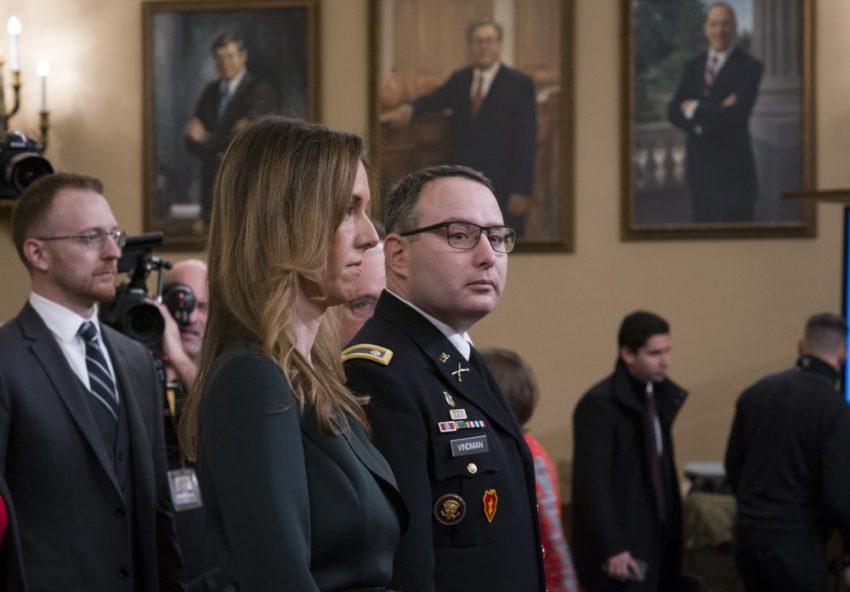 One top national security aide who listened to President Donald Trump’s July call with Ukraine’s president called it “improper.” Another said it was “unusual.” The two testified Tuesday at House impeachment hearings as the inquiry reached deeper into the White House.

Lt. Col. Alexander Vindman, an Army officer at the National Security Council, and Jennifer Williams, his counterpart at Vice President Mike Pence’s office, said they both had concerns as Trump spoke with the newly elected Ukrainian president about political investigations into Democrat Joe Biden.

“What I heard was inappropriate,” Vindman told lawmakers. He said it would be seen as a “partisan play.”

The two led off a pivotal week featuring testimony from nine witnesses as the House’s impeachment inquiry accelerates. Democrats say Trump’s pressure on Ukraine to investigate Democrat Joe Biden while withholding U.S. military aid that Ukraine needed to resist Russian aggression may be grounds for removing the 45th president.

Trump says he did no such thing in his call with President Volodymyr Zelenskiy and the Democrats just want him gone.

Vindman, a 20-year military officer arrived at Capitol Hill in military blue with a chest full of service medals, and said he reported his concerns “out of a sense of duty.”

He did so, he said, “because they had significant national security implications for our country.”

Williams, a career State Department official who has worked for three presidential administrations and counts former Secretary of State Condoleezza Rice a “personal hero,” said the Trump phone call was the first time she had heard anyone specifically seeking investigations from Ukraine.

The reference to Biden and his son Hunter “struck me as political in nature.”

Vindman, an immigrant who arrived in the U.S. as a toddler from Ukraine, told the panel he was grateful for “the privilege of being an American citizen and public servant, where I can live free of fear for mine and my family’s safety.”

In the audience was his twin brother, also an official at the National Security Council and among those he told about his concerns over Trump’s phone call.

Addressing his father, Vindman said, “Do not worry, I will be fine for telling the truth.”

Gaveling open the second week of live televised hearings, the Democratic Intelligence Committee chairman leading the probe, Rep. Adam Schiff, noted that Trump tweeted against Williams over the weekend and Vindman has seen “far more scurrilous attacks” on his character by the president’s allies.

Schiff, who has warned that the president’s attacks on others in the impeachment inquiry could be seen as intimidation, said the witnesses “are here because they were subpoenaed to appear, not because they are for or against impeachment. That question is for Congress.”

The top Republican on the committee, Rep. David Nunes, swiftly turned to trying to prompt the witnesses to name the still-anonymous whistleblower whose complaint about the phone call led the House to launch the impeachment inquiry.

Nunes asked the witnesses who else they talked to about their concerns, bearing down once Vindman acknowledged one was from the intelligence community.

“I do not know who the whistleblower is,” Vindman said. He has previously said it is not him.

Nunes pressed: “You can plead the fifth, but you’re here to answer questions.”

“These proceedings will not be used to out the whistleblower,” Schiff said.

At one point when Nunes called Vindman “Mr. Vindman,” the colonel reminded him to address him by his rank.

For a long stretch of questioning, the Republicans’ lead counsel probed Vindman’s loyalty, asking at one point about an offer from a Ukrainian official to become the country’s defense minister.

Vindman called it “comical” and said he swiftly reported it up his chain of command.

“I’m an American,” Vindman testified. “And I immediately dismissed these offers.”

Vindman is being provided security by the U.S. Army and local law enforcement, according to a U.S. official. The official said the Army is prepared to take additional steps, if needed, including moving Vindman and his family to a more secure location on a base.

Asked at one point which languages he spoke, Vindman replied Ukrainian, Russian and, joking, “a little English.”

Both witnesses had testified in earlier, closed-door sessions and received subpoenas to appear Tuesday. Their depositions have been publicly released.

Williams testified the Trump phone call was unlike about a dozen others she had heard from presidents over her career. Vindman said Trump’s remarks strayed from the talking points prepared for the president.

“Without hesitation, I knew I had to report this,” Vindman testified. “It was inappropriate, it was improper for the president to demand an investigation into a political opponent.”

Both noted the use of the word “Burisma” on the call. That was a reference to the gas company in Ukraine where Hunter Biden served on the board.

They both said Zelenskiy had mentioned it on the call, but testified it was missing from the rough transcript released by the White House.

At the time of the call, the officials were just beginning to make the link with the stalled military aid, $391 million approved by Congress, that Ukraine was relying on as it confronts neighboring Russia.

Vindman said the uneven power dynamic between the presidents of the East European ally and the U.S. made the demand obvious.

“The culture I come from, the military culture, when a senior asks you to do something … it’s not be taken as a request, it’s to be taken as an order.”

It wasn’t the first time Vindman, a decorated Iraq War veteran, was alarmed over the administration’s push to have Ukraine investigate Democrats, he testified.

Earlier, during an unsettling July 10 meeting at the White House, Ambassador Gordon Sondland told visiting Ukraine officials that they would need to “deliver” before next steps, which was a meeting Zelenskiy wanted with Trump, the officer testified.

On both occasions, Vindman said, he took his concerns about the shifting Ukraine policy to the lead counsel at the NSC, John Eisenberg.

When the White House produced a rough transcript later that day, she put it in the vice president’s briefing materials. “I just don’t know if he read it,” Williams testified earlier in her closed-door House interview.

Pence’s role throughout the impeachment inquiry has been unclear.

Trump has assailed Williams, associating her with “Never Trumpers,” even though there is no indication she has shown any partisanship.

GOP Sen. Ron Johnson, who was deeply involved in other White House meetings about Ukraine, offered a sneak preview of this strategy late Monday when he compared Vindman, a Purple Heart veteran, to the “bureaucrats” who “never accepted Trump as legitimate.”

The White House has instructed officials not to appear, and most have received congressional subpoenas to compel their testimony.

The witnesses are testifying under penalty of perjury, and Sondland already has had to amend his earlier account amid contradicting testimony from other current and former U.S. officials.

Sondland, the wealthy donor whose routine boasting about his proximity to Trump has brought the investigation to the president’s doorstep, is set to testify Wednesday. Others have testified that he was part of a shadow diplomatic effort with the president’s personal lawyer, Rudy Giuliani, outside of official channels that raised alarms.

Morrison has referred to Burisma as a “bucket of issues” — the Bidens, Democrats, investigations — he had tried to “stay away” from.

Sondland met with a Zelenskiy aide on the sidelines of a Sept. 1 gathering in Warsaw, and Morrison, who was watching the encounter from across the room, testified that the ambassador told him moments later he pushed the Ukrainian for the Burisma investigation as a way for Ukraine to gain access to the military funds.

Volker provided investigators with a package of text messages with Sondland and another diplomat, William Taylor, the charge d’affaires in Ukraine, who grew alarmed at the linkage of the investigations to the aid.

A hotelier who donated $1 million to Trump’s inauguration, Sondland is the only person interviewed to date who had direct conversations with the president about the Ukraine situation.

Morrison said Sondland and Trump had spoken about five times between July 15 and Sept. 11 — the weeks that the U.S. assistance was withheld from Ukraine before it was released.