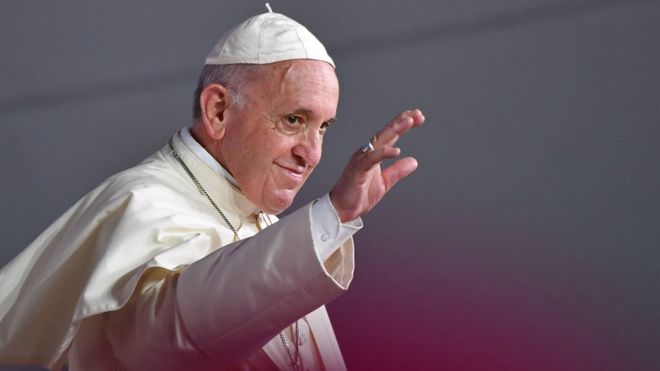 Two prominent Roman Catholic Church cardinals have urged an end of what they call “the plague of the homosexual agenda”, telling bishops to break their complicity over cases of sexual abuse.

In an open letter, Cardinals Burke and Brandmüller say the Church has wrongly blamed the abuse of power by clergy as the main cause of the scandals.

Instead, they say the cases involve priests who have “gone away from the truth of the Gospel”.

They also openly criticize the Pope.

Stories of sexual abuse of minors have emerged across the world and the Church has been accused of covering up crimes committed by priests.

Their letter comes on the eve of an extraordinary summit of bishops in Rome called by Pope Francis as an effort to deal with the scandals rocking the Church.

What are the cardinals saying about sex abuse?

Cardinals Raymond Burke, from the US, and Walter Brandmüller, from Germany, reject that the cases of abuse are a result of “clericalism” – a group of men abusing their power, and protecting each other.

The cardinals belong to the traditionalist wing of the Church, where many believe homosexuality is a root cause of the clerical abuse, and are both outspoken critics of Pope Francis.

“The plague of the homosexual agenda has been spread within the Church, promoted by organized networks and protected by a climate of complicity and a conspiracy of silence,” they said.

“Sexual abuse is blamed on clericalism. But the first and primary fault of the clergy does not rest in the abuse of power but in having gone away from the truth of the Gospel.”

In the Catholic hierarchy, cardinals are second in importance only to the pontiff, and there are currently 223 of them.

Cardinal Burke has links to former Trump White House adviser Steve Bannon, who will reportedly be in Rome during the summit.

Mr Burke is president of the advisory board of the right-wing Dignitatis Humanae Institute, which is setting up a leadership course with Mr Bannon’s help.

Meanwhile, Cardinal Brandmüller caused controversy last month when he blamed homosexuality for the cases of sexual abuse at the Church.

Why do they criticize the Pope?

The Cardinals accuse the Pope of failing to answer questions related to whether the Church should allow divorced and remarried Catholics to receive Holy Communion – they are currently barred.

The issue, raised in 2016 by four cardinals including Burke and Brandmüller, has caused controversy in the Church, prompting many clerics to question the Pope’s leadership.

The mention of this point completely unrelated to Thursday’s summit, and the challenge to the Pope’s authority shows that clerics who are unhappy with Pope Francis are growing more confident, observers say.

Conservative Catholics say they are trying to uphold the Church’s teachings and morals and accuse the Pope of diluting their faith.

What’s the summit about?

The summit is to be attended by the heads of all national bishops’ conferences from more than 130 countries, who will discuss the most pressing crisis facing the modern Church.

This is the beginning of an attempt to address a sickness that has been poisoning the Church since at least the 1980s, leaving its moral authority in tatters, BBC religion editor Martin Bashir says.

Pope Francis must also confront the assumptions, attitudes, and practices that have allowed a culture of abuse to flourish, and the extent of this challenge may prove overwhelming, our correspondent adds.

The Pope called for “decisive action” when he was elected in 2013, but critics say he has not done enough to hold to account bishops who allegedly covered up abuse.