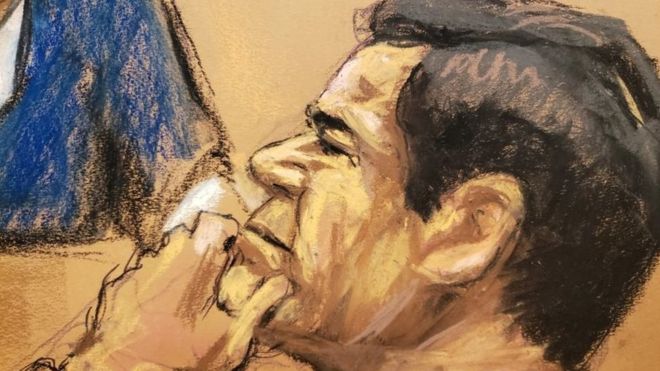 In the most gruesome testimony to date, Isaias Valdez Rios described seeing “El Chapo” brutally beat at least three men before shooting them.

Guzmán denies charges including trafficking and money laundering. If guilty, he could be jailed for life.

The ex-boss of the Sinaloa cartel was held in 2016 after escaping from jail.

He used a tunnel to leave the prison in Mexico but was arrested five months later and extradited to the US in 2017.

The trial, which opened last November amid high security, is expected to last about four months.

Prosecutors say the Sinaloa cartel is the biggest supplier of drugs to the US.

What did the bodyguard say?

In one incident, he said two people originally from Sinaloa who had joined the rival Los Zetas cartel were deemed traitors and rounded up by Guzmán’s hitmen.

For more than three hours the drug lord brutally beat them, the witness said.

“They were completely like rag dolls – their bones were totally broken. They could not move. And Joaquin was still hitting them with the branch and his weapon too,” Mr Valdez Rios said.

The two men were later driven to an area where they could see a large bonfire.

There, the jury was told, “El Chapo” cursed each one before shooting them in the head with his rifle.

The leader of the Sinaloa cartel ordered that they be thrown in the bonfire, telling his men that he did not want any bones to remain, the former bodyguard said.

The third man murdered by “El Chapo” was a member of the Arellano Felix cartel.

The man was then locked in a wooden structure for days. It was only then that the man was brought blindfolded with his hands and legs tied to a graveyard.

“El Chapo” started to interrogate him, and while he was responding, shot him with his handgun.

The man was still gasping for air – but he was dumped in a hole and buried alive, Mr. Valdez Rios said.

The witness also said that he had himself narrowly avoided being killed because at one point the drug lord suspected him of stealing his money.

A former member of Mexico’s special forces, he began working for “El Chapo” in the early 2000s.

He faces a long prison sentence on drug trafficking charges. By co-operating with prosecutors, he hopes to see his sentence reduced.