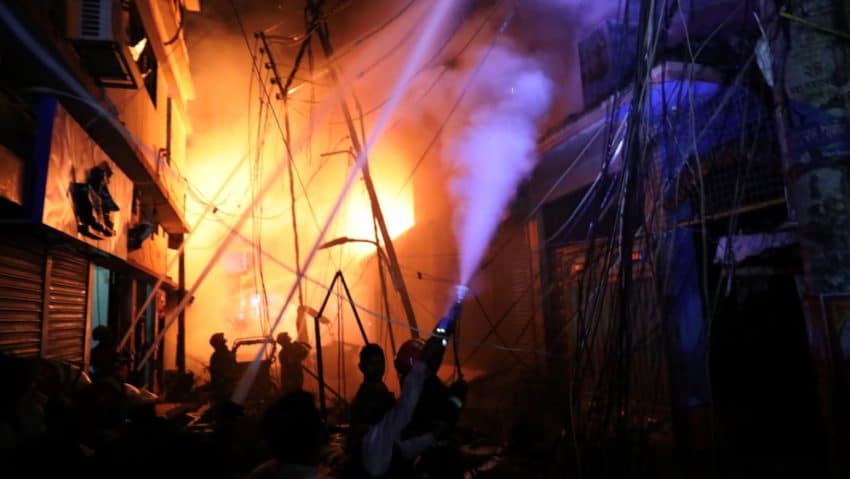 At least 70 people have been killed after a massive fire raced through several apartment buildings also used as chemical warehouses in a centuries-old part of Bangladesh‘s capital, Dhaka, according to fire officials.

The devastating blaze, which broke out around 10:40 pm (16:40 GMT) on Wednesday at a building in Chawkbazar, in the old part of Dhaka, was brought under control by firefighters almost 12 hours later.

Al Jazeera’s Tanvir Chowdhury said from Dhaka there “are at least 70 people dead so far and 41 are in the hospital. Some are in critical condition”.

Families members are coming with information about relatives they cannot find, Chowdhury said, and “at least 25 people are unaccounted for”.

Many of the bodies were burned beyond recognition, Chowdhury said. Their identification “may require a DNA test later”.

Haji Abdul Kader, whose shop was destroyed in the fire, said he only survived the blaze as he had left the shop to go to a pharmacy.

“When I was at the pharmacy, I heard a big bang. I turned back and saw the whole street, which was jam-packed with cars and rickshaws, in flames. Flames were everywhere,” he told the AFP news agency.

“I got burned and rushed to the hospital,” he said.

Shamsul Alam, an officer at the department of explosives, told Al Jazeera that an initial investigation found that the fire started when a gas cylinder burst.

“Our team is still investigating. Nothing conclusive can be said now,” he said.

The flames raced through four adjoining structures, which were also used as chemical warehouses, including for storing plastic granules and body sprays.

“There was a traffic jam when the fire broke out. So, people could not escape,” Ahmed said, describing a part of town where the streets are very narrow.

“I saw with my own eyes that a sudden massive bang with fire and shockwaves totally destroyed the roadside wall,” Hazi Mohammed Salahuddin, who was injured in the fire, said.

“I was on a rickshaw when the explosion took place. I don’t think my rickshaw driver is alive anymore.”

Television images showed firefighters climbing ladders to try to spray water on one of the buildings where the fire had largely been contained. One helicopter was also seen hovering over the area.

A fire official told reporters that the blaze has been “confined” but not yet doused despite the efforts of more than 200 firefighters.

“It will take time. This is not like any other fire,” he said, adding the blaze became so devastating due to the “highly combustible” chemicals stored there.

President Abdul Hamid, Prime Minister Sheikh Hasina expressed deep shock at the incident and sympathy with the families of those killed in the fire.

Home Minister Asaduzzaman Khan Kamal visited the scene and announced the formation of a committee to investigate the fire, which will submit its report within seven days.

The Ministry of Industries also formed a 12-member body to investigate the cause of the fire, which is due to report within five days.

Bangladesh has been harshly criticized for its poor safety record, with many buildings being used both for residential and commercial purposes.

A similar fire in 2010, in an old Dhaka building, which was also used as a chemical warehouse, killed more than 120 people in one of the worst fire tragedies in Dhaka.

“There was a lot of protests at the time to remove all these illegal factories and chemical warehouses from the area, which obviously hasn’t been done,” Al Jazeera’s Chowdhury said.