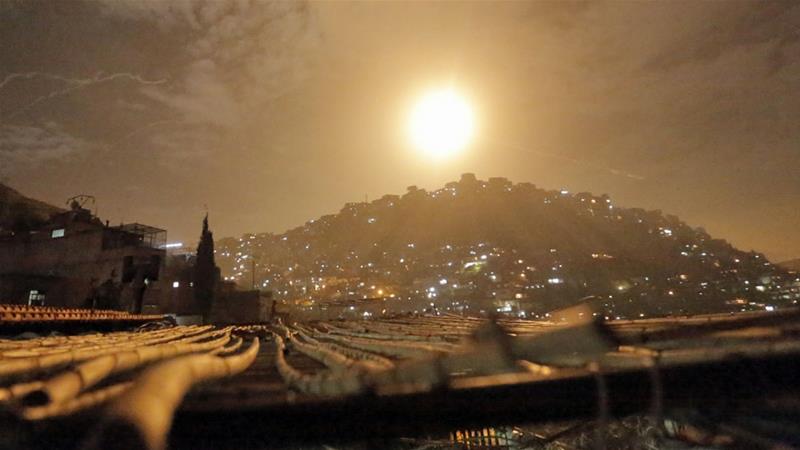 The Israeli military carried out overnight attacks on Iranian targets in Syria, while Syrian state media reported that the country’s air defenses have shot down “hostile targets”. Russia’s defense control center was quoted by Interfax news agency as saying that Syrian military air defenses destroyed more than 30 Israeli cruise missiles and guided bombs during the raids. An attack targeting an airport in southeastern Damascus killed four Syrian soldiers and wounded six, the military center was quoted by RIA news agency as saying on Monday, The Syrian Observatory for Human Rights, a UK-based monitor, said the toll of the raids was 11.

“We have started striking Iranian Quds targets in Syrian territory. We warn the Syrian Armed Forces against attempting to harm Israeli forces or territory,” Israel’s military said in a statement in the early hours of Monday. The Quds Force is in charge of Iran’s Revolutionary Guards’ overseas operations. Iran is a major backer of Syrian President Bashar al-Assad and his forces in the country’s long-running war. Al Jazeera’s Harry Fawcett, reporting from Eilat in southern Israel, said the Israeli military’s confirmation that it was striking targets inside Syria as the operation was ongoing was “highly unusual”. News agency reports quoted witnesses in the Syrian capital, Damascus, as saying that loud explosions rang out in the night sky.

Syrian state news agency SANA said the country’s military air defenses thwarted “hostile targets” on Sunday night and shot down several of them, without elaborating. The attacks followed cross-border attacks on Sunday in which Syria said it repelled an Israeli air raid. Israel said it intercepted a rocket fired at the occupied Golan Heights.

The military statement did not specify where the rocket had been launched from. The northern Golan is also close to Lebanese territory. Prime Minister Benjamin Netanyahu had acknowledged an Israeli attack last week on what he called an Iranian arms cache in Syria, where Tehran provides Damascus with vital support. He told his cabinet Israel had carried out “hundreds” of attacks over the past years of Syria’s war to curtail Iran and its ally Lebanon’s Hezbollah.

Usually silent about its attacks on Iranian targets near its frontier, Israel has lifted the veil this month, a sign of confidence in a campaign waged amid occasional tensions with Russia, which is also backing Assad. Fawcett said that there had been speculation that “this lifting of the ambiguity policy may well give the Syrians and the Iranians cause to strike more directly at Israel now that Israel had owned up publicly to what it was doing”.

“It’s too early to say whether this is an instance of that,” he added.