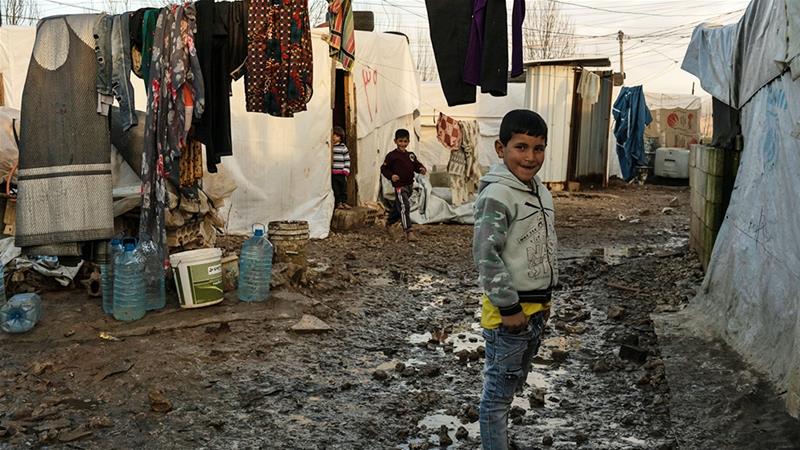 Bekaa Valley, Lebanon – Syrian refugees in Lebanon’s east are bracing for yet another potentially heavy storm which is set to bring rains and snowfall on Sunday.

Warnings of a looming winter storm have pushed refugees in Ghazze, a town in the Bekaa Valley, to take precautions against another round of floods, days after the country was hit by Storm Norma on January 6.

Lebanon is home to more than one million Syrian refugees, most of whom live in informal settlements made out of tarpaulin tents supported by wooden frames.

They are usually required to pay landowners rent ranging from $50 to $200, depending on the area, even as half of the Syrian refugee community in Lebanon already lives in extreme poverty, earning less than $3 a day, according to the United Nations Refugee Agency (UNHCR).

‘The tent was our castle’

In Ghazze, refugees are housed in at least 1,500 tents divided over several unofficial camps, according to municipality figures published last year. In one camp, dubbed “008” by the UN, at least 36 out of 48 tents were flooded during Storm Norma.

While some families in Ghazze say they have no other option than to withstand the upcoming storm, others have already sought temporary shelter.

Wessal Al Mustafa, a mother of five, said she simply cannot put her children through a storm similar to Norma, which affected more than 11,000 Syrian refugees across the country. “The last storm was so sudden,” Al Mustafa, who fled Raqqa in 2014, told Al Jazeera.

“I barely managed to rush my children out of the tent, let alone grab a few clothing items before we were completely soaked,” the 32-year-old said.

“To us, this tent was our castle.”

The family lost their mattresses, blankets, food items, and most of their clothing to the floods.

Their tent carried a stench of mold that has forced the Al Mustafa family to seek temporary, yet more expensive shelter in a nearby housing complex until the tent is restored.

The camps lack adequate infrastructure, and given the poor sewage systems, wastewater has overflowed and seeped into the tents, increasing the risk of diseases in the crammed settlements.

Since the arrival of the refugees from neighboring Syria, NGOs have taken the responsibility of WASH (water, sanitation, and hygiene) efforts, but in Ghazze, these efforts have been halted due to lack of funding.

Mustafa’s eldest daughter, Fatma, said she wishes she could have saved more of her clothes from the floods.

“I had to carry my younger sister, who was in shock as the water quickly filled up the tent and reached our hips,” the 14-year-old said.

There has been a stark deterioration in shelter conditions for Syrian refugees in Lebanon, according to a 2018 UN study.

Fundraising campaigns led by NGOs and individuals may bring temporary relief to refugees, but Syrians in Ghazze say more is needed to be done by the government to improve living conditions.

The camp’s community leader told Al Jazeera that he has already mobilized a team of “young men” who will be assisting in evacuating families with flooded tents to neighboring camps that have remained unaffected, and garages in the area.

“We have called on the local municipality time and time again to at least raise the ground level of the tents here, but they have yet to respond,” Hussam Mansour told Al Jazeera.

“It’s sheer negligence on their part,” he said.

According to Mansour, some NGOs arrived on Saturday to distribute blankets and mattresses, as well as gas for heaters.

The main highway connecting the capital Beirut to the Bekaa Valley had been sealed off to trucks transporting aid and was only been cleared for the passage of such larger vehicles by authorities on Saturday.

‘Nothing to return to’

Meanwhile, an education centre run by a group of Syrian women will be open as a temporary shelter for families evacuated in Ghazze.

Ghada Abu Mito, a co-founder of Dammah, the NGO that runs the school, said the centre has begun preparing for the next storm by clearing classrooms for families who will require immediate shelter.

“We laid out blankets and mattresses in the classrooms, and will also heat the rooms which are important especially for the children,” Abu Mito told Al Jazeera.

“We had to respond to the crisis quickly and accommodated 75 people for about four days,” she said, adding almost all of those who evacuated suffered flu symptoms and chest infections, she said.

“Their psychological state was a mess,” she added. “Many wondered why no one rushed to help.”

Lebanon’s leaders have urged Syrian refugees to return to their home country, but many refugees still fear being either arrested or drafted into the army upon repatriation.

UNHCR’s Rana Khoury told Al Jazeera the agency has been advocating for either the resettlement of refugees to a third countries, or working with concerned authorities to remove obstacles refugees are seeing for their return to Syria.

“We’re advocating for these two solutions because the government does not allow for permanent resettlement,” Khoury explained.

Syrian refugees in Lebanon are unable to work, and can only obtain work permits to work in agriculture and construction to sustain themselves in the country, which has suffered economically over the years.

The prolonged political deadlock over the formation of a new government has also worsened the situation.

Still, for people such as Wessal Al Mustafa, staying in Lebanon amid challenges such as the harsh winters, is the only option.

“I love my country … but for now, there is nothing to return to,” she said.