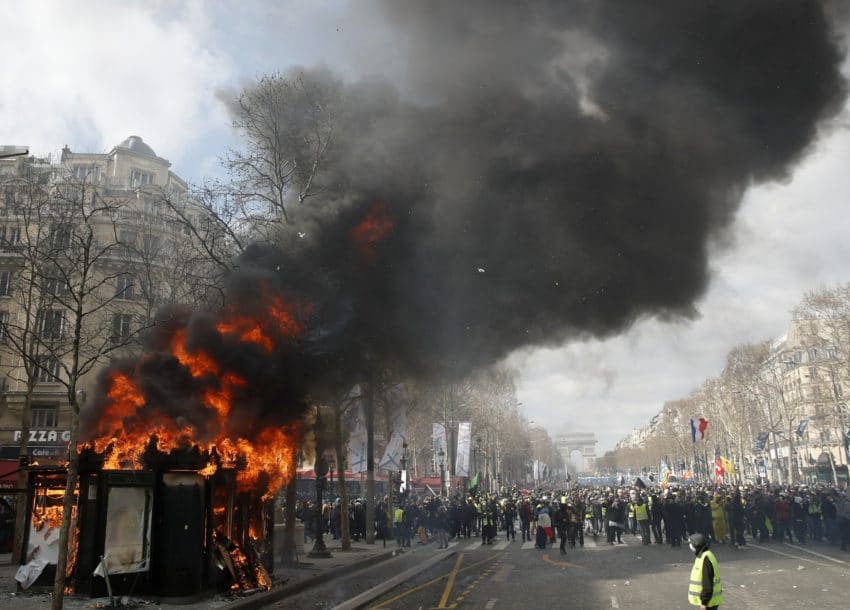 PARIS (AP) — French yellow vest protesters set life-threatening fires, smashed up luxury stores and clashed with police Saturday in the 18th straight weekend of demonstrations against President Emmanuel Macron. Large plumes of smoke rose above the rioting on Paris’ landmark Champs-Elysees avenue, and a mother and her child were just barely saved from a building blaze.

The resurgent violence came as protesters are seeking to breathe new life into a movement that seemed to be fizzling, and get attention from French leaders and media whom they see as underplaying their economic justice cause and favoring the elite.

Paris police appeared to be caught off guard by the speed and severity of the unrest. French police tried to contain the demonstrators with repeated volleys of tear gas and water cannon, with limited success.

Cobblestones flew in the air and smoke from fires set by protesters mingled with clouds of tear gas sprayed by police, as tensions continued for hours along the Champs-Elysees.

One perilous fire targeted a bank on the ground floor of a seven-story residential building. As firetrucks rushed over, a mother and her child were rescued as the fire threatened to engulf their floor, Paris’ fire service told The Associated Press. Eleven people in the building, including two firefighters, sustained light injuries, as other residents were evacuated. 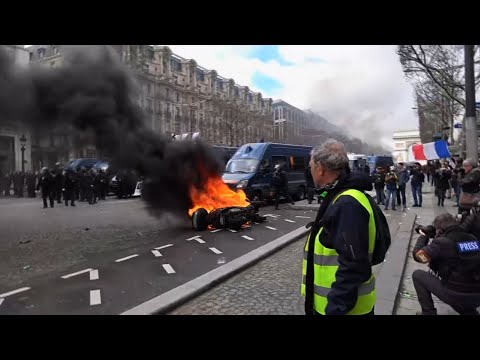 Protest organizers had hoped to make a splash Saturday, which marks the 4-month anniversary of yellow vest movement that started Nov. 17. It also marks the end of a two-month national debate that Macron organized to respond to protesters’ concerns about sinking living standards, stagnant wages and high unemployment.

The violence started minutes after the protesters gathered Saturday, when they threw smoke bombs and other objects at officers along the famed Champs-Elysees — scene of repeated past rioting — and started pounding on the windows of a police van, prompting riot police to retreat.

Simultaneous fires were also put out from two burning newspaper kiosks, which sent black smoke high into the sky. Several protesters posed for a photo in front of one charred kiosk.

Demonstrators also targeted symbols of the luxury industry, as shops including brands Hugo Boss and Lacoste were smashed up and pillaged, and mannequins thrown out of the broken windows. A posh eatery called Fouquet’s, which is associated with politicians and celebrities, was vandalized and set on fire. A vehicle burned outside the luxury boutique Kenzo, one of many blazes on and around the Champs-Elysees.

Interior Minister Christophe Castaner said on French television that an estimated 10,000 yellow vest protesters were in Paris and another 4,500 protesters were demonstrating around France. He also said the crowd included 1,500 “ultraviolent ones who are there to smash things up.”

Still, the numbers paled beside the 30,000 people estimated to be taking part in a separate climate march that was weaving through Paris at the same time, according to Castaner.

And the number of yellow vest protesters remains smaller than early in the movement, when it drew masses to the streets nationwide and polls showed a majority of French people supporting their cause. Since then, repeated rioting by the protesters and economic concessions by Macron have diminished public support for the yellow vest cause.

Paris police told The Associated Press that 109 people were arrested in Paris on Saturday.

Yellow vest groups representing teachers, unemployed people and labor unions were among those that organized dozens of rallies and marches.

Protesters dismiss Macron’s national debate on the economy as empty words and a campaign ploy to gain support for the European Parliament elections in May. Protesters are angry over high taxes and Macron policies seen as coddling business.

Many protesters, particularly those on the political extremes, see the national debate as a failure.

“As long as we don’t get any results, we will continue (to protest) for all we asked for: pay rises, pensions, purchasing power, food waste. Everything,” said Martine Sous, a protester from the Eure region west of Paris.

While the rioters drew most attention Saturday, most of the protesters remain peaceful.

“We are pacifists,” Sous insisted.

By THOMAS ADAMSON and ANGELA CHARLTON