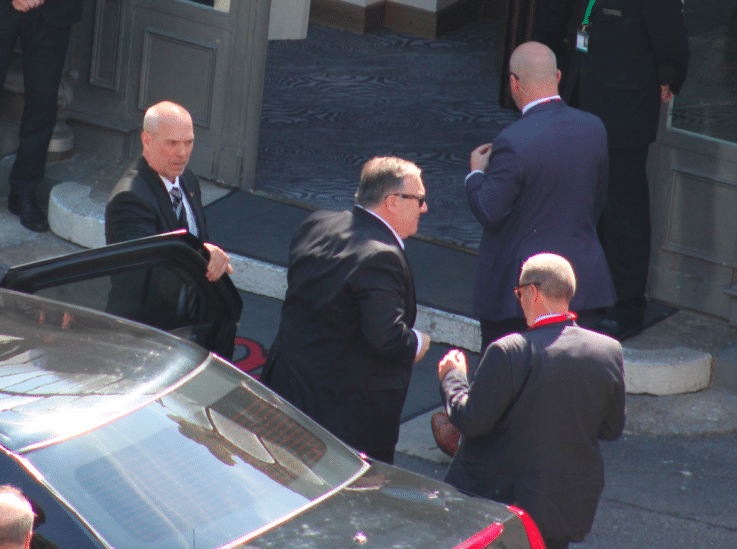 The Americans have come to Bilderberg in force this year. Secretary of State Mike Pompeo arrived on Saturday afternoon in a motorcade so long it stretched halfway back to Geneva. He’ll be sharing his thoughts on “A New Strategic Order” with the head of NATO, two prime ministers, the German foreign minister, the King of Holland, and any number of finance bosses and billionaires, many of them from the world of tech.

A slew of Silicon Valley luminaries are attending this year’s elite transatlantic conference at a heavily-guarded five-star hotel on the shores of Lake Geneva. They include Microsoft CEO Satya Nadella, who is making his first appearance at the secretive summit, and his fellow Microsoft board member, Reid Hoffman, who’s a regular face at the Bilderberg buffet.

The White House is making itself felt at this year’s conference, by sending along not only Pompeo, but Trump’s dealmaking diplomat son-in-law, Jared Kushner, and two members of his National Security Council. Not to be outdone, the Pentagon has sent two senior officials: their top military strategist and the technical director for AI.

As the war machine gets smarter, and every last bit of weaponry becomes AI-enhanced, the lines between Silicon Valley and the Pentagon start to get awfully blurry. Sniff this year’s Bilderberg and you can smell this new kind of war: “cyber threats” and “the weaponisation of social media” are on the agenda. And around the table are the head of GCHQ and the director of NATO’s new StratCom Centre of Excellence, which spearheads “digital engagement” and psychological warfare.

This blurring of tech and war takes physical form in some of the participants at Bilderberg. Longtime conference insider and former Google CEO Eric Schmidt chairs the Pentagon’s Defense Innovation Board and also heads up the new National Security Commission on Artificial Intelligence. Two other members of the Defense Innovation Board are here in Montreux: Reid Hoffman, and the psychologist Adam M. Grant.

Alongside Schmidt on the Bilderberg steering committee are yet another two tech billionaires, Alex Karp and Peter Thiel. Karp is the CEO of Palantir, a shady data-analytics company which has just won a massive $800 million Pentagon battlefield intelligence contract. Palantir was set up in 2004 by Peter Thiel with backing from the CIA. Thiel, who was a co-founder of PayPal, is a director of Facebook and is high tech’s most vocal supporter of Donald Trump.

Truly it boggles the mind what Donald Trump would think about his poor innocent son-in-law wandering into the murky world of Bilderberg, with its prime ministers and billionaire investors strategizing behind closed doors with Pentagon officials and NATO chiefs, all under the watchful eye of Goldman Sachs International.

And not just Goldman Sachs. In Montreux, as ever, there’s a healthy number of high-finance bosses, including the chairmen of HSBC, Deutsche Bank and Santander and the CEOs of AXA and Credit Suisse. But as the movement in Bilderberg towards AI and tech continues, you can see within the group a fault line opening up between Wall Street and Silicon Valley.

A crisis is looming for Bilderberg, and not merely because of the rise in anti-globalization movements and a creeping loss of faith in the EU project. It’s a crisis of leadership. With the Brexit, Frexit, Grexit and even Polexit dominoes threatening to fall, Bilderberg needs to gird its loins for the long haul if it wants the transatlantic alliance to thrive and its beloved EU to survive. But who’s going to be doing the girding?

The problem Bilderberg faces is a loss of quality, of intellectual backbone. With David Rockefeller tucked away since 2017 in his cryogenic pod, and Henry Kissinger knocking on hell’s door, you realize that Bilderberg is facing a generational crisis. You might not like or admire Henry Kissinger, you might want him strung up for war crimes, but you have to admit he’s a heavyweight statesman and historian. He’s a psychopath with vision. Where will Bilderberg find the serious ideologues to lead them into the 2020s?

Should they look to the academics? The globalists have their pet professors, like Niall Ferguson, now an American citizen, who once described himself as ”a fully paid-up member of the neo-imperialist gang”. But he doesn’t have anything like the gravitas to get anywhere near the helm.

If you look around the current conference for people with enough substance — enough ideological meat on their bones to drive Bilderberg forward, you won’t find it in finance, and you certainly won’t find it in politics, because for the last few decades the really smart people have gone into engineering and tech. And that, surely, is where the center of gravity within Bilderberg will end up.

The two figures at Bilderberg who seem to have an aura of influence about them are Schmidt and Thiel. Over the years, Schmidt has been gently aligning himself as the heir to Kissinger, and has populated recent conferences with Google executives. The Libertarian Thiel has already engineered his lieutenant, Alex Karp, onto the steering committee.

Whichever one of them manages to grab the most sway, the shift in influence toward Silicon Valley will inevitably go along with an even further slide of power toward the U.S. and away from Europe. Tech is a force greater even than Kissinger, a radical reconstructive force that nothing in Bilderberg can withstand. And so the future of the group, which was begun by Europeans, will end up firmly in the hands of the Americans.

Charlie Skelton is a U.K.-based writer and journalist.

The views expressed in this article are the author’s own.​​​