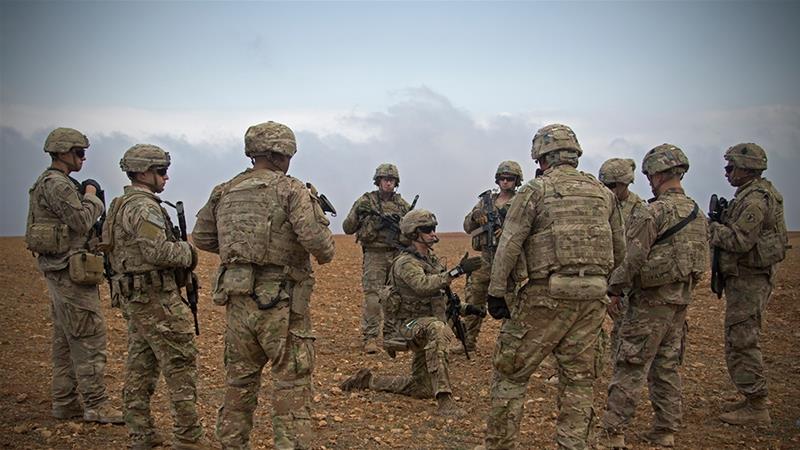 John Bolton to Israel and Turkey to discuss Syria pullout

President Donald Trump’s national security adviser said on Sunday the US military withdrawal from northeastern Syria is conditioned on finishing off the armed group ISIL and on Turkey assuring the safety of Kurdish troops allied with the United States.

John Bolton, who traveled to Israel to reassure the US ally of the Trump-ordered withdrawal, said there is no timetable for the pullout of American forces in northeastern Syria, but insisted it’s not an unlimited commitment.

“There are objectives that we want to accomplish that condition the withdrawal,” Bolton told reporters in Jerusalem.

“The timetable flows from the policy decisions that we need to implement.” Those conditions, he said, included the defeat of remnants of Islamic State of Iraq and the Levant (ISIL, also known as ISIS) in Syria, and protection for Kurdish militias who have fought alongside US troops against the group.

“We don’t think the Turks ought to undertake military action that’s not fully coordinated with and agreed to by the United States at a minimum so they don’t endanger our troops, but also so that they meet the president’s requirement that the Syrian opposition forces that have fought with us are not endangered,” he told reporters.

Bolton was deployed to Israel to allay concerns about President Donald Trump‘s decision to withdraw troops from Syria and discuss the process with Turkish officials.

The pullout announced last month was initially expected to be completed within weeks, but the timetable has slowed as the president acceded to requests from aides, allies and members of US Congress for a more orderly withdrawal.

Bolton’s comments mark the first public confirmation that the withdrawal has been slowed.

He will meet Israel‘s prime minister, Benjamin Netanyahu, and other officials on Sunday before traveling to Turkey on Monday.

Israeli officials have expressed concern that a swift withdrawal of the roughly 2,000 troops could enable Iran to expand its influence and presence in war-torn Syria.

“Israel is concerned about the consequences of this troop pullout. There’s a balance of power at play here and Israel worries Iran-backed militias and Hezbollah will take advantage of any change in that,” said Al Jazeera’s Stefanie Dekker, reporting from West Jerusalem.

US warns Syria against use of chemical weapons

Trump’s move has also raised fears about clearing the way for a Turkish assault on Kurdish fighters in Syria.

The People’s Protection Units (YPG) has been highly effective in the war against ISIL, a part of the wider Syrian conflict pitting a range of armed groups against President Bashar al-Assad’s forces and sometimes against each other.

But Turkey has long castigated Washington for its military relationship with the Syrian YPG. Ankara regards the YPG an extension of the PKK, a Kurdish group which has waged a 34-year-old armed struggle inside Turkey.

The YPG has indicated that it might seek a deal with Damascus after the US forces have gone.

In his comments on Sunday, Bolton said the US has asked the Kurds to “stand fast now” and refrain from seeking protection from Russia or Assad’s government.

“I think they know who their friends are,” he added, speaking of the Kurds.

Jim Jeffrey, the special representative for Syrian engagement and the newly named American special envoy for the anti-Islamic State coalition, is to travel to Syria this coming week in an effort to reassure the Kurdish fighters that they are not being abandoned, Bolton said.

Turkey’s presidential spokesman called allegations that his country planned to attack the US-allied Kurds in Syria “irrational” and said Turkey was fighting terrorism for national security.

In comments carried by the official Anadolu news agency, Ibrahim Kalin said the Kurdish fighters oppressed Syrian Kurds and pursued a separatist agenda under the guise of fighting ISIL.

“That a terror organization cannot be allied with the US is self-evident,” he said.