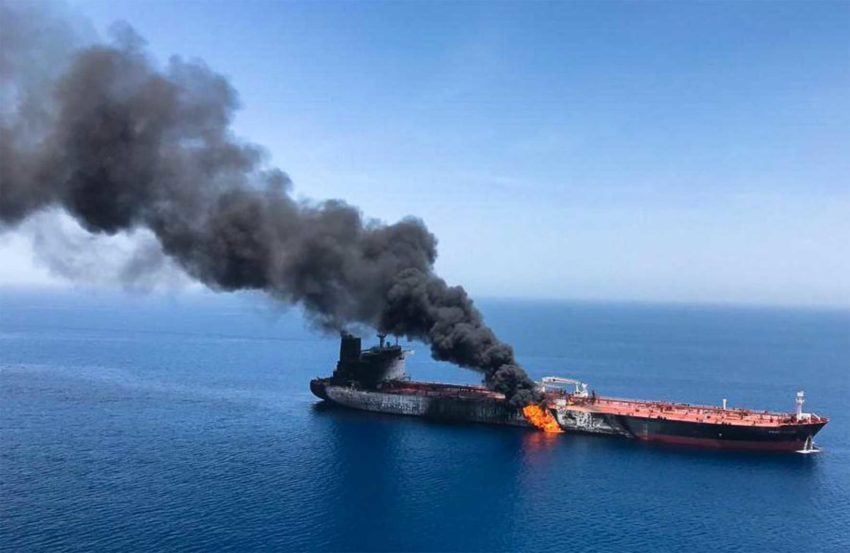 Two oil tankers were attacked and left adrift on Thursday in the Gulf of Oman, driving up oil prices and stoking fears of a new confrontation between Iran and the United States.

The White House said U.S. President Donald Trump had been briefed on the issue, after Washington accused Tehran of being behind a similar incident on May 12 when four tankers were attacked in the same area, a vital oil shipping route.

Russia was quick to urge caution, saying no one should rush to conclusions about Thursday’s incident or use it to put pressure on Tehran, which has denied the U.S. accusations.

There were no immediate statements apportioning blame after Thursday’s incidents, nor any claims of responsibility.

The crew of the Norwegian-owned Front Altair abandoned ship in waters between Gulf Arab states and Iran after a blast that a source said might have been from a magnetic mine. The ship was ablaze, sending a huge plume of smoke into the air.

The crew were picked up by a passing ship and handed to an Iranian rescue boat.

The second ship, a Japanese-owned tanker, was hit by a suspected torpedo, the firm that chartered the ship said. Its crew were also picked up safely.

Crude prices climbed 4% after the attacks near entrance to the Strait of Hormuz, a crucial shipping artery for Saudi Arabia, the world’s biggest oil exporter, and other Gulf energy producers. [O/R]

“We need to remember that some 30% of the world’s (seaborne) crude oil passes through the straits. If the waters are becoming unsafe, the supply to the entire Western world could be at risk,” said Paolo d’Amico, chairman of INTERTANKO tanker association.

Tensions have risen in the region since the United States pulled out of a deal between Iran and global powers that aimed to curb Tehran’s nuclear ambitions.

Japanese Prime Minister Shinzo Abe, who was visiting Tehran when Thursday’s attacks occurred, carried carrying a message for Iran from Trump, who has demanded that the Islamic Republic curb its military programs and its influence in the Middle East. An oil tanker is seen after it was attacked at the Gulf of Oman, June 13, 2019. ISNA/Handout via REUTERS

Abe, whose country was a big importer of Iranian oil until Washington ratcheted up sanctions, urged all sides not to let tensions in the area escalate.

Iran also said it would not respond to Trump’s overture, the substance of which was not made public.

Britain said it was “deeply concerned” about the attacks. Germany, which like Britain remains a signatory to the nuclear pact with Iran, said the “situation is dangerous” and all sides needed to avoid an escalation.

The Arab League said some parties were “trying to instigate fires in the region”, without naming a particular party.

Oman and the United Arab Emirates, which have coastlines on the Gulf of Oman, did not immediately issue any public comment.

Saudi Arabia and the UAE, both majority Sunni Muslim nations that have a long-running rivalry with predominantly Shi’ite Iran, have previously said attacks on oil assets in the Gulf pose a risk to global oil supplies and regional security.

Bernhard Schulte Shipmanagement said the Japanese tanker Kokuka Courageous was damaged in a “suspected attack” that breached the hull above the water line while transporting methanol from Saudi Arabia to Singapore.

Japan’s Kokuka Sangyo, owner of the Kokuka Courageous, said the ship was hit twice over a three-hour period.

A shipping broker said the vessel might have been struck by a magnetic mine. “Kokuka Courageous is adrift without any crew on board,” the source said.

The crew of about 21 or 22 people was picked up by the Coastal Ace vessel, Denis Bross of Acta Marine in the Netherlands told Reuters. He said they were handed to a U.S. Navy vessel.

Taiwan’s state oil refiner CPC said the Front Altair, owned by Norway’s Frontline, was “suspected of being hit by a torpedo” around 0400 GMT carrying a Taiwan-bound cargo of 75,000 tonnes of petrochemical feedstock naphtha, which Refinitiv Eikon data showed had been picked up from Ruwais in the UAE.

Frontline said its vessel was on fire but afloat, denying a report by the Iranian news agency IRNA that the vessel had sunk.

Front Altair’s 23-member crew abandoned ship after the blast and were picked up by the nearby Hyundai Dubai vessel. The crew was then passed to an Iranian rescue boat, Hyundai Merchant Marine said in a statement.

Iran’s IRNA reported that Iranian search and rescue teams picked up 44 sailors from the two damaged tankers and took them to the Iranian port of Jask. The numbers in the Iranian media report could not be independently confirmed.

Iranian Supreme Leader Khamenei told Abe during his visit to Iran that Tehran would not repeat its “bitter experience” of negotiating with the United States, state media reported.

“I do not see Trump as worthy of any message exchange, and I do not have any reply for him, now or in future,” the Iranian leader said.