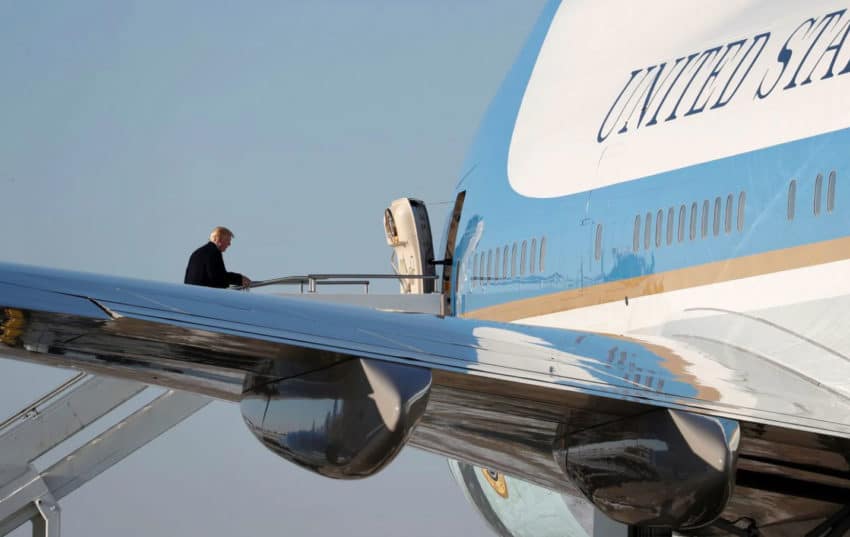 A summit between Donald Trump and the North Korean leader Kim Jong-un ended without agreement after the US refused North Korean demands for sanctions relief, the US president has said.

“It was all about the sanctions,” Mr Trump told reporters. “They wanted the sanctions lifted in their entirety and we couldn’t do that.”

The pair had been expected to announce progress on denuclearisation.

“Sometimes you have to walk and this was one of those times,” Mr Trump said.

Speaking at a news conference after the summit, in the Vietnamese capital, Hanoi, Mr Trump said no plans had been made for a third summit, but he expressed optimism about a “good outcome” in the future.

And on his flight back to the United States, Secretary of State Mike Pompeo said he was very hopeful that officials from both sides could resume talks before too long.

The original White House programme for the day had planned for a “joint agreement signing ceremony” as well as a working lunch for the two leaders, but expectations were abruptly dashed with the cancellation of both.

What were the sticking points?

According to Mr Trump, Mr Kim made a significant offer – to dismantle all of the Yongbyon complex, the research and production facility at the heart of North Korea’s nuclear programme. But in return Mr Kim wanted all sanctions on North Korea lifted, something the US was not prepared to offer.

There was also a question over the network of facilities that extend beyond Yongbyon. Last month, Stephen Biegun, the US state department special representative for North Korea, said North Korea had committed in pre-summit talks to destroy all of the nation’s plutonium- and uranium-enrichment facilities, dependent on unspecified US measures in return.

Yongbyon is North Korea’s only known source of plutonium but the country is believed to have at least two other facilities where uranium is enriched.

Those unspecified US measures appear now to have been complete sanctions relief, which Mr Trump would not offer. The US president also suggested in his news conference that Mr Kim had offered only the destruction of Yongbyon and not North Korea’s entire nuclear apparatus.

The president said that when he raised the issue of a second enrichment facility apart from Yongbyon, the North Korean delegation was “surprised” by what the US knew.

Is this a setback for Trump?

The first summit between the two leaders, which took place in Singapore in June 2018, was criticised for having produced little in terms of substance, leading to anticipation that Mr Trump would push at the summit in Hanoi to produce an agreement on denuclearisation.

The failure will be viewed as a setback for self-styled deal-maker Mr Trump, who has talked up his historic rapprochement with Mr Kim as a significant policy achievement.

Some saw the president’s decision to not agree a deal as a good move.

“From Mr Trump’s perspective it will be a loss he can weather,” Andray Abrahamian, a North Korea expert at Stanford University, wrote in a column for the BBC. “A ‘bad deal’ in which he gave away a lot would inspire years of debate and pushback from US foreign-policy elites. With this, he’s spun it as saveable through working-level talks.”

The summit came as Mr Trump was facing increased scrutiny at home in the US over his business dealings and alleged ties to Russia, after his former lawyer and fixer Michael Cohen testified before Congress on Wednesday.

A statement from South Korea’s presidential office called the breakdown of talks “regrettable” but said the US and North Korean leaders had made “more meaningful progress than at any time prior”.

South Korean leader Moon Jae-in has worked to improve bilateral relations between the two Koreas, and played a role in arranging the Trump-Kim summit in Singapore.

A later statement from President Moon said he had held a 25-minute phone conversation with Mr Trump and “looked forward to productive results at follow-up consultations between the US and North Korean leaders”.

“Solving this problem is definitely not something that can be achieved overnight,” foreign ministry spokesman Lu Kang said.

What was said about Otto Warmbier?

US media extensively covered remarks by Mr Trump about an American student, Otto Warmbier, who died from extensive injuries shortly after he was released from North Korean detention in 2017.

The president said he had raised the Warmbier case with Mr Kim and believed the North Korean leader’s assurances that he knew nothing of the student’s treatment.

Warmbier, who was 22, was arrested for taking a propaganda poster from a hotel while on a visit to Pyongyang in January 2016. He was sentenced to 15 years of hard labour.

Mr Trump is not thought to have pressed Mr Kim during their talks on North Korea’s wider human rights record.

According to Human Rights Watch, the United Nations and international powers, the North Korean regime is among the world’s worst human rights abusers, with an estimated 80,000 – 120,000 political prisoners and a history of murder, torture, and sexual violence perpetrated against its citizens.

What does denuclearisation mean?

There is uncertainty about what exactly both sides mean by denuclearisation. Washington has previously said North Korea must unilaterally give up its all of its nuclear weapons and destroy all of its nuclear facilities before there can be any sanctions relief, but that condition is known to be a sticking point for the North Koreans.

It is thought Mr Kim views denuclearisation as a mutual arrangement in which the US withdraws its military presence on the Korean peninsula.

Asked at the news conference on Thursday what he meant by denuclearisation, Mr Trump said: “To me it’s pretty obvious, we have to get rid of the nukes.”

Mr Trump said the US delegation “had some options and this time we decided not to do any of the options”.

Where does this leave the relationship?

The pair seemed to get along at the Hanoi summit, as they did at the previous summit in Singapore. They took a poolside stroll for the cameras, although neither appeared to say much.

Speaking after the talks in Hanoi, Mr Trump said Mr Kim was “quite a guy and quite a character” and described their relationship as “very strong”.

Despite the lack of an agreement, the second summit would appear to build on a significant shift in the tenor of the relationship between the two nations.

An end to war?

Before the summit, there was talk of a possible political declaration to end the 1950-53 Korean War, which finished with an armistice rather than a full peace treaty.

With the abrupt end of the talks, that peripheral goal seemed to have been kicked into the long grass.