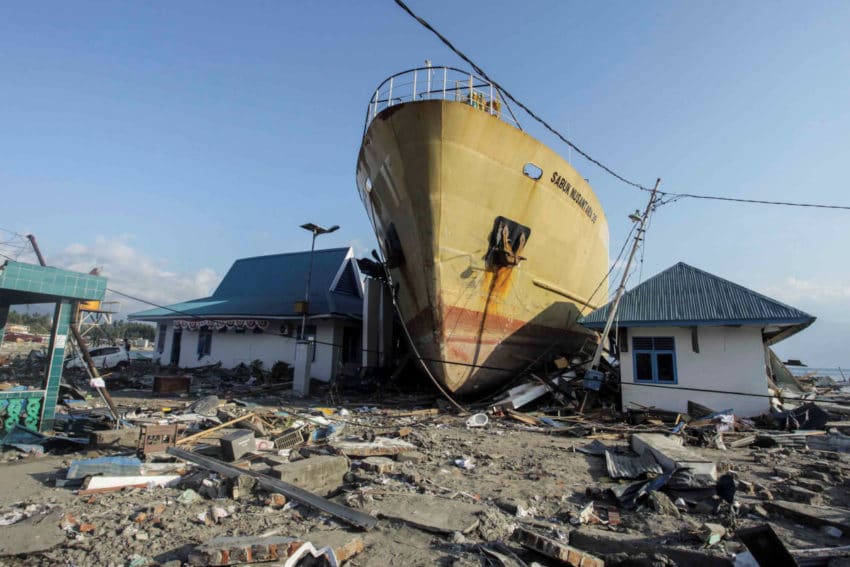 CARITA BEACH, Indonesia (AP) — The deadly tsunami struck in the dark, without warning.

At least 222 people were killed as waves smashed into houses, hotels and other beachside buildings Saturday night along Indonesia’s Sunda Strait, in a disaster that followed an eruption and possible landslide on Anak Krakatau, one of the world’s most infamous volcanic islands.

More than 800 others were injured and dozens were reported missing after the tsunami hit coastal areas along western Java and southern Sumatra islands at 9:27 p.m. Saturday amid a Christmas holiday weekend, the Disaster Management Agency said. The death toll could increase once authorities hear from all stricken areas.

It was the second deadly tsunami to hit Indonesia this year, but the one that killed more than 2,500 people on the island of Sulawesi on Sept. 28 was accompanied by a powerful earthquake that gave residents a brief warning before the waves struck.

On Saturday night, the ground did not shake beforehand to alert people to the oncoming wave that ripped buildings from their foundations in seconds and swept terrified concertgoers on a popular resort beach into the sea.

Azki Kurniawan, 16, said his first warning about the tsunami was when people burst into the lobby of the Patra Comfort Hotel shouting, “Seawater rising!”

Kurniawan, who was undergoing vocational training with a group of 30 other students, said he was confused because he had not felt a big earthquake. He said he ran to the parking lot to try to reach his motorbike but discovered it was already flooded.

“Suddenly, a 1-meter (3.3-foot) wave hit me,” he said, his eyes red and swollen from crying. “I was thrown into the fence of a building about 30 meters (100 feet) from the beach and held onto the fence as strong as I could, trying to resist the water, which felt like it would drag me back into the sea. I cried in fear … ‘This is a tsunami?’ I was afraid I would die.” 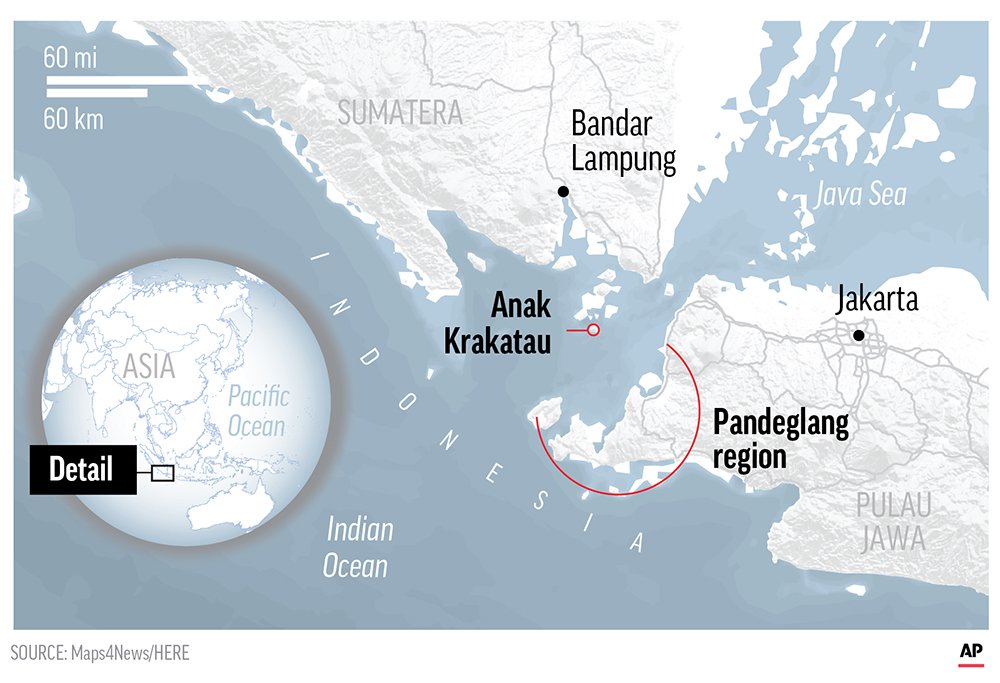 Dramatic video posted on social media showed the Indonesian pop band Seventeen performing under a tent on popular Tanjung Lesung beach at a concert for employees of a state-owned electricity company. Dozens of people sat at tables while others swayed to the music near the stage as strobe lights flashed and theatrical smoke was released. A child could also be seen wandering through the crowd.

Seconds later, with the drummer pounding just as the next song was about to begin, the stage suddenly heaved forward and buckled under the force of the water, tossing the band and its equipment into the audience.

The group released a statement saying their bass player, guitarist and road manager were killed, while two other band members and the wife of one of the performers were missing.

“The tide rose to the surface and dragged all the people on site,” the statement said. “Unfortunately, when the current receded, our members were unable to save themselves while some did not find a place to hold on.”

The worst-affected area was the Pandeglang region of Java’s Banten province, which encompasses Ujung Kulon National Park and popular beaches, the agency said.

“My deep condolences to the victims in Banten and Lampung provinces,” he said. “Hopefully, those who are left have patience.” 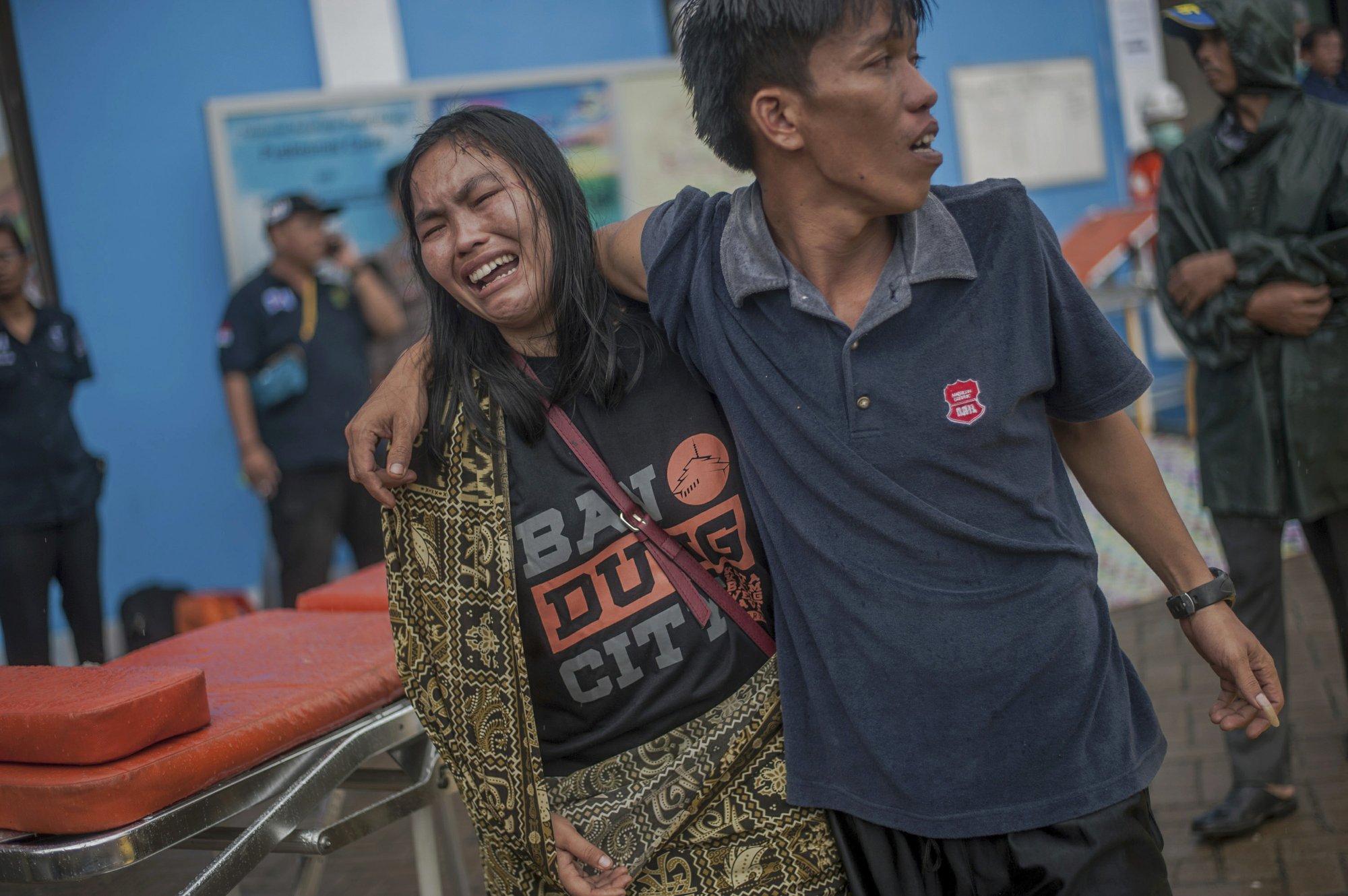 A woman cries after identifying a relative among the dead. (AP Photo/Fauzy Chaniago)

At the Vatican, Pope Francis prayed for the dead, the missing and the homeless in Indonesia, telling tourists and pilgrims in St. Peter’s Square that his thoughts were with victims “struck by violent natural calamities.”

In the city of Bandar Lampung on Sumatra, hundreds of residents took refuge at the governor’s office, while at the popular resort area of Anyer beach on Java, some survivors wandered in the debris.

Tourists who were enjoying the long holiday weekend ahead of Christmas were also affected.

“I had to run, as the wave passed the beach and landed 15-20m (meters, or 50-65 feet) inland,” said Norwegian Oystein Lund Andersen, in a Facebook post. The self-described photographer and volcano enthusiast said he was taking pictures of the volcano when he suddenly saw the water racing toward him. He and his family fled safely to higher ground. 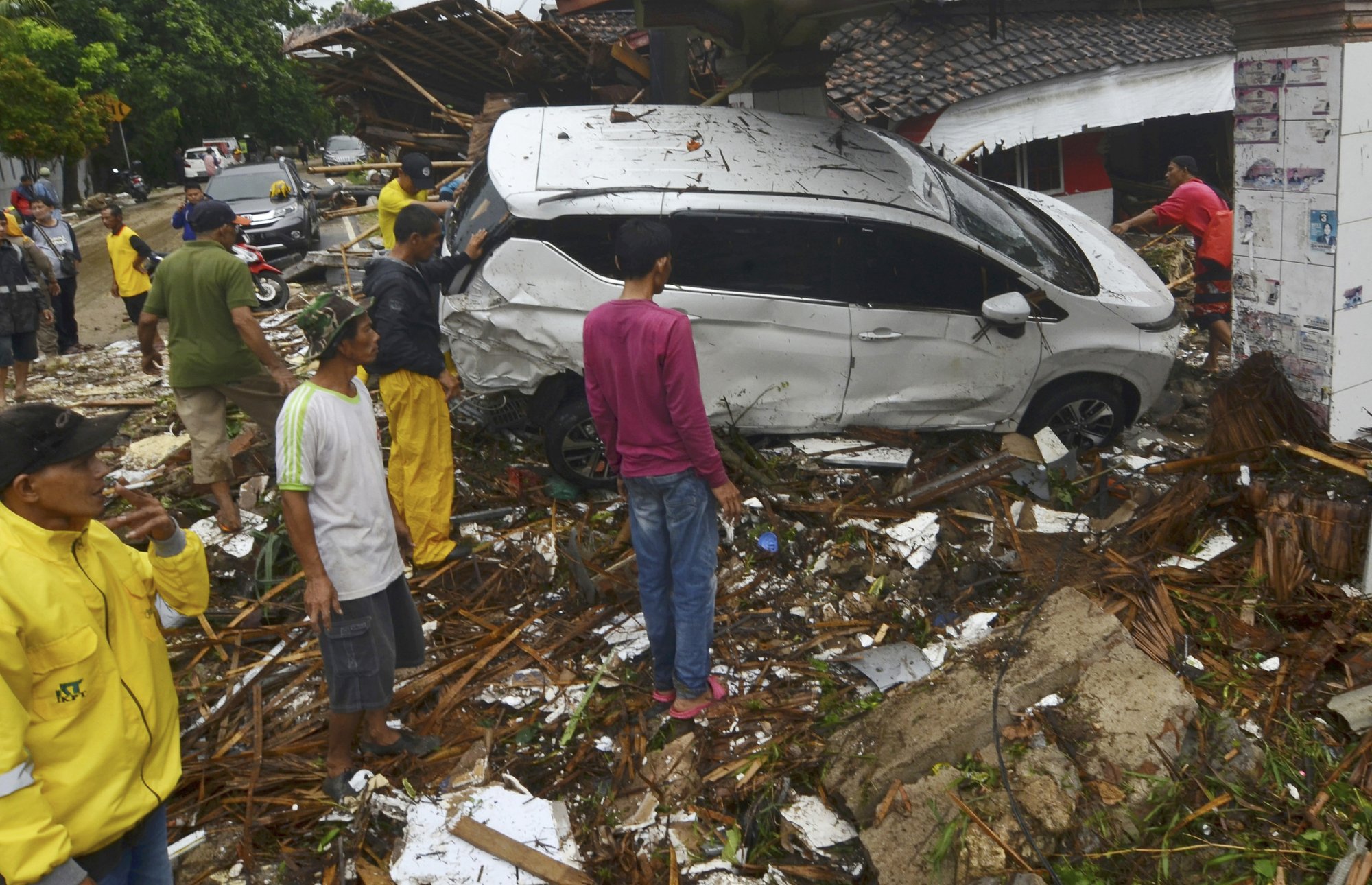 The damage became apparent after daybreak Sunday. Nine hotels and hundreds of homes were heavily damaged by the waves. Broken chunks of concrete and splintered sticks of wood littered hard-hit coastal areas, turning beach getaways popular with Jakarta residents into near ghost towns. Vehicles were tossed into the rubble or were buried under collapsed roofs. Debris from thatch-bamboo shacks was strewn along beaches.

Yellow, orange and black body bags were laid out, and weeping relatives identified the dead.

Scientists, including those from Indonesia’s Meteorology and Geophysics Agency, said the tsunami could have been caused by landslides — either above ground or underwater — on the steep slope of the erupting Anak Krakatau volcano. The scientists also cited tidal waves caused by the full moon.

The 305-meter (1,000-foot) -high Anak Krakatau, whose name means “Child of Krakatoa,” lies on an island in the Sunda Strait between Java and Sumatra islands, linking the Indian Ocean and the Java Sea. It has been erupting since June and did so again about 24 minutes before the tsunami, the geophysics agency said.

The volcanic island formed over years after the 1883 eruption of the Krakatoa volcano, one of the largest, most devastating in recorded history. That disaster killed more than 30,000 people, launched far-reaching tsunamis and created so much ash that day was turned to night in the area and a global temperature drop was recorded.

Most of the island sank into a volcanic crater under the sea, and the area remained calm until the 1920s when Anak Krakatau began to rise from the site. It continues to grow each year and erupts periodically although it is much smaller than Krakatoa. 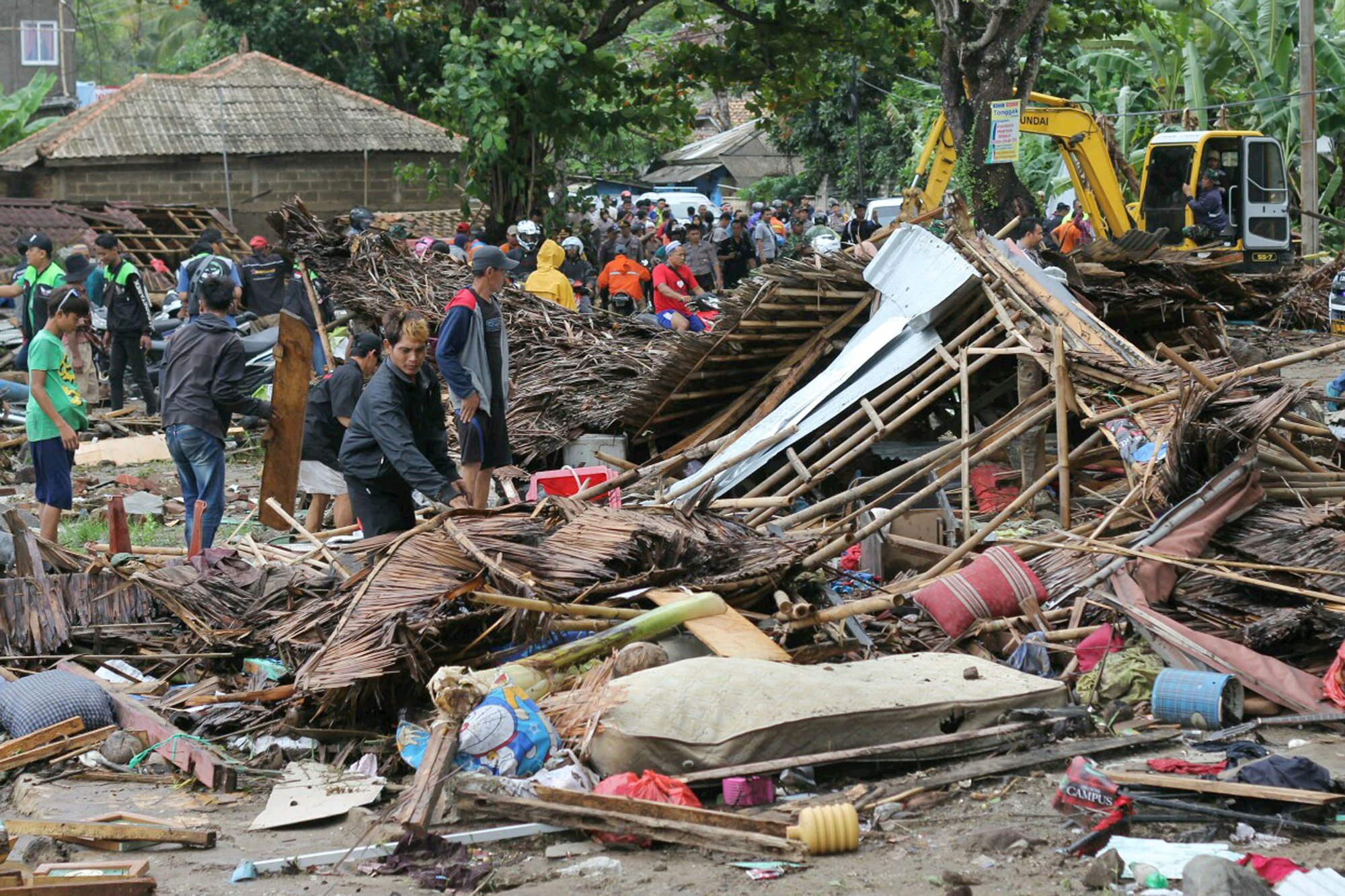 Gegar Prasetya, the co-founder of the Tsunami Research Center Indonesia, said Saturday’s tsunami was likely caused by a flank collapse — when a big section of a volcano’s slope gives way. It’s possible for an eruption to trigger a landslide above ground or beneath the ocean, both capable of producing waves, he said.

“Actually, the tsunami was not really big, only 1 meter (3.3 feet),” said Prasetya, who has studied Krakatoa. “The problem is people always tend to build everything close to the shoreline.”

Indonesia, a vast archipelago of more than 17,000 islands and home to 260 million people, lies along the “Ring of Fire,” an arc of volcanoes and fault lines in the Pacific Basin. Roads and infrastructure are poor in many areas of the disaster-prone country, making access difficult in the best of conditions.

Saturday’s tsunami also rekindled memories of the massive magnitude 9.1 earthquake that hit Indonesia on Dec. 26, 2004. It spawned a giant tsunami off Sumatra island, killing more than 230,000 people in a dozen countries — the majority in Indonesia.