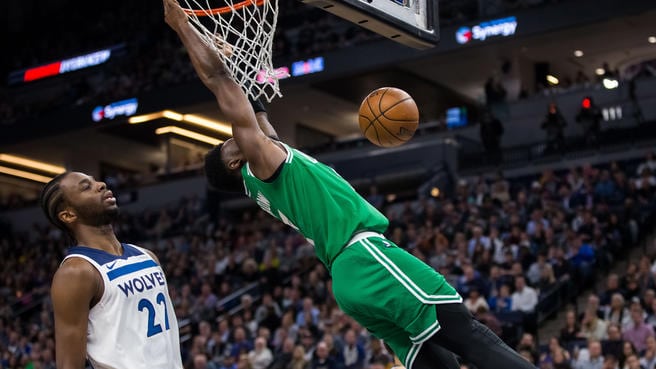 There was a sense of déjà vu for Celtics fans Thursday night, as they watched forward Jaylen Brown crash to the ground and land hard on his back and neck after a dunk in the third quarter against the Timberwolves.

The crowd at the Target Center went quiet, while Brown laid motionless on the ground. The Celtics’ medical staff immediately tended to Brown, and a stretcher was wheeled onto the floor. It would end up going unused, however, as Brown was able to walk — under his own power — off the court to the locker room, where he was “evaluated for concussion-like symptoms.”

Brown entered the league’s concussion protocol, but flew home to Boston with the team. Coach Brad Stevens said in his postgame press conference if doctors found any reason for concern, Brown would have stayed overnight in Minnesota.

“He felt pretty good leaving the arena, but he went to get a CT scan and whatever else,” Stevens told reporters. “Our trainer said when he left the locker room, he was moving and feeling OK and left in good spirits.”

Following the initial shock from witnessing the incident, Brown’s teammates all seemed relieved his injury wasn’t more serious. Having watched Gordon Hayward get carted off the court in the season opener, the team was thankful Brown did not experience the same fate.

“I was right there,” Al Horford said. “It was tough to see. I was just happy he was able to get up and walk off because that was one of the worst falls I’ve seen.”

“It was a huge relief just because we were worried about Jaylen’s health,” Horford continued. “Just seeing him get up, it put us all at ease to continue to play the game. If he hadn’t have gotten up, I don’t know how that would’ve been for our group.”